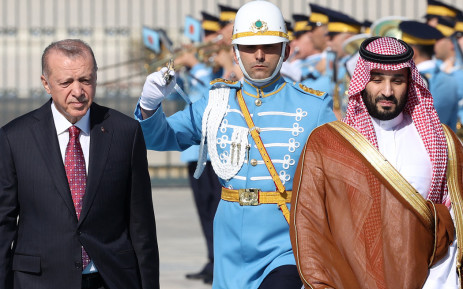 Egyptian President Abdel Fattah el-Sisi welcomed Saudi Crown Prince Mohammed bin Salman (MBS) on June 20 on his first stop of his Middle East tour that comes ahead of a visit from US President Joe Biden to Saudi Arabia next month.

During the two-day visit to Egypt, companies from both countries signed agreements worth a total of $7.7 billion.  MBS is a financial backer of the Egyptian government, with trade between Egypt and the kingdom up more than 62 percent last year compared with 2020, reaching $9.1 billion.

Egyptians working in Saudi Arabia are an important source of foreign currency as they send money back home to Egypt, which is struggling with inflation, huge infrastructure spending bills and a currency devaluation.

The Arab world’s most populous country, Egypt has a state budget of around $160 billion and is grappling with public debt reaching around 90 percent of gross domestic product.

Jordan’s King Abdullah II, a close ally of Saudi Arabia, welcomed MBS on his second stop of the tour.  Saudi Arabia and Jordan have close economic relations. Trade between the two countries amounted to roughly $4.4 billion dollars in 2021, up from around $3.1 billion in 2020. Saudi investments in Jordan are worth $14 billion, making Saudi Arabia the largest investor in Jordan.

Companies in the mining, construction, atomic energy, imports, exports, and other sectors signed cooperation deals. Saudi Arabia exports oil to Jordan, while the main Jordanian exports to Saudi Arabia are medicine and livestock.

The Jordanian economy is struggling with high unemployment, rising debts and weak investment.

Jordan-Saudi relations hit a rocky patch after allegations of Saudi Arabia’s involvement in Jordan’s royal feud last year. One of those arrested for the supposed plot against King Abdullah II is an adviser to MBS.

On June 22, Turkish President Erdogan welcomed MBS, aiming to repair their ruptured relationship which followed the 2018 killing of Washington Post journalist Jamal Khashoggi at the Saudi consulate in Istanbul.

Erdogan had visited Saudi Arabia in late April, which paved the way for MBS’s recent visit to Ankara.

The two countries emphasized their joint determination to usher in a new period of cooperation. Erdogan is seeking financial support that could help relieve Turkey’s beleaguered economy ahead of presidential elections slated for June 2023.

A Turkish official said the two countries had lifted restrictions on trade, flights and the screening of TV series, with negative media coverage between the two stopped.

Defense, energy and tourism sectors were the focus of improving cooperation in business, and Ankara invited Saudi investment funds to invest in Turkey.

Turkey’s economy is badly strained by a slumping lira and inflation soaring beyond 70 percent. Discussions about the possible sale of Turkish armed drones to Riyadh also took place.

A Saudi hit squad killed and dismembered Khashoggi in October 2018, according to a report by the CIA; however, MBS has denied any involvement in the murder.

Ankara halted its Khashoggi murder trial in April, and transferred the trial to Riyadh, while human rights groups have condemned the move.

Biden to visit MBS next month

Biden is set to visit Saudi Arabia next month, despite previously calling the kingdom a “pariah” state.  Biden’s administration has released conflicting statements concerning who his is willing to meet with there, and which hands he will shake, or shun.

MBS is acutely aware that the US military did not prevent the massive attack on the Aramco oil production facilities that knocked them off production for months, despite funding the American military presence in the kingdom.

The LIV Golf Series is pioneered by LIV Golf Investments with former World No. 1 Greg Norman as its CEO. LIV Golf Investments are financially backed by Saudi Arabia’s Public Investment Fund, one of the world’s largest sovereign wealth funds, which is chaired by MBS.  Assets included, it is said to be worth in excess of $620 billion.

The LIV Golf Invitational Series got underway at Centurion Club, near London, in June, with the second event due to be played in Portland, USA, from June 30.

MBS began his rise in 2015, and since then has led a comprehensive change aimed at opening up the kingdom’s economy and culture

In March, MBS, Chairman of the NEOM Company Board of Directors, announced TROJENA, the new global destination for mountain tourism, as part of NEOM’s plan developing the tourism sector.

Outdoor skiing is a unique feature of TROJENA that will provide a unique experience in NEOM with a ski village, ultra-luxury family and wellness resorts, retail stores and restaurants, in addition to sports activities, including a ski slope, water sports and mountain biking, as well as an interactive nature reserve. The project is set for completion by 2026 in Saudi Arabia’s north-western Tabuk region.

The NEOM project is funded primarily through $500 billion allocated by Saudi Arabia’s Public Investment Fund and plans to welcome residents in 2024 and make the city home to millions by 2030.

The United Arab Emirates, a close regional ally of Saudi Arabia, has called for Syria to return to the Arab League and has opened its embassy in Damascus.

Riyadh has been reluctant to restore relations with Syria because the US is opposed to normalizing relations with Damascus after the US-NATO attack for regime change has failed.

MBS has proven to be resilient to pressure from Washington, and may make a decision to bring Syria in from the cold.