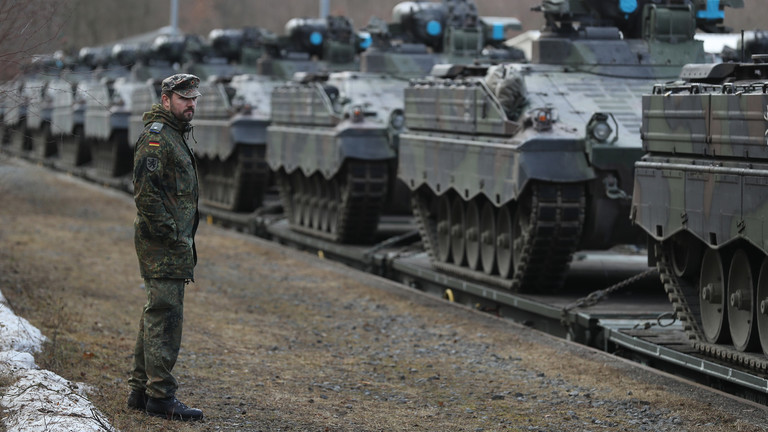 Berlin has allegedly suggested having key infrastructure near the Russian border, but wants troops stationed in their home countries

Germany has reportedly objected to the idea of sending several thousand more NATO troops to the alliance’s Eastern flank, suggesting an alternative scheme instead.

German Chancellor Olaf Scholz proposed stationing support units and fuel stocks in the Baltic states and Poland, but did not back the deployment of entire additional brigades to the countries, according to a report in Die Welt. The majority of troops, according to Scholz’s plan, would remain in their home countries at full combat readiness, only conducting short-term maneuvers in the country whose security they are supposed to enhance.

As part of NATO’s Enhanced Forward Presence, the military bloc is planning to send an additional 5,000 troops each to Poland, Estonia, Latvia and Lithuania, Die Welt reported. According to the article, German troops will support Lithuania, UK troops – Estonia, and Canada will bolster Latvia, while the US already has a brigade-strong contingent stationed in Poland.

However, deploying so many soldiers would be costly, and the three supporting nations are already low on fully equipped brigades, Die Welt reported.

Lieutenant-general Heinrich Brauss, a former high-ranking NATO official, told the outlet that the German military will only be able to provide such support in the coming years. This is apparently the case for other European NATO member states as well.

It is these problems that reportedly led Chancellor Scholz to propose the alternative scheme.

Unnamed “NATO diplomats” are cited by Die Welt as lauding Berlin’s plan as a “flexible, concentrated deployment,” that offers the opportunity to also re-dispatch troops to other battlefields, if necessary.

Berlin, however, has yet to convince the UK and Canada to agree to this model during the ongoing NATO summit in Madrid, the article claims.

The Baltic states are reportedly unhappy with the prospect of only having truncated brigades on their territories. According to Die Welt, Tallinn, Vilnius and Riga fear that without additional forces, they will be more easily occupied by an invading Russian army, in case of war.

The outlet went on to describe the three nations as NATO’s “Achilles heel” in the East due to their proximity to mainland Russia and its exclave, Kaliningrad region. Russian troops could take the region sooner than the military alliance could deploy adequate reinforcements from Central Europe, the journalists claim. In this scenario, the Baltic nations would only be liberated from Russian forces as part of a counter-offensive.

Shortly after Russia attacked Ukraine in late February, NATO expanded its presence on its Eastern flank. The number of troops in each of the international battle groups stationed in the Baltic states and Poland rose from 800 to more than 1,000. NATO combat units of a similar size were stationed in Slovakia, the Czech Republic, Hungary and Romania.