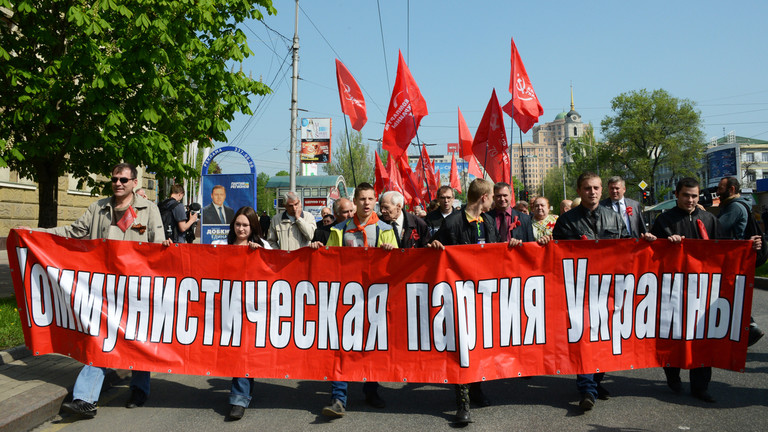 A court has banned two more parties, including the communists, bringing the total number of outlawed political groups to 15

A Ukrainian court on Tuesday banned the country’s Communist Party (CPU), marking the end of an eight-year saga, and adding the communists to the blacklist of 15 allegedly ‘pro-Russian’ political movements that are outlawed in Ukraine.

The Eighth Administrative Court of Appeal in the western city of Lviv announced that “the activities of the Communist Party of Ukraine are prohibited.”

“Funds and other assets” of the party will be nationalized.
Attempts to ban the party started in 2014, when the acting president at the time, Aleksandr Turchinov, ordered a review into the CPU’s activities. He did not rule out the possibility of banning it over its alleged involvement in protests in the eastern parts of the country after the violent Western-backed coup in Kiev overthrew the democratically-elected government.

The party was formally outlawed in December 2015 by the District Administrative Court of Kiev. The court ruled that it “performs actions aimed at changing the constitutional order by force, violating the sovereignty and territorial integrity of the country, propagating violence, inciting interethnic hatred.” The Justice Ministry’s resolution on non-compliance of symbols and charter of the party with the law was also upheld.

The party appealed the verdict and thus the court decision could not enter into force. In May of this year, the court finally completed consideration of the appeal and denied it. Tuesday’s court decision finalized the process.
On the same day, along with the Communist Party, the ‘Happy Ukraine’ party was banned.

Commenting on the court’s decisions, the Justice Ministry said that, as of today, “the activity of 15 pro-Russian political parties in Ukraine has been banned.”

In March, following the launch of Russia’s military operation, Ukrainian President Volodymyr Zelensky moved to suspend the activities of almost a dozen opposition parties, including the parliament’s second-largest group, Opposition Platform – For Life. All of them are now on the Justice Ministry’s list of banned parties.