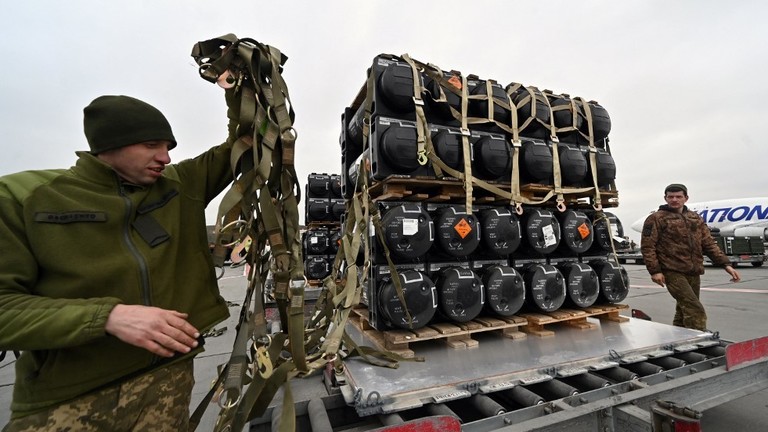 The shipment will include 1,600 anti-tank weapons and 50,000 artillery shells

The UK will also send 1,600 anti-tank weapons as well as drones, including hundreds of “loitering aerial munitions,” more commonly known as “suicide drones.”

The arms will be sent to Ukraine in the coming weeks, and Wallace’s announcement comes several weeks after outgoing Prime Minister Boris Johnson pledged an additional £1 billion ($1.2bn) in military support to Vladimir Zelensky’s government. In total, the UK has spent £2.3 billion on weapons and training for Kiev’s military since Russia’s military operation in Ukraine began in February.

This money has already paid for nearly 7,000 NLAW, Javelin and other anti-tank missiles, 16,000 artillery rounds, six mobile anti-air missile launchers, as well as a number of M270 rocket artillery systems and 120 armored vehicles.

The impact of these shipments on the battlefield, however, has been debatable. Captured Ukrainian troops have described the Javelin missile launchers – sent by both the UK and the US – as “completely useless” in urban combat, while soldiers are reportedly encountering battery issues with the NLAW “making it impossible to use.” Russia’s military doctrine also favors heavy artillery bombardment of enemy positions from far beyond the NLAW’s 600 meter range.

Both sides have leaned heavily on artillery as fighting rages on in eastern Ukraine and the Republics of Donetsk and Lugansk. Utilizing superior firepower, Russian and allied troops recently brought the entirety of the Lugansk People’s Republic under their control and seized operational control of Seversk, which is within striking distance of the major cities of Slavyansk and Kramatorsk.

Ukraine has received a dozen M142 HIMARS rocket artillery systems from the US. While US Defense Secretary Lloyd Austin described these weapons as making “such a difference on the battlefield,” Ukrainian Defense Minister Alexey Reznikov claimed this week that his forces need at least 50 of the systems to hold back Russia’s advances and 100 – around a third of the US’ entire stockpile – to conduct a counteroffensive.

In terms of conventional artillery, the 50,000 shells promised by Wallace is enough to keep Ukraine’s guns firing for roughly eight days. As of last month, Ukraine’s deputy head of military intelligence estimated that his forces were expending 6,000 shells per day, and that Ukraine has one artillery gun for every 15 fielded by Russia.

Meanwhile, a report by the Royal United Services Institute, a British think tank, claims that Russia is firing approximately 20,000 artillery shells per day.