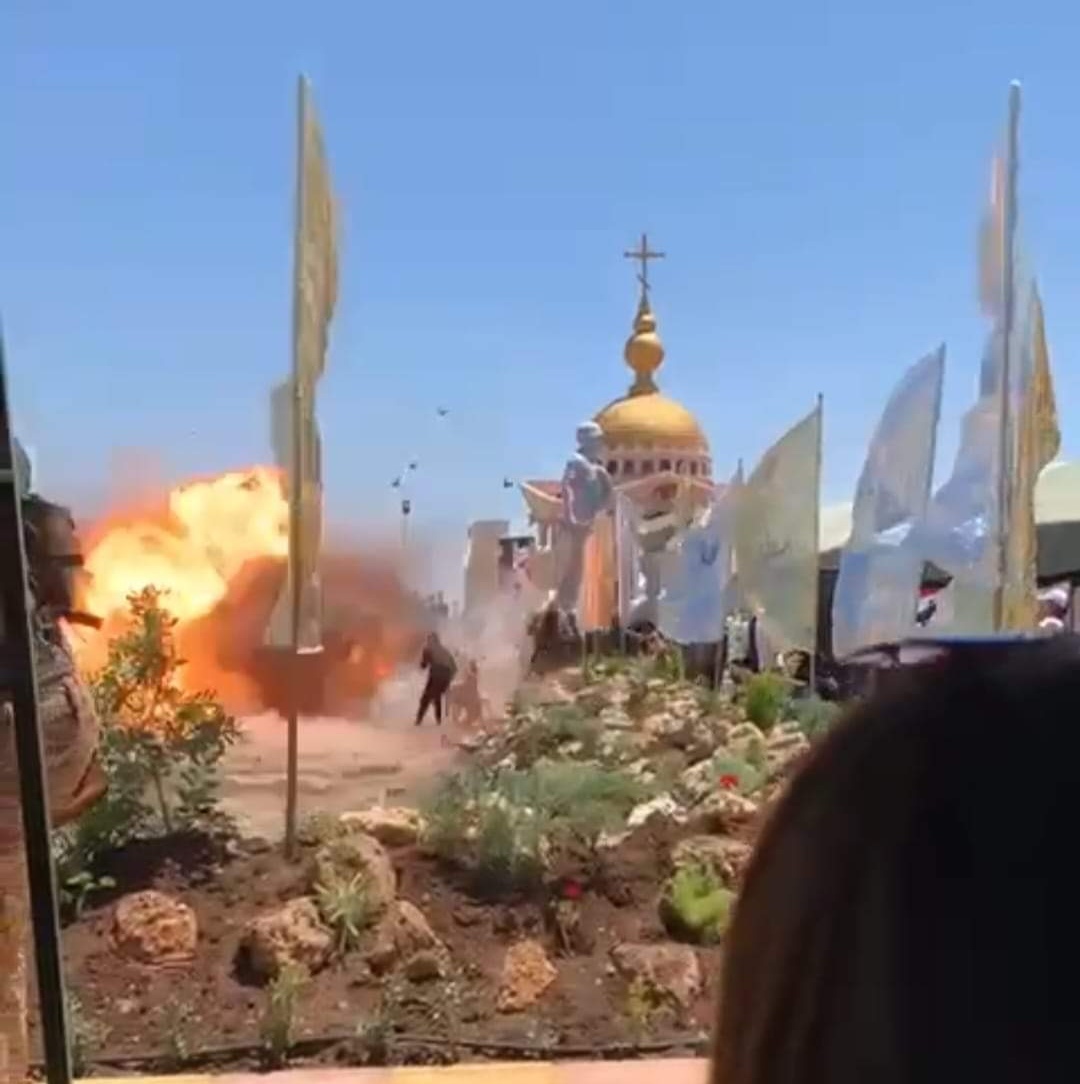 The Hagia Sophia Church in Al-Suqaylabiyah, Syria was attacked by Radical Islamic terrorists using a drone which was launched from the terrorist controlled enclave of Idlib on July 24.  Two persons were killed while 12 others were wounded. The Syrian Observatory of Human Rights (SOHR) confirmed the attack from their UK office, and the Syrian Arab News Agency (SANA) also reported locally. Hisham Fahed Elias was one of those killed in the drone attack.

The Greek Orthodox church was holding an inauguration ceremony at the time of the attack.   Hundreds of churches in Syria have been destroyed or damaged by terrorists who began a US-NATO sponsored attack on Syria for regime change.

The church is located in the Hama province adjacent to the Idlib province, which is under the occupation and control of Hayat Tahrir al-Sham, formerly known as Jibhat al-Nusra, the Al Qaeda affiliate in Syria.

Recently, the UN security council agreed on the process of delivering humanitarian aid to Idlib. There are about three million civilians living there, among the terrorists and their families and supporters.  Experts question the stalemate in Idlib, which prevents the attack on terrorists there, while prolonging millions as hostages and human shields.

The Obama administration began the war in 2011 but failed to overthrow the government of Syria, though the administrations of Trump and Biden have equally failed in the US plan to install the Muslim Brotherhood to power in Damascus.  A similar US plan was successful in Egypt, but a peoples’ revolution brought down the US-backed Morsi government.

Who are the terrorists who attacked the church?

According to the BBC, the last remaining terrorist held territory in Syria is Idlib province, and Hayat Tahrir al-Sham controls the area in an Islamic administration, as did ISIS previously in Mosul and Reqqa.

The terrorists are under military protection of Turkish occupation forces who have built numerous military outposts in Idlib which prevent the Syrian government forces, or their allies the Russians from attacking and liberating the civilians held against their will.

Why do the US-EU and Turkey protect the terrorists and stalemate of Idlib?

The US and EU are supporting the occupation of Idlib as a bargaining chip in the future political negotiations to solve the Syrian crisis.  Turkey is a member of NATO and an ally of both the US and EU.  Turkey’s President Erdogan and his ruling AKP party are followers of the Muslim Brotherhood.

During the Syrian conflict which began in 2011, the US government worked closely with the Turkish administration to funnel both weapons and Al Qaeda fighters into northern Syria from Turkey.  In 2017, Trump shut down the CIA operations in Turkey which supported the terrorists fighting in Syria.

According to the BBC, Syria’s Christian community is one of the oldest in the world, going back two thousand years. The apostle Paul was converted to Christianity in Damascus, while some Christians from the town of Maaloula still speak Aramaic, the language of Jesus.

Thousands of Christians in Syria were forced from their homes as Radical Islamic terrorists took over areas and ordered Christians to convert to Islam, pay a tax, or be killed. Clerics were kidnapped and killed by ISIS and Al Qaeda in Idlib and elsewhere.

Christians are believed to have constituted about 30% of the Syrian population as recently as the 1920s, but today number only about 10% of Syria’s 22 million people. Christians have held high political offices and high military ranks since 1963.

ISIS is embedded in Idlib

Recently, the SOHR, from the UK, published a report which proves that the areas under Turkish occupation, such as Idlib, are ‘hotbeds of terrorists’.

The report points out that nearly 50 terrorists were killed in areas under the control of Turkish forces and their mercenaries in the past few years, concluding that such areas have become the ‘most prominent hotbeds of terrorist and extremist groups such as ISIS, Al-Qaeda, and other jihadist groups’.

The report begins from the death of Islamic State (ISIS) leader Abu Bakr Al-Baghdadi who was hunted down by US forces 27 October 2019 in Idlib.

It goes on to give a list of 48 Syrian and non-Syrian jihadists, including leaders and senior members of ISIS, Hurras Al-Din and Al-Qaeda, who were killed in Idlib and other areas under Turkish military occupation.

Abu Bakr al-Baghdadi, the head of ISIS, killed on 27 October 2019 in Idlib

As an example of close ties between terrorists and Turkish forces, the report notes that a senior ISIS official, explosive expert and drone specialist, the son of an assassinated ISIS leader known as ‘Fawaz Al-Kurdi’, was arrested by US forces on June 2022 in the village of Al-Hamirah in the countryside of Jarablus, four km from the Turkish border. The report states that Hani Al-Kurdi has been living in an area controlled by Turkey for a long time, and owned oil trucks.

The report said: “SOHR points out that the most of ISIS leaders and members entered areas controlled by ‘National Army’ and ‘Hayat Tahrir Al-Sham’ with the protection and complicity of leaders of the Turkish-backed ‘National Army.’ Some ISIS members and leaders entered those areas after paying huge sums of money to Turkish-backed commanders.”

“It has become as clear as daylight that Turkish forces-held areas in Idlib, northern and eastern countryside of Aleppo and areas in the countryside of Al-Hasakah and Al-Raqqa are the most prominent hotbeds of terrorist and extremist groups such as ISIS, Al-Qaeda, and other jihadist groups that are overtly or covertly affiliated with Al-Qaeda.”

It is apparent, that the terrorists in control of Idlib are harboring ISIS leaders and officials on a very regular basis.  If the UN charter states that all UN members must kill Al Qaeda and ISIS anywhere on earth they exist, then why is the UN, US and EU protecting Idlib?