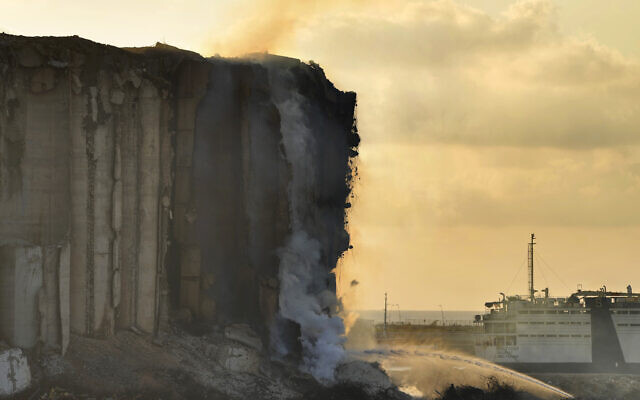 Part of Beirut port’s silos in Lebanon, which were damaged in the 2020 blast, has collapsed.

Part of Beirut port’s massive grain silos collapsed on Sunday following a fire that has been burning for weeks.

Footage posted on social media platforms showed the section collapsing and causing a giant dust cloud in what sounded like an explosion, Deutsche Welle reported.

Most of the port’s silos were severely damaged during the 2020 blast that rocked the city. The northern block, which collapsed on Sunday, had shielded the western part of the city from the explosion that killed more than 200 people and wounded over 6,000 others two years ago.

The collapse comes four days before the Lebanese capital marks the two-year anniversary of the explosion.

What did officials say?

The general director of the port silo, Assad Haddad, told The Associated Press news agency that “everything is under control.”

In July, a fire broke out in the 50 year old structure. Firefighters along with the Lebanese army were unable to douse the flames, which continued to smolder for weeks.

Najib Mikati, Lebanon’s caretaker prime minister, had warned this week that the northern silos could fall, adding that they still contained thousands of tones of wheat and corn.

Mikati said he told the army to be prepared and warned workers, civil defense members and firefighters to keep a safe distance from the site.

In April, the Lebanese government ordered the demolition of the remaining silos due to safety concerns. However, the move was suspended amid objections from relatives of blast victims who want the silos preserved as a memorial site.