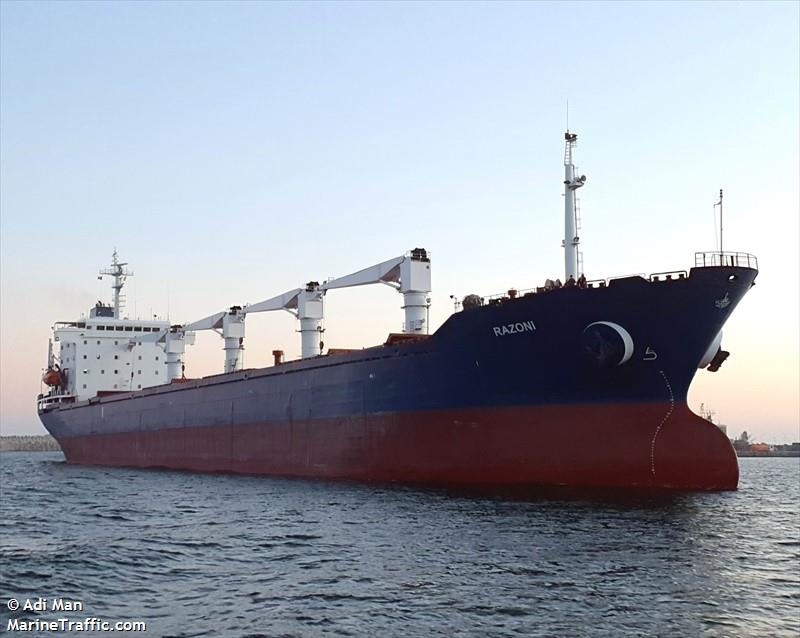 On August 1, the first cargo ship with grain left Ukraine since the beginning of Russian military operations in February.

Amid the ongoing hostilities in Eastern and Southern Ukraine, the first cargo ship with 26 thousand tons of corn left the port of Odessa. The cargo ship Razoni under the flag of Sierra Leone is heading to Lebanon. It is due to arrive in Istanbul on August 2, the Turkish Defense Ministry said.

According to the Marine Traffic vessel tracking service, the cargo ship was accompanied by the towing vessel Bulat under the flag of Ukraine

A safe corridor for grain exports by sea has been created within the framework of the agreement signed on July 22. According to the reached agreements waters under Ukrainian control will not be de-mined as it would take too much time. The military of either side should not accompany cargo ships. Representatives of Turkey and the UN will monitor the loading, and a quadrilateral coordination center will check vessels at the entrance and exit to the Black Sea.

Full-fledged grain  export through the ports of Odessa, Chernomorsk and Yuzhny controlled by Ukraine may begin in the coming weeks.

Amid the departure of the first cargo ship from Ukraine, the Kiev regime seems to have begun to prepare public opinion in Ukraine for the upcoming food crisis in the country.

The grain harvest in Ukraine in 2022 may be halved from the usual indicators, Ukrainian President Volodymyr Zelensky wrote on Twitter on July 31.

“Our main goal is to prevent a global food crisis caused by the Russian invasion,” he added.

Zelensky also wrote that the search for alternative ways of supplying Ukrainian grain is now continuing.

Celebrating the start of grain export, Ukrainians forget that the ongoing military actions, loss of control of fertile southern regions as well as agricultural crisis that Ukraine faced before the beginning of hostilities put the Ukrainians at risk. Already in January 2022, due to the shortage of grain, Ukrainian enterprises were forced to purchase cheap Turkish flour. LINK

Moreover, in June, Turkish Agriculture Minister Vahit Kirishchi claimed that an agreement has been reached with Ukraine on the purchase of grain with more than 25% discount. Thus, Kiev sells the meager harvest of the current year to Turkey at a huge discount.

In exchange for weapons and illusory prospects of becoming a member of the “European family”, the Kiev regime is dooming its own people to a protracted food crisis.

Ukraine has already started to sell the grain from its strategic reserves. LINK Together with critical problems in other spheres of agriculture that aggravated long before the Russian military operations, the ongoing policy of the Kiev regime risks to provoke a famine in Ukraine. In this case, Russia will be blamed for another “holodomor” which in fact would be intentionally created by Kiev.