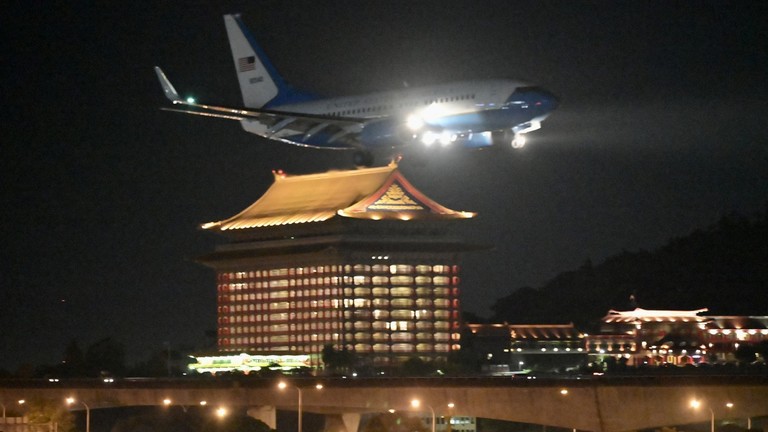 A US military aircraft with US House Speaker Nancy Pelosi on board prepares to land at Sungshan Airport in Taipei on August 2, 2022. © AFP / Sam Yeh

The US house speaker’s visit is a violation of the ‘One China’ policy and the country’s sovereignty, Beijing says

“This is a serious violation of the one-China principle and the provisions of the three China-US joint communiqués. It has a severe impact on the political foundation of China-US relations, and seriously infringes upon China’s sovereignty and territorial integrity,” the Chinese Foreign Ministry said in a statement.

The visit of the top official “undermines peace and stability across the Taiwan Strait, and sends a seriously wrong signal to the separatist forces for ‘Taiwan independence’,” the ministry added, urging Washington not to “go further down the wrong and dangerous path.”

The ministry also warned of unspecified “measures” Beijing was set to take in light of Pelosi’s visit, squarely blaming the potential consequences of it on Washington.

“China will definitely take all necessary measures to resolutely safeguard its sovereignty and territorial integrity in response to the U.S. Speaker’s visit. All the consequences arising therefrom must be borne by the U.S. side and the ‘Taiwan independence’ separatist forces,” it said.

China firmly opposes and sternly condemns this, and has made serious démarche and strong protest to the United States.

Following days of uncertainty over her visit, Pelosi touched down on the island late on Tuesday in spite of repeated warnings from Beijing against the visit. The island nation, regarded by Beijing as an integral part of China, was not listed among the official destinations of the speaker’s Asian tour, which included Singapore, Malaysia, South Korea, and Japan.