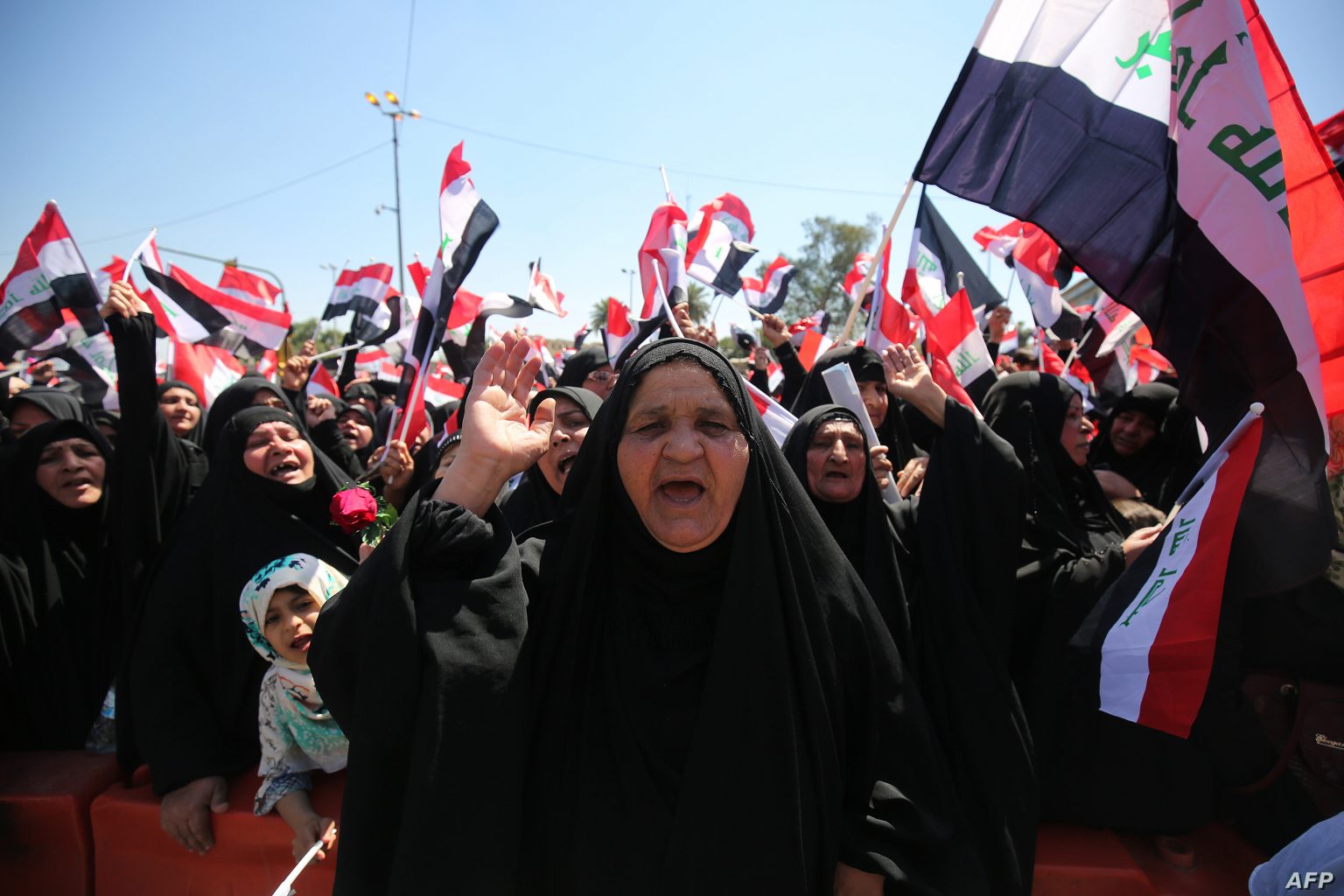 Iraqis occupy parliament to demand an end to corruption

Yesterday, Muqtada al-Sadr urged his supporters to continue protests at the Iraqi parliament in Baghdad.  The Muslim cleric has a large support base who demand the dissolution of parliament and a call for early elections.

Iraq has been suffering under a political stalemate that has prevented an elected government for almost 10 months.

Thousands of protesters entered and occupied the parliament which sits within the Green Zone last weekend.  The move was in response to attempts by a rival political faction to form a government with prime ministerial candidates unacceptable to Sadr and his followers.

The last election was held in October and Sadr won the largest bloc of seats in parliament, but was unable to form a government which would exclude his rivals. Sadr withdrew his members of parliament, and turned to the strategy of protests and the parliament occupation to achieve a change in the stalemate.

Sadr claims past dialogue has not achieved anything.  He said, “But we have already tried and experienced dialogue with them,” he added. “It has brought nothing to us and to the nation – only ruin and corruption.”

Outgoing Prime Minister Mustafa al-Kadhimi and President Barham Saleh have stressed the importance of “guaranteeing security and stability” in the country.

Why did they occupy the parliament?

Raed Jarrar is an Iraqi-American political advocate based in Washington, DC.  He was born in Baghdad and lived through the US invasion and total destruction of his country.  He told Al Jazeera TV recently, that the answer to Iraq’s current crisis is to end the sectarian quota system, end corrupt politicians, and end foreign meddling in Iraq.

Is Iraq a democracy?

After the US invasion of Iraq, the US government and their media outlets promoted the idea that the US was bring American style democracy to Iraq after removing a brutal dictator.  That never happened.  The Economist Intelligence Unit rated Iraq an “authoritarian regime” in 2019. The US officials in charge of inventing the Iraq government after the invasion, devised a very un-American governing system.  It has a multi-party system which keeps divisions and chaos center stage, while the Prime Minister, President, and the parliament all fight against each other vying for their own interests amid party and sectarian allegiances.  Under this un-American, but American-made system, it is almost impossible to get any worthwhile changes made.

Imagine in the US if congressional seats were divided by Jews, Christians, Muslims, Buddhists, Hindus and Atheists.  Iraq is made up of numerous religious groups, and in the 2021 parliamentary election held in October, the political bloc led by Shia leader Muqtada al-Sadr was confirmed the winner after having won a total of 73 out of the 329 seats in the parliament. The Taqadum, or Progress Party-led by Parliament Speaker Mohammed al-Halbousi, a Sunni – secured 37 seats. Former Prime Minister Nouri al-Maliki’s State of Law party got 33 seats in parliament. Al-Fatah alliance, whose main components are militia groups affiliated with the Iran-backed Popular Mobilisation Forces, sustained its crushing loss and snatched 17 seats. The Kurdistan Democratic Party (KDP) received 31 seats, and the Patriotic Union of Kurdistan (PUK) gained 18.

Iraq’s is the most corrupt government in the Middle East, according to Transparency International, and is described as a “hybrid regime” between a “flawed democracy” and an “authoritarian regime”.

Brown University published the 2011 report “Costs of War”, in which concluded the US military presence in Iraq has not been able to prevent corruption, noting that as early as 2006, “there were clear signs that post-Saddam Iraq was not going to be the linchpin for a new democratic Middle East.”

Following the 2003 US invasion of Iraq, the main foreign players have been the US and Iran, though to a lesser extent Saudi Arabia and Israel have destabilized the country as well.

The use of Iraq as a proxy field for regional and international political conflict has resulted in a failed state. This has also formed fertile ground for extremist religious movements such as ISIS. Only by transforming Iraq into a successful state, can it eliminate terrorism.

Are US troops withdrawn from Iraq?

In January 2020, Iraq’s parliament voted to oust all US troops, and crowds chanted,”Baghdad is free, out with America.”  Finally, by December 9, 2021 US combat troops were withdrawn, but a contingent of 2,500 troops remain in an advisory and assistance role.

The effects of the US invasion on Iraq

“Iraq and Afghanistan and other places that the U.S. government have been interfering in have been destroyed because of U.S. intervention, but that wasn’t necessarily because of a series of mistakes or ignorance. In many cases that was the plan. …Many of the crimes that were committed were premeditated,” according to Raed Jarrar.

Michael Ledeen has said, “One can only hope that we turn the region into a cauldron, and faster, please. If ever there were a region that richly deserved being cauldronized, it is the Middle East today. If we wage the war effectively, we will bring down the terror regimes in Iraq, Iran, and Syria, and either bring down the Saudi monarchy or force it to abandon its global assembly line to indoctrinate young terrorists. That’s our mission in the war against terror.”

Ledeen was known as one of The Vulcans who also included John Bolton, Douglas Feith, Richard Perle, Paul Wolfowitz, Donald Rumsfeld, and David Wurmser who signed an “An Open Letter to the President” to lobby Bill Clinton to remove Hussein from office. Clinton declined to act, but President George W. Bush was willing to destroy Iraq based on a lie.

Iraq is the second highest oil producer in OPEC, has one of the biggest oil reserves in the world, and will continue to be of utmost geostrategic significance for the global economy.

Has Iraq recovered from the US invasion on Iraq?

Iraq has never recovered from the US invasion, which destroyed water, electricity, medical, food and education infrastructures which were highly stable and productive prior to the US attack. The US invasion caused the growth of terrorist organizations in Iraq and Syria which had never previously existed. Those terrorists created by the invasion have threatened the US, Europe and the world.

In 2008 the US began to gradually reduce the number of its troops in Iraq, completing its withdrawal in December 2011. However, the US re-entered Iraq at the request of the government to fight ISIS.  Eventually, ISIS was defeated in both Iraq and Syria.  The small number of US troops in Iraq might be accepted by Iraqis, but the Syrian people view the US occupiers as Thaieves by withholding the oil fields from Syrian use, which has Syrian households suffering with just one hour of electricity per day.