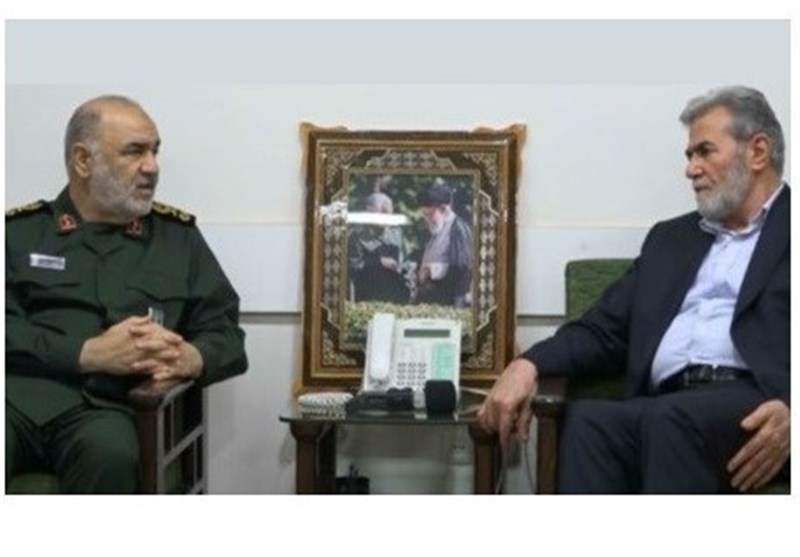 The commander of the Islamic Revolution Guards Corps lauded the Palestinian resistance groups for developing the power to deal with large-scale wars against Israel, saying the collapse of the Zionist regime may not even require a war.

In a meeting with Secretary General of the Gaza-based Islamic Jihad movement Ziad al-Nakhala in Tehran on Saturday, Major General Hossein Salami described the liberation of Palestine as a definite strategy.

“Our goal and strategy is to liberate holy al-Quds and return the lost and occupied territories of Palestine to its true owners,” the IRGC commander said.

Hailing the Palestinian resistance groups for boosting their power, the general said the potential and active capacities of the resistance indicate that it has become capable of handling big wars.

“The course of developments in occupied Palestine and the decline of power of Zionists, who are moving towards downfall and collapse, is a one-way road, and the liberation of holy al-Quds is in sight by God’s grace,” General Salami stated.

“The surge in the inherent weaknesses of the Zionist regime has psychologically pushed it into the path to decay and weakness constantly, in such a way that it is facing a dark and horrendous prospect ahead,” he added.

There is every indication that the Zionists are falling apart from within, the IRGC chief stated, adding that the collapse of Israel may not even need the Palestinian resistance to engage in a war.

Lauding the unity and solidarity among all Palestinian groups in the battle against the Zionist regime, the IRGC commander reaffirmed the Islamic Republic’s commitment to continue and broaden support for the Palestinian resistance.

Major General Salami also condemned the Zionist regime’s criminal and aggressive move to attack the Gaza Strip on Friday, saying, “Undoubtedly, the rapid response from the Islamic resistance of Palestine to this crime indicates that the new chapter of gaining power in the resistance current has started, and the Zionists will pay another heavy price for the recent atrocity.”

At least 15 people, including Tayseer al-Jabari, a senior commander of the Islamic Jihad movement, and a five-year-old child, have been killed in an airstrike by Israel on a center affiliated with the resistance movement in a residential area in the besieged Gaza Strip on Friday, only days after the regime arrested a senior figure of the group.

The Palestinian Health Ministry said well over 80 people were also injured in the attack in Rafah. The Islamic Jihad has fired more than 100 rockets toward the occupied territories in response to the Israeli strike.