Around 30% of Western weapons make it to Ukrainian troops – media 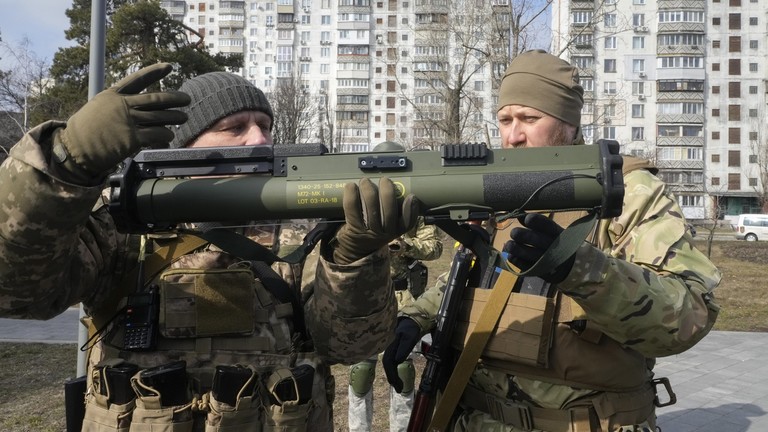 The US appears to be repeating the mistakes of Afghanistan, Iraq, and Syria

With the US and its allies pledging unprecedented levels of military support to Ukraine, a recent CBS News report suggested that only around 30% of the weapons sent by the West actually make it to the front lines. The report adds to ongoing rumors of waste, corruption, and black market profiteering.

The US has approved more than $54 billion of economic and military aid to Ukraine since February, while the UK has committed nearly $3 billion in military aid alone, and the EU has spent another $2.5 billion on arms for Kiev. An entire spectrum of equipment, from rifles and grenades to anti-tank missiles and multiple launch rocket systems have left the West’s armories for Ukraine, with most entering the country through Poland.

However, this rarely goes smoothly, CBS News revealed this week.

“All of this stuff goes across the border, and then something happens, kind of like 30% of it reaches its final destination,” Jonas Ohman, the founder of a Lithuania-based organization supplying the Ukrainian military, told the American network. Ohman said that getting the weapons to the troops involves navigating a complex network of “power lords, oligarchs [and] political players.”

“There is really no information as to where they’re going at all,” Donatella Rovera, a senior crisis adviser with Amnesty International, told CBS. “What is really worrying is that some countries that are sending weapons do not seem to think that it is their responsibility to put in place a very robust oversight mechanism.”

Ukraine insists that it tracks each and every weapon that crosses its borders, with Yuri Sak, an adviser to Defense Minister Alexey Reznikov, telling the Financial Times last month that reports to the contrary “could be part of Russia’s information war to discourage international partners from providing Ukraine with weaponry.”

However, some officials in the West have sounded alarm bells. A US intelligence source told CNN in April that Washington has “almost zero” idea what happens to these arms, describing the shipments as dropping “into a big black hole” once they enter Ukraine. Canadian sources said last month that they have “no idea” where their weapons deliveries actually end up.

Europol has claimed that some of these weapons have ended up in the hands of organized crime groups in the EU, while the Russian government has warned that they are showing up in the Middle East. An investigation by RT in June found online marketplaces where sophisticated Western hardware – such as Javelin and NLAW anti-tank systems or Phoenix Ghost and Switchblade explosive drones – was apparently being sold for pennies on the dollar.

Ukraine is consistently ranked as one of the most corrupt countries in the world, scoring 122/180 on Transparency International’s 2021 ‘Corruption Perceptions Index’, where 180 represents the most corrupt and 0 the least.

In Washington, drawing attention to this corruption is frowned upon by both parties in Congress. Representative Victoria Spartz, a Ukrainian-born lawmaker, has reportedly been cautioned by her colleagues and the White House for suggesting that Congress should establish “proper oversight” of its weapons shipments due to the alleged corruption within Vladimir Zelensky’s government.

“If you provide supplies, or a logistics pipeline, there has got to be some organization to it, right?” Andy Milburn, a retired US Marine colonel, told CBS. “If the ability to which you’re willing to be involved in that stops at the Ukrainian border, the surprise isn’t ‘oh, all this stuff isn’t getting to where it needs to go’ – the surprise is that people actually expected it to.”

Similar scenarios have played out in the world’s warzones before, with devastating consequences. “We saw a lot of weapons come in 2003 with the US-led invasion of Iraq,” Rovera told CBS, “and then 2014 happened when ISIS took over large parts of the country and took over large stocks of weapons that had been meant for Iraqi forces.”

Similarly, US forces invading Afghanistan in 2001 faced fighters whose predecessors had been armed by the US in the 1980s. When the US finally withdrew from Afghanistan in 2021, the Taliban was left to claim billions of dollars worth of military equipment left behind. This gear had been intended for the Afghan military, although reports from more than a decade ago suggested that weapons, vehicles, and aid regularly disappeared in Afghanistan before ever reaching their end users.

In Syria, US weapons intended for use by so-called ‘moderate rebels’ ended up in the hands of ISIS and Al-Nusra jihadists, while arms sold to Saudi Arabia ended up seized by Houthi rebels in Yemen.

Mikhail Podoliak, an adviser to Ukrainian President Vladimir Zelensky, said on Sunday that there is “no proof” that weapons entering his country are unaccounted for. “Russia seeks to discredit Ukraine in the eyes of Western societies with allegations about ‘black market of weapons,’” he added, in an apparent effort to accuse CBS and others of doing Moscow’s bidding.