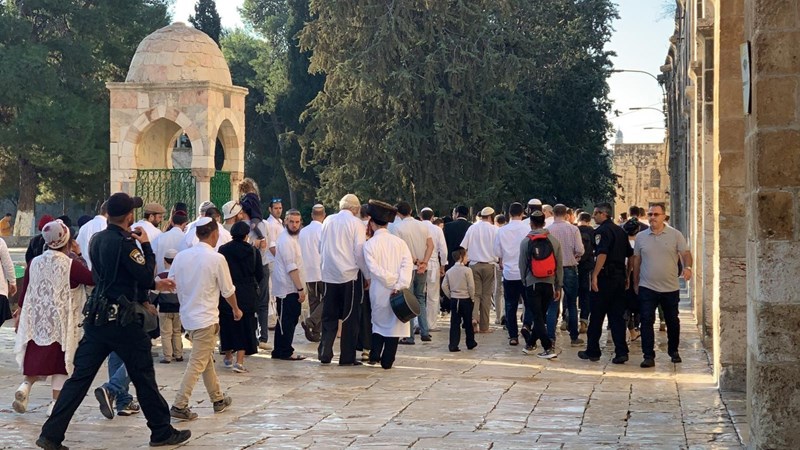 Freedom of the Press is not so free when the Israeli occupation forces are involved.

Al Mayadeen correspondent in occupied Al-Quds reported Sunday that the network’s crew was assualted by the Israeli occupation police while covering the settlers’ incursions into Al-Aqsa Mosque and their provocations inside the Old City.

Our correspondent indicated that the Israeli occupation assaulted and arrested Al Mayadeen cameraman, Mohammad Asho, in an attempt to prevent him from performing his job, after settlers attacked him as well.

Videos showed Israeli occupation police and settlers assaulting Al Mayadeen cameraman and dragging him on the ground for the mere reason of performing his job.

In the same context, Israeli occupation forces arrested some journalists and photographers and rampaged through their equipment.

Israeli campaign of arrests in Al-Quds

The IOF launched a campaign of arrests against Palestinians inside the blessed Al-Aqsa Mosque after they confronted the settlers trying to storm the Mosque.

Our correspondent added that the occupation also arrested four Palestinians in front of Bab Al-Silsila.

Earlier, Al Mayadeen correspondent reported that settlers began storming the blessed Al-Aqsa Mosque in memory of the so-called “destruction of the Temple,” under heavy guard and protection of the Israeli occupation police.

The settlers performed rituals in front of Bab Al-Qattanin, one of the gates to Al-Aqsa Mosque in the occupied city of Al-Quds.

Hamas spokesperson for the city of Al-Quds, Mohammad Hamadeh, warned against settlers storming Al-Aqsa Mosque, threatening that there will be consequences.

Hamadeh added, “Allowing the settlers to storm Al-Aqsa will be confronted by our people who are ready to confront the arrogance of the occupation and its settlers.”

The colonial expansionist so-called “Temple Mount Movement” called for organizing large-scale incursions into the blessed Al-Aqsa Mosque in memory of the so-called “destruction of the Temple,” on August 7.

In this context, Israeli Prime Minister Yair Lapid decided yesterday to allow settlers to storm the courtyards of the blessed Al-Aqsa Mosque, in response to the demand of the extremist groups.

The Palestinian Resistance factions warned against these calls and called on the Palestinian people, and the Arab and Islamic nations to thwart these plans.

The Israeli occupation forces on Saturday evening suppressed a sit-in protest organized by people in occupied Al-Quds in the vicinities of Damascus Gate, denouncing the Israeli aggression on Gaza.

The Israeli occupation forces were deployed in large numbers in the Damascus Gate area, attacking protesters and physically assaulting them, in addition to arresting many young people.

On Friday, the Israeli occupation began an aggression against the Gaza Strip, targeting Al-Quds Brigades Commander Taiseer Al-Jaabari, a military commander in the Strip.

Al-Quds Brigades launched an operation in response to the Israeli occupation’s aggression on Gaza by launching salvoes of rockets toward the occupied Palestinian territories.