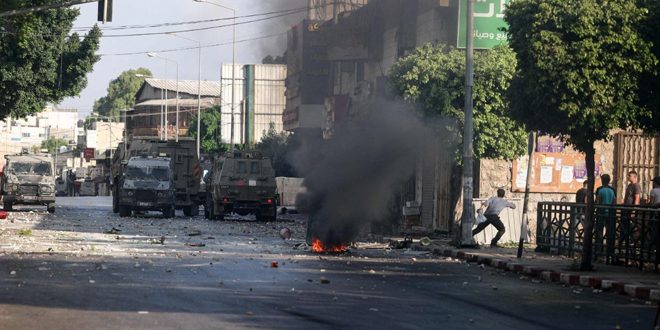 30 Palestinians were wounded by Israeli forces fire as they stormed of the city of Nablus in the West Bank.

Palestinian Wafa Agency said that large forces of the occupation army stormed the eastern alley of the old city in Nablus and encircled the buildings and opened fire at the Palestinians, injuring 30 of them, some of them seriously, and they also prevented emergency crews from reaching the injured.

The occupation forces also encircled a house in the Old City and targeted it with a missile and imposed a tight cordon on the town’s alleys and closed all its entrances.

The occupation forces also stormed the village of Burqa, east of the city of Ramallah in the West Bank, and opened fire and poison gas canisters at the Palestinians, but no injuries were reported.

The Israeli occupation forces attack on a daily basis Palestinian cities and towns, bulldoze lands and uproot trees with the aim of expanding their settlement plans and displacing Palestinians from their lands.

In addition, the occupation forces arrested two Palestinians during their storming of the towns of Ezbet al-Jarad, east of Tulkarm, and Husan, west of Bethlehem.

On Monday, the occupation forces arrested 20 Palestinians in the West Bank.