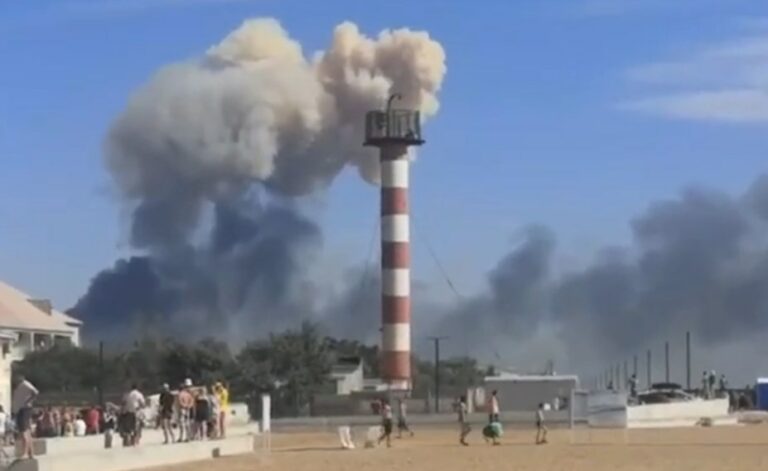 On August 9, explosions rocked Russian military air base “Saki” near the town of Novofiodorovka in the Republic of Crimea.

The Russian Defense Ministry reported that at around 15:20 local time several aviation munitions detonated on a storage site in the area of the airbase. According to the report, the aviation equipment at the airfield was not damaged.

“Measures are being taken to extinguish the fire and find out the causes of the explosion,” the statement said.

The defense ministry added that “there was no fire impact” on the ammunition storage area at the airfield.

Sergey Aksyonov, the head of Crimea, who is now on the site, confirmed that at least one person was killed in the incident. Five more people sustained injuries, including a child.

Security and emergency services are working in the area.

Users in social media have also spotted a commercial drone flying in the area near the airbase. It is likely that the drone was launched by some person from the nearby beach, which is popular among locals and tourists.

It is interesting to note that earlier on August 9, US state-funded media “Radio Liberty” published satellite images of this very airbase:

Currently, the main version of the incident is an accidental detonation of ammunition at the airfield. Nonetheless, the investigation will likely consider a possibility of sabotage.

At the same time, Ukrainian propaganda outlets already started speculating that explosions on the airfield were caused by a ‘precise strike’ with US-supplied missiles. Regardless the reality of these claims, they once again demonstrate the posture of the current Ukrainian regime, which is determined to continue the conflict and reject any possible diplomatic solution of it. In these conditions, the resumption of the active military actions of the Russian Armed Forces in the eastern and southern sectors of operations in Ukraine is just the matter of time.