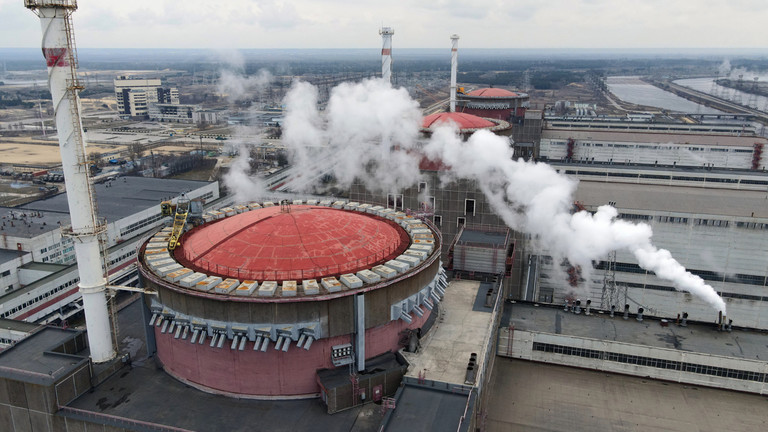 Ten shells launched by the Ukrainian army landed near the Zaporozhye nuclear power plant on Thursday, according to regional authorities. The facility is located in southeastern Ukraine but is currently under the control of Russian troops.

Vladimir Rogov, a member of the Zaporozhye Region military-civil administration, explained that five explosives landed near the commandant’s office at the plant, next to a welding site and a radioactive substance storage facility, causing grass in the area to catch fire.

Another five shells landed near the fire station beside the power plant, preventing a shift change.

Rogov said this was the second time the power plant had come under fire on Thursday and suggested that the strikes were being carried out by Ukrainian forces using multiple launch rocket systems and heavy artillery positioned in Dnepropetrovsk Region.

The military-civil administration of Energodar, the city closest to the power plant, said none of the strikes had led to fires at the reactors and no casualties had been reported.

The Zaporozhye nuclear power plant, which is considered to be the largest of its kind in Europe, was seized by Russian forces in late February, when Moscow launched its military campaign in the neighboring country. The facility continues to operate with Ukrainian staff under Russian control.

Last week, Ukrainian forces carried out a series of strikes on the plant, according to regional authorities, leading to a short circuit at the facility and starting a fire that was eventually put out.

Moscow has condemned Kiev’s attacks as “nuclear terrorism” and has accused it of holding the entirety of Europe hostage by conducting such “suicidal attacks.”

The Ukrainian side has repeatedly denied targeting the plant, and President Vladimir Zelensky has in turn accused Russia of shelling the facility.

Ukraine and the US have also accused Russian forces of using the plant as cover, a claim that Moscow has rejected.