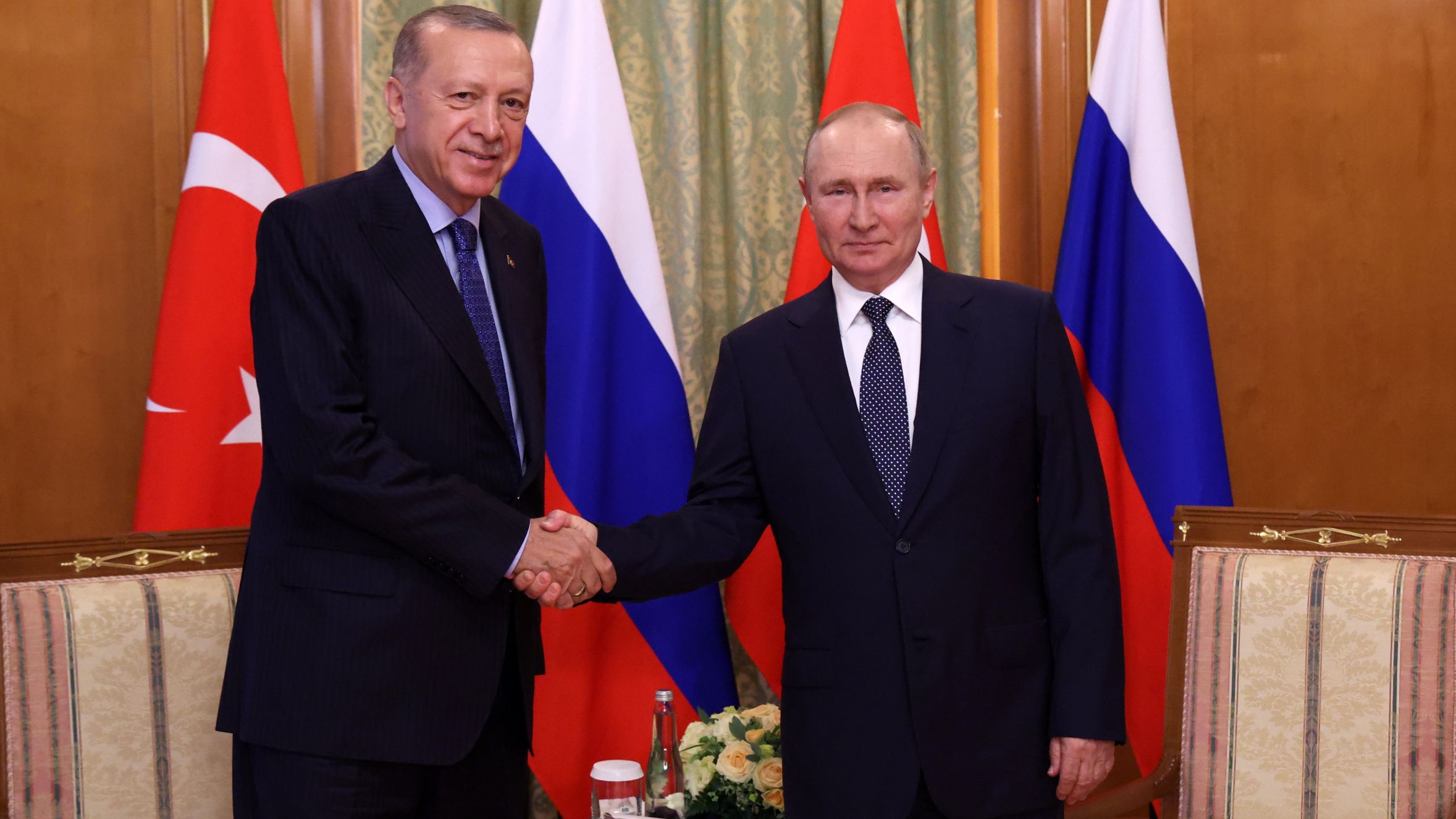 Russian President Vladmir Putin and Turkish President Recep Erdogan held a four-hour meeting on August 5 in Sochi which may change the course of the Middle East, and end the US occupation of Syria.

Putin asked Erdogan to work with Syrian President Bashar al-Assad to resolve the Syrian crisis.  Erdogan assured Putin that the Turkish intelligence service is already coordinating with Syrian intelligence. Erdogan explained on the flight back to Turkey, “As long as the two intelligence services are working on the matter, we need Russia’s support, and there are agreements and understandings between the two countries in this regard.”

On August 9, Turkish state media reported that Putin had suggested a phone call between Erdogan and Assad.

On July 27, Turkish Foreign Minister Mevlut Cavusoglu, said Ankara is prepared to work alongside Damascus against the PKK and was willing to give “all kinds of political support for the work of the Syrians in this regard.”

“We have to somehow bring opposition and the regime in Syria together to reach an agreement. Otherwise, there will be no lasting peace,” he added.

“The Turkish regime, which occupies many cities, towns, and villages in northern Syria, has previously repudiated all its obligations under the understandings reached with the Russian side, which call in particular to respect Syria’s sovereignty, independence and territorial integrity,” al Watan newspaper in Syria reported.

On October 11, 2021 Cavusoglu met with the Syrian Foreign Minister, Faisal Mekdad, during the meeting of the Non-Aligned Movement meeting in the Serbian capital Belgrade.

Assad has been steadily gaining regional acceptance among Syria’s neighbors and some of the Arab Gulf.  The next step is expected re-admission into the Arab League. The leader in Damascus is in a stable political position, but Erdogan is standing on shaky ground.  He faces a presidential election in June 2023, less than a year away.  His economy is almost collapsed, the currency devalued, people are hungry and suffering, and the Turkish people are tired of putting up with 3 million Syrian refugees who do not share their language, or their culture.  Erdogan needs to make peace with Assad in order to win in 2023, which will depend on a boost in imports of products to Syria and sending the Syrians back home.

Before the US-NATO attack on Syria for the purpose of ‘regime change’, Erdogan and Assad, including their families, had enjoyed a warm friendship. Erdogan publicly called Assad “my brother” when addressing him.

President Barak Obama planned and executed a US-led attack on Syria using Radical Islamic terrorists as foot soldiers, and with the Syrian political opposition housed in Istanbul and comprised of almost exclusively followers of the Muslim Brotherhood. Trump finally shut down the CIA project supporting the terrorists in Turkey in 2017. The US-NATO war on Syria had failed.

In 2004, the Ministers of Foreign Affairs of the Republic of Turkey and the Syrian Arab Republic entered into a free trade agreement which stated, “…the will of their peoples who are bound together with exceptional ties of common history, culture and geography.”  This was economic integration of Turkey and Syria, and included not only products, but visa-free travel between the two countries as well.

However, in December 2011, Syria decided to suspend the free trade agreement and impose a tariff of 30 percent on all Turkish imports and prohibitive duties on fuel and freight. Previously, Ankara had announced economic sanctions against the Syrian government.  Later, as the Turkish involvement in the US-NATO war on Syria grew deeper, the Syrian government banned all Turkish products entering Syria, and a closure to all borders.

Turkish Economy Minister Zafer Caglayan said in December 2011, “This year, the amount Turkey will have lost in terms of (decreased) exports to Syria is equal to the total amount of exports to the world for a single day. In other words, it is a figure that can be ignored.”

Erdogan chose to abandon his business community in favor of the US plan to overthrow his “brother” in Damascus.  It is no wonder that Turkey’s economy is near collapse.  He chose a Muslim Brotherhood project over his economy, and the livelihoods of the Turkish people.  He threw out Turkey’s single biggest market in favor of following the orders of Washington, DC. who have repeatedly turned their back on Turkish interests, supported the Kurdish terrorists, and were directly involved in a coup attempt against Erdogan.

The US supported the Syrian Democratic Forces (SDF) in north east Syria, who are a para-military group opposed to Turkey and the Syrian government.  The SDF is directly linked with the PKK, a terrorist group who have killed thousands in Turkey over decades.  The US used the SDF and YPG to fight ISIS, but that war is long over.  The Kurds were never promised a homeland by Washington, DC. and in fact James Jeffrey, the US envoy to Syria, repeatedly advised the SDF to go to Damascus and make a deal.

Now, after Erdogan has threatened to invade further into Syria, the SDF are on the road to Damascus.  Putin has advised Erdogan to cooperate with Assad to stop the separatist ambitions of the SDF and YPG.

Once the SDF are integrated into the Syrian National Army, they will cease to be a threat to the security of Turkey.  This will also signal the time for the US to withdraw from their illegal occupation of Syria, as well as the occupation by Turkish troops.

If Ankara and Damascus resume their relationship it will call an end to the Al Qaeda occupation of Idlib.  The terrorist group Hayat Tahrir al-Sham (HTS), formerly the Al Qaeda branch in Syria, will have lost their Turkish support.  The three million civilians living under the Islamic State of Idlib will be free at last.  Protests in Idlib began once the reports of a possible re-set between Erdogan and Assad.  Turkish flags were burned, and the HTS clerics preached that Turkey is a “Kaffir nation” because they are not an Islamic Republic, even though Turkey has supported them with food, cash, and weapons since 2011.  Terrorists have short memories and are short on loyalties.