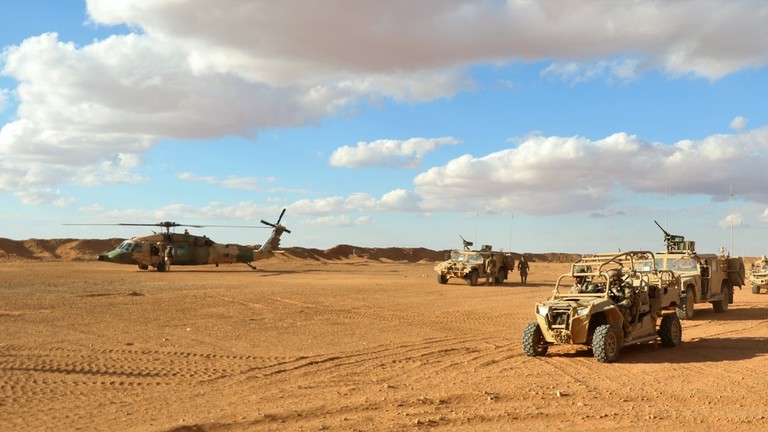 FILE PHOTO: Troops with the US 5th Special Forces Group seen at a landing zone at al-Tanf Garrison in southern Syria, November 22, 2017 © Wikipedia

The al-Tanf facility in Syria has been targeted before

The al-Tanf military base in southern Syria was hit by numerous armed drones on Monday morning, with the US military reporting no casualties. The base, used by American and allied forces, as well as Syrian anti-government militants, has been attacked before, with Washington blaming Iran for the assaults.

According to Operation Inherent Resolve, the US-led mission in Syria, the base was hit by “an attack by multiple unmanned aerial systems” shortly after dawn on Monday. Coalition forces prevented one of the drones from impacting, while a second detonated within the part of the base operated by US-sponsored Syrian militants.

The detonation resulted in “zero casualties or reported damage,” the US said, while other attempted strikes “were not successful.”

Al-Tanf is situated just 24 kilometers (15 miles) from Syria’s border with Iraq, in a stretch of the Syrian desert controlled by militias opposing President Bashar Assad. The region has been occupied by American and allied forces since 2016 and still hosts a small contingent of US troops and a larger group of Syrian militants.

Damascus considers the US presence at al-Tanf illegal, and together with Russia has called for the full withdrawal of American forces there.

The attack on the base came hours after Syrian state media reported that Israeli planes had launched a series of airstrikes on targets near the capital, Damascus, and the coastal city of Tartus, home to a Russian naval base. Israel did not comment on the strikes, while the SANA news agency said that three soldiers were killed and another three wounded.

It is unclear who carried out the attack on al-Tanf, or whether the drone assault was intended as revenge for the earlier Israeli strikes. Al-Tanf has, however, been targeted in this manner before.

A British fighter jet shot down a drone near the base last December, two months after a barrage of rockets and drones left the facility severely damaged. The US military blamed Iranian-backed Shia militias for the attack.

The military situation in southern Syria is complex, marked by overlapping alliances and objectives. Both Russia and the US coalition entered the Syrian Civil War in order to defeat the Islamic State (IS, formerly ISIS) terror group. With nearly all of IS’ military and territorial gains since 2014 rolled back, the US remains allied with rebel groups, while Russia joined the fighting at the invitation of the Assad government. Damascus considers the US presence in the country illegal.

Russia struck the al-Tanf garrison in June, hitting a combat outpost used by the US-allied rebels. America was given advance notice of the strike, which Russian officials said was launched following a roadside bomb attack by the militants.