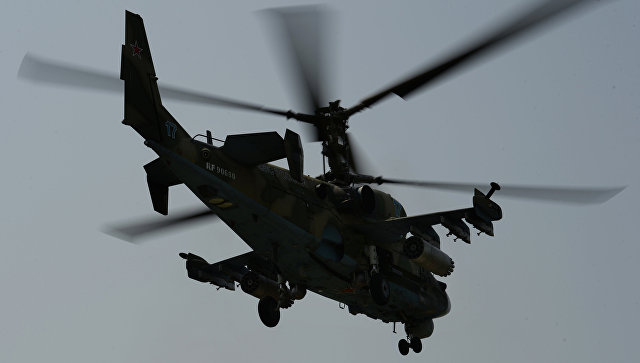 Russian helicopters flew over US bases in northeastern Syria (VIDEOS)

The helicopters flew over two bases of the coalition, the first located in the towns of Himo in the northern al-Hasakah countryside and the second near the town of al-Malikiyah in the northeastern countryside of the governorate.

The Mi-8AMTSh is a lightly-armed assault transport helicopter, while the Ka-52 is a fully-fledged attack helicopter. Both helicopters dropped flares while passing over US bases.

The US-led coalition maintains a network of bases in northeastern Syria, most of which are located at key oil and gas fields. Hundreds of American troops are deployed in these bases. Special operations units from the UK and France are also known to be active there.

According to Russian and Syrian news sources, Russian warplanes conduct sorties over US-led coalition bases in northeastern Syria on a regular basis.

The US claims that its troops are present in northeastern Syria to counter ISIS remnants. Nevertheless, the Syrian government says that the American occupation and its local proxy, the Syrian Democratic Forces, are looting the region natural resources.

It’s worth noting that the US-led coalition also maintains a garrison in the southeastern Syrian area of al-Tanf to block the strategic Damascus-Baghdad highway as well as to help Israel spy on government forces and their allies. Russian warplanes have been also counducting sorties over this area for a while now.

Syria and its allies have been growing frustrated with the US illegitimate military presence in the war-torn country. Despite some political pressure and recent attacks, Washington appears to be determined to stay in the country for as long as possible.