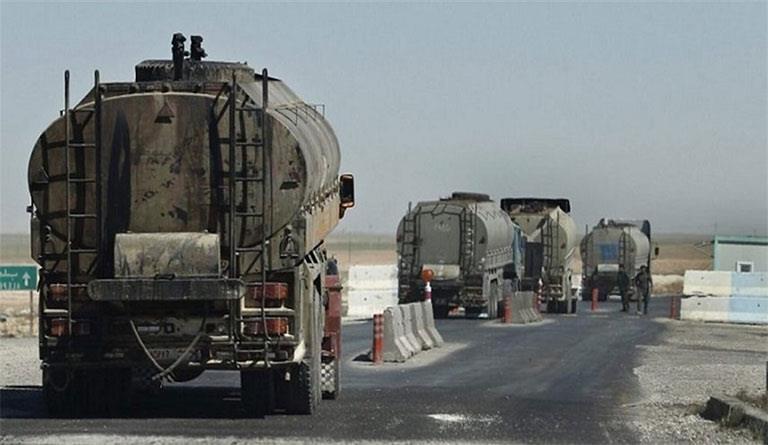 On August 16, 2022, the Syrian Arab News Agency reported that the US occupation forces have stolen 398 tankers full of Syrian oil in one week and transported the stolen oil to US bases in Iraq using an illegal route.

The US forces who invaded in 2014 are in control of the main oil and gas fields in Hasakah and Deir Ez Zor, and they are assisted by the Syrian Democratic Forces (SDF), who were US partners in the fight to eliminate ISIS.  Previously, it was ISIS who stole the oil and sold it to President Erdogan of Turkey, and now the US has taken over from ISIS, while Turkey is not benefitting from the deal, and further aggravated by the US support of the SDF, who are partners with the YPJ, and are aligned with the PKK, a terrorist group who have killed thousands in Turkey over three decades.

The Syrian Oil Ministry said in a statement that the US and its mercenaries are stealing an average of 66,000 barrels of oil per day in Syria, about 80 percent of Syria’s oil production. The prolonged crisis has cost Syria’s oil industry direct and indirect losses of 105 billion US dollars.

Before 2011 petroleum output in Syria

The Free Syrian Army (FSA) was the first large armed group fighting the Syrian Arab Army (SAA); however, the FSA was ineffective even though they were supported by the US. After a few years, it was the Al Qaeda branch in Syria, Jibhat al-Nusra which became the dominant force, and finally, ISIS appeared on the scene. All of these terrorist groups fought in the area where the main oil fields are in Syria, and at times the oil wells passed from one group to another. Today, they are in the possession of the US military.

Before 2011, Syria had full electricity on the national grid, which was supplied by burning oil and natural gas to generate electricity.  The factories in Aleppo were fully supplied with electricity and diesel fuel for production, and Syria also exported some petroleum products.

However, a senior State Department official said to do so is a war crime. The oil in Syria belongs to their government, and according to US law and treaties it has ratified, seizing it would be pillaging, a technical term for theft during wartime that is illegal under the US and international law.

In late 2015, Russian President Putin accused Turkey of being business partners with ISIS while stealing and selling Syrian oil.  Putin said, “IS has big money, hundreds of millions or even billions of dollars, from selling oil. In addition, they are protected by the military of an entire nation. One can understand why they are acting so boldly and blatantly. Why do they kill people in such atrocious ways? Why they commit terrorist acts across the world, including in the heart of Europe.”

Russian Deputy Defense Minister Anatoly Antonov also pointed at Turkey as he was addressing the press in Moscow. “According to the information we’ve received, the senior political leadership of the country — President Erdoğan and his family — are involved in this criminal business. Maybe I’m being too blunt, but one can only entrust control over this thieving business to one’s closest associates. In the West, no one has asked questions about the fact that the Turkish president’s son heads one of the biggest energy companies, or that his son-in-law has been appointed energy minister. What a marvelous family business!”

In January 2013, the FSA were admitting they were corrupt.

“There has been a lot of corruption in the Free Syrian Army’s battalions – stealing, oppressing the people – because there are parasites that have entered the Free Syrian Army,” said Abu Ahmed, an engineer who headed a 35-man unit of the Tawheed Brigade in Aleppo province.

“The Free Syrian Army has lost its popular support,” said Abu Ahmed, while putting support for President Assad at 70 percent among an urban Aleppo population that includes many ethnic Kurds and Christians. He admitted that the looting of homes and resources had caused hatred among the community.  People had no electricity, but the FSA was profiting from selling the stolen oil to Turkey.

Once the FSA faded away, ISIS took control of the oil fields, and trucked the oil in tankers to Turkey, to be refined there and used domestically, or transported to tankers at the ports of Ceyhan or Dortyol for export to European markets that were well aware they were buying stolen Syrian oil from ISIS, but they were getting a low price.

In September 2014, US intelligence officials revealed that the Islamic State group was making millions every day from the illicit oil trade.  ISIS took control of the oil assets from the previous terrorist groups of the FSA and the Al Qaeda affiliate in Syria, Jibhat al-Nusra.  Today, the US military is occupying the oil fields.

In 1998, Richard N. Haass wrote about the US use of sanctions against countries as a tool of foreign policy.  He found that sanctions are unlikely to achieve desired results if the aims are large.  In the case of Syria, the US aim is to overthrow the government which has been in place for 22 years and institute a US-friendly Muslim Brotherhood leader, in the only secular state in the Middle East.  Is that large enough?

Haass said that sanctions can boost an authoritarian administration, trigger large-scale emigration, and hurt the middle class and civil society. In Syria, the government has withstood an armed revolution supported by the US and NATO, withstood a massive migration in the summer of 2015 which saw Syrians walking through Europe, and due to the economic collapse the middle class is now the newly poor.

Humanitarian exceptions are supposed to guarantee that medicines and medical supplies are allowed into Syria, but according to the former director of the WHO in Damascus, Elizabeth Hoff, the hospitals in Syria were not able to order replacement parts for medical machines from western manufacturers due to their fear of facing US sanctions.

Iranian oil tankers to Syria were hijacked by the US

In the darkest days of deprivation for the Syrian residents, they followed news reports of the US high-jacking of the Iranian ship bringing much-needed petroleum products to Syria to be used for electricity, diesel fuel for trucks, and gasoline for cars.

The US needs to leave Syria, lift the sanctions and allow the Syrian people to rebuild their homes and businesses. Humanitarian organizations say most Syrians live under the poverty line, but they fail to mention the US-EU sanctions which caused this poverty.

Life in Syria today is difficult.  Most homes have only a few hours of electricity per day, and cooking gas is expensive and in short, supply, as is gasoline.  Soon students will be back in school and electricity needs increase with studying in the evenings, washing school clothes, and preparing healthy meals for building young minds.  With gasoline in such short supply and highly expensive, kids will be walking long distances to school this winter. Home heating is a distant memory, and wearing sweaters and ski caps indoors is the only way to stay warm.  The US-EU sanctions have caused immense hardship to the Syrian people who have fought against terrorism, chaos, and upheaval.