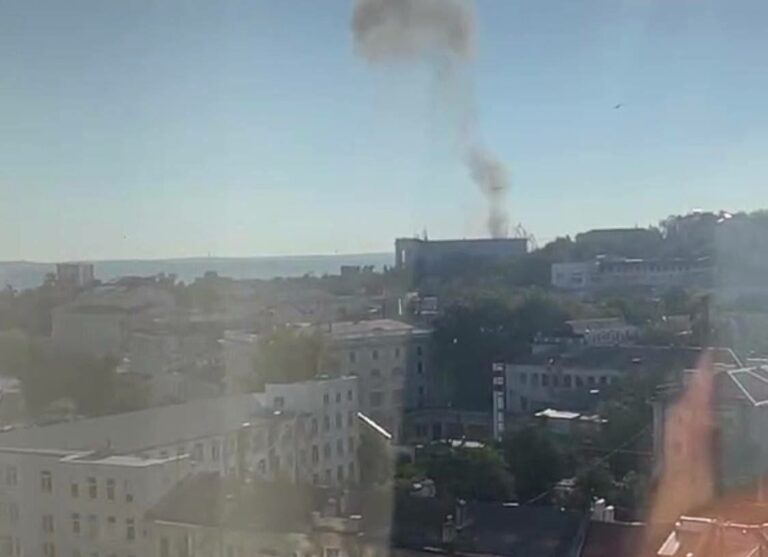 Drone rain over Crimea: Ukrainian UAVs fail to reach their targets in peninsula

On August 20, a UAV hit the roof of the headquarters of the Black Sea Fleet in the city of Sevastopol. It is the second drone attack on the facility.

The city governor assured that there were no victims and no serious damage to the building. Ukraine was blamed for the attack.

Russian forces attempted to intercept the drone with small arms. According to the governor, the UAV was hit right above the fleet headquarters. As a result, it fell on the roof and caught fire.

The police blocked the approaches and entrances to the fleet headquarters. The governor advised residents to stay at home for the next hour.

Judging by the video, Ukrainian forces used a Ukrainian PD-1 UAV, which is produced by Ukr Spec Systems. The flight range is up to 450 km.

After the explosion in Sevastopol, a military helicopter was seen in the sky, patrolling over the city.

The facility was already targeted by another UAV attack on July 31. According to the Russian military, a homemade drone with a low-power explosive device was used to hit the entrance to the headquarters. After the incident, a high level of terrorist threat was introduced in Sevastopol. It was extended until August 29.

The Russian military is yet to ensure the security of the headquarters of the Balck Sea Fleet. The drones can be launched by the Ukrainian military from the Black Sea as well as by sabotage groups from the territory of Crimea.

Ukrainian forces have recently increased their attempts to hit facilities in different regions of Crimea.

On the morning of August 20, explosions were reported at the military airfield near the city of Bakhchisaray. Any detail are yet to be revealed. The local officials are yet to comment on the incident. – FAKE

The reports about the explosions in Bakhchisaray turned out to be fake. Ukrainian media spread old photos supporting the reports.

The air defence means intercepted a drone over the city of Bakhchisaray:

At the same time, Russian air defence systems intercepted another UAV over the village of Molochnoe in the Saky region.

On the evening of August 19, air defense systems intercepted several targets over Sevastopol, Yevpatoria (located near Saky) and Kerch.

The drone attacks began on August 18, when several UAVs were intercepted over Kerch and Sevastopol. LINK

The Ukrainian Defense Ministry previously warned that the Armed Forces of Ukraine could strike Crimea by the American HIMARS multiple rocket launcher system, since the United States does not consider the peninsula to be part of Russia. At the same time, the Crimean bridge is “the number one goal,” for the Ukrainian military. The Ukrainian president said that Ukraine would strike at the Crimean Bridge as soon as it receives the necessary military equipment from the Kiev’s allies.

The attacks on Crimea began only after Washington reportedly allowed Ukrainian troops to strike the peninsula. This clearly demonstrates who commands the Ukrainian military.

So far, the Ukrainian military have used only UAVs for attempts to attack targets in Crimea. Most of them are intercepted. Since the cost of the attempts is too high, Ukrainian forces use small drones with explosive devices. They cannot cause any significant damage to Russian military facilities in the peninsula. The attacks are likely aimed at creating the necessary informational gains on the eve of the Independence Day of Ukraine which is celebrated on August 24.

All the mistakes of the Russian military and any successful strikes or sabotages in Crimea are great victories for the Kiev regime as they demonstrate that the Ukrainian military can reach the targets in the peninsula. Despite the fact that they lose most of them in vain. In turn, Russian forces are yet to increase their attacks on the decision-making centers in Ukraine. Russia’s response is yet to come.