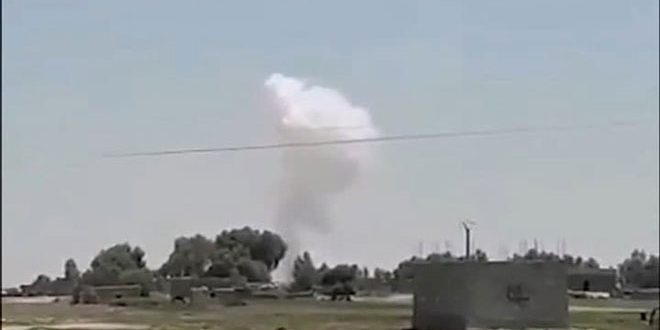 Local sources in Deir Ezzor told SANA reporter that a base for the US occupation at the Koniko oilfield in the eastern countryside was targeted with bursts of rocket shells, and later explosions were heard inside the base, and no causalities were reported among the ranks of the occupation forces.

The sources added that the US occupation forces closed the area immediately, while the occupation’s planes were hovering in the airspace of the area.

Meanwhile, the American NBC News reported that a number of US occupation soldiers were injured in a missile attack which targeted their military bases east of Deir Ezzor province.

On Wednesday, two military bases of the US occupation at al-Omar and Koniko oilfields were subjected to a missile attack.

The US occupation forces have set up bases in several areas in the Syrian al- Jazeera region, particularly in the oil and gas fields, to loot their production and smuggle it abroad through convoys of tanks and trucks in coordination with their mercenaries of SDF militia.