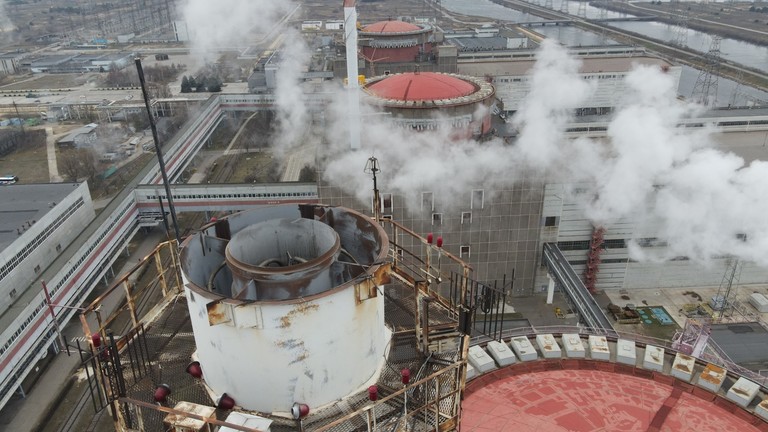 Security systems have been activated at the Zaporozhye nuclear power plant after a power outage, which temporarily left the facility without electricity, members of the Russia-backed administration in the Ukrainian region have claimed.

The plant has since been connected to an alternative source of power, according to officials.
The blackout is said to have been caused by massive wildfires in the area, which were started by Ukrainian shelling, theу said.

Fires, which have engulfed parts of the steppe and woods surrounding the city of Energodar, led to short-circuits in the local grid, leaving not only parts of Zaporozhye region without power, but also the neighboring Kherson region.

The head of the pro-Russian military-civil administration of Energodar, Yevgeny Balitski, has been quoted by media as saying: “according to preliminary information, because of massive shelling by the Ukrainian armed forces, which has continued since last night, fields and undergrowth caught fire. This led to a short-circuit in the grid.”

The Zaporozhye Nuclear Power Plant is the largest facility of its kind in Europe. It was seized by Russian forces in early March, soon after Moscow launched its military offensive against Kiev. Since then, the country’s National Guard and Nuclear, Biological and Chemical Defense Troops have been guarding the site, with Ukrainian staff continuing to operate the plant.

Over the past month, Russia has repeatedly accused Ukrainian forces of shelling the nuclear power plant, damaging some of the equipment and buildings. Moscow has warned that Kiev is risking a nuclear incident on a similar scale as the 1986 Chernobyl disaster or even worse.

Ukraine, in turn, strongly denies its military is targeting the facility, and accuses Russian troops of deliberately shelling the plant to frame pro-Kiev forces. Moreover, Ukrainian officials and some of their Western supporters claim that Russia is using the plant as a military base, hiding its personnel and hardware on its grounds.

Russian officials, for their part, have repeatedly called on the International Atomic Energy Agency (IAEA) to send inspectors to the facility, saying that such a mission would corroborate Moscow’s version of events.