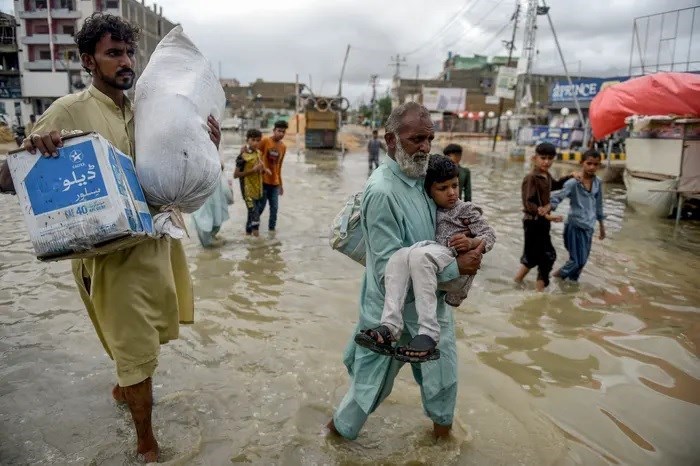 The new death toll came a day after the Pakistani Prime Minister, Shehbaz Sharif, asked for international help in battling deadly flood damage. More than 33 million people have been displaced.

The government has declared an emergency to deal with monsoon flooding, which began in June and continues to wreak havoc in Pakistan.

The National Disaster Management Authority in its latest overnight report said 45 people were killed in flood-related incidents from Friday to Saturday. That brought the death toll since mid-June to 982 with 1,456 injured.

Many parts of Pakistan have subsequently become inaccessible, and rescuers are struggling to evacuate thousands of marooned people from flood-affected areas. The Balochistan and Sindh provinces are the worst affected areas.

Three people were killed as a result of landslides and floods in Swat, Khyber Pakhtunkhwa province, and the authorities in Nowshera asked for immediate evacuations amid a “very high flood” in the Kabul River.

Videos shared on social media showed bridges, roads, and hotels sinking into water and people running to evacuate their homes. The army has been called in for rescue help in the province.

The additional deputy commissioner in Swat said on Friday that roads spread over 130 km had been damaged and 15 bridges were completely destroyed as the flood wreaked havoc and more than 100 houses and at least 50 hotels and restaurants were also destroyed.

In response to Sharif’s appeal for international aid, the UN planned a $160m flash appeal for donations, according to foreign ministry spokesman Asim Iftikhar. He said in his weekly briefing on Friday that the appeal would be launched on 30 August.

Pakistan keen to trade in national currencies with Russia – official.