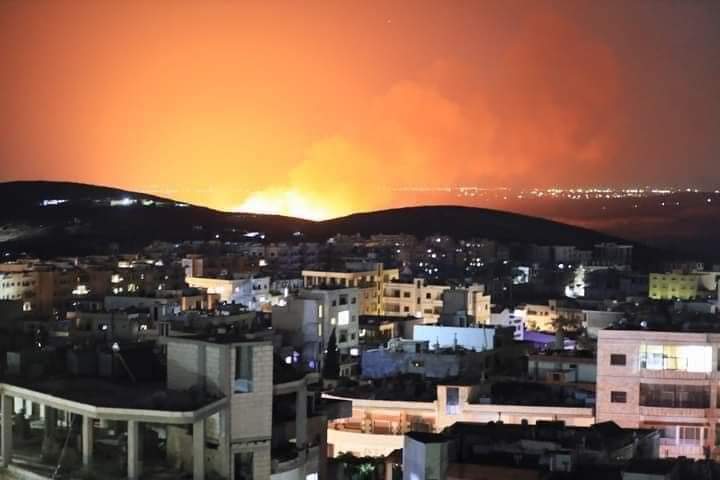 On August 24, the US military in Syria carried out a retaliatory airstrike on a militia that the US claims previously attacked the Al Tanf base on August 15.

US F-15 and F-16 jets dropped guided bombs on nine ammunition and storage bunkers in Ayyash, near Deir al-Zour in the early hours of Wednesday; however, the militia may not have been responsible for the August 15 attack.

The Al Tanf base is an illegal US military base in southeast Syria established in 2016, on the Damascus to Baghdad highway, near the borders of Iraq and Jordan. The US military invaded Syria in 2015 while fighting ISIS. Despite ISIS being defeated in 2019, the US occupation forces have never left Syria.

ISIS did invade Syria and caused a great deal of death and destruction; however, the US and their Kurdish allies were not responsible for the defeat of ISIS.  The Syrian Arab Army (SAA) is the national army in Syria and is comprised of hundreds of thousands of Syrians, as it is a compulsory service for every Syrian male over the age of 18, who is not enrolled in a University.  On the ground as well as the Russian army and air force base in Syria.  A few thousand US troops and their Kurdish militia, the SDF, played a small part in the defeat of ISIS in Syria as compared with the Syrian and Russian armies.

On August 15, the Al Tanf base was attacked by drones, but according to US Central Command, caused no casualties and no damage. The US has stated the recovered drone parts lead them to believe it was an Iranian-backed militia in Syria who carried out the attack.

Iranian Foreign Ministry spokesman, Nasser Kanaani, issued a statement denying Iran had any link to the groups the US has blamed.

Major General John Brennan, the commander of the Combined Joint Task Force, associated with Operation Inherent Resolve, said, “Coalition personnel retains the right to self-defense, and we will take appropriate measures to protect our forces.”

The eastern desert areas in Syria are inhabited by local tribes.  These are hard-living, sturdy people who are not afraid to stand their ground and are well-armed in most cases.  In history, these are peoples who have fought each other and invaders over the millennia.  The tribes have decided they want the US invaders out of the country, primarily as they see the US sanctions on Syria as the foremost obstacle to reconstruction and recovery from the devastation caused by armed conflict beginning in 2011.  The tribes have rejected the US-backed militias, such as the Kurdish SDF, and the terrorists who were following Radical Islam, such as those in occupation of Idlib.  The US-backed Free Syrian Army (FSA) was not supported by the tribes, and after the FSA morphed into Al Qaeda the tribes fought battles to drive the terrorists westward into their current enclave at Idlib.

Syria has a severe electricity shortage, with most households getting about one hour per day.  Syria does not have full electricity because the US military has occupied the oil fields and confiscated the oil, thus preventing its domestic use to generate electricity.  The tribes, and indeed all Syrian residents, desperately want the US military out so they can once again produce electricity, and gasoline for domestic use.  US sanctions prevent importing petroleum products, which led to the US high-jacking Iranian oil tankers coming to Syria previously.

On August 25, Israel targeted the city of Misyaf in the Hama province.  The attack came from Israeli warplanes over the Mediterranean Sea near Tartus, as they fired several missiles at Misyaf.  Syrian air defenses responded and most of the missiles were downed, but one missile caused a fire that threatened to spread into a wildfire but was eventually contained by residents and firefighters. Syrian Arab News Agency reported that two civilians were wounded in the attack.

Israel always coordinates with the US military on airstrikes it conducts in Syria.

The Euphrates river splits the eastern province of Deir Ezzor, with the US and their Kurdish SDF allies on the east side, and the Syrian Arab Army (SAA) and their allies west of the river.

The Al-Omar oilfield is the largest in Syria, and before 2011 Syria was energy self-sufficient.  Syria produced enough domestic oil and natural gas to meet the needs of the nation in electricity production, cooking gas, diesel fuel for heating and transportation, as well as gasoline for cars and transportation.  Before the US-NATO war for regime change, Syria even exported gas and oil.

Once the US military invaded, they set up a base at the Al-Omar oilfield and confiscated the oil produced.  In cooperation with their Kurdish allies, the US looted the oil and transported hundreds of tankers full to the Kurdish region in neighboring Iraq for resale on the black market.  This is the same oil that ISIS used to sell to Turkey for $17 per barrel.

On August 25, Syrian Arab tribes in the northern suburbs of Deir Ez Zor attacked the base housing US military at the Al-Omar and Conoco oil fields, leaving three US servicemen with minor wounds, after the residential area at the base was hit by missiles causing a massive fire.

The tribes temporarily wrested control of the oil field from the US military, their security contractors, and the SDF.  Battles soon ensued at Azbay, in the northern suburbs of Deir Ez Zor, between the Syrian Arab tribes against the US and their SDF allies.  The US called in helicopters and reinforcements to the oil field, and ambulances were seen responding.

The US has 28 military bases in Syria, located at strategic oil and gas wells in the east of Syria.

The US responded by air strikes on an SAA position in al-Mayadeen, a suburb of Deir Ez Zor. This is the fifth attack on the US military base at the Al-Omar oil field this month.

Syria says it will drive the US from Syria if they will not leave voluntarily. Local tribes and residents have been resisting the US occupation by blocking the path of US military vehicles, throwing stones at vehicles, and in some cases attacking bases.

Syrian Foreign Minister Faisal Mekdad, while speaking to the United Nations General Assembly in New York in September 2021, said, “Just as we managed to wipe out terrorists from most of Syria, we will work to end the occupation with the same resolve and determination, using all possible means under international law.”