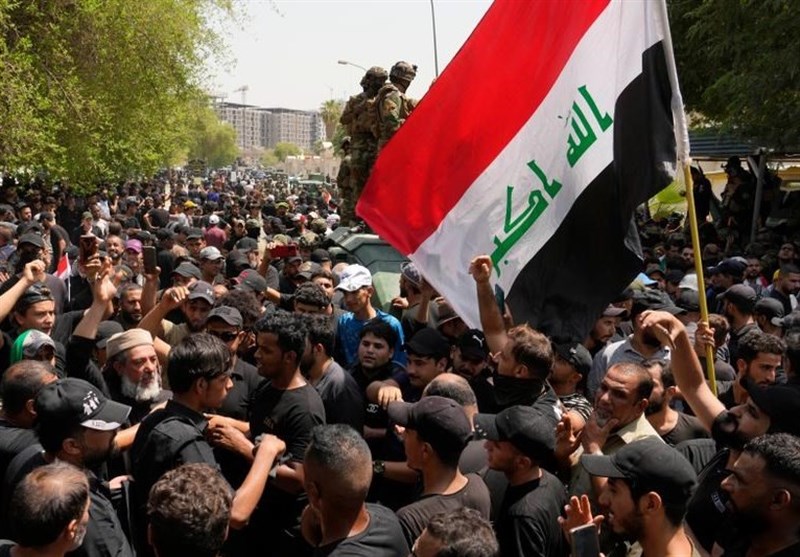 The protesters and sit-in participants in Baghdad’s Green Zone were given 60 minutes to leave the Green Zone of Baghdad by the Influential Iraqi cleric and the leader of the Sadr movement Muqtada al-Sadr.

Sadr called on his loyalists in the government zone to withdraw after nearly 24 hours of fierce clashes with security forces and Popular Mobilization Units (PMU).

In a televised speech Tuesday, Sadr gave his supporters, hundreds of whom stormed the government palace and have been holding an ongoing sit-in outside the parliament building, an hour to leave.

The death toll rose to at least 30 people after two days of unrest, officials said.

Iraq’s military announced a nationwide curfew, and the caretaker premier suspended Cabinet sessions in response to the violence.

After Sadr announced Monday he would resign from politics, his supporters stormed the Green Zone, which is home to Iraqi government offices and foreign embassies. At least one country evacuated its embassy amid the chaos.

Iraq’s government has been deadlocked since Sadr’s party won the largest share of seats in October parliamentary elections but not enough to secure a majority government — unleashing months of infighting between different factions.

Sadr had demanded dissolution of parliament and early elections. He had also called on his supporters to continue the sit-in inside the parliament until his demands were met.

In June, all 73 legislators of the bloc quit their seats in a move seen as an attempt to pressure political rivals into fast-tracking the formation of a government.

According to Iraqi laws, if any seat in parliament becomes vacant, the candidate who obtains the second-highest number of votes in their electoral district replaces them.

This means that many of the seats vacated by Sadrists will therefore be filled by member parties of the Coordination Framework Alliance, such as former prime minister Nouri al-Maliki’s State of Law and the Fatah Alliance, which is the political wing of the Popular Mobilization Units, better known as Hashd al-Sha’bi.
Source : Tasnim