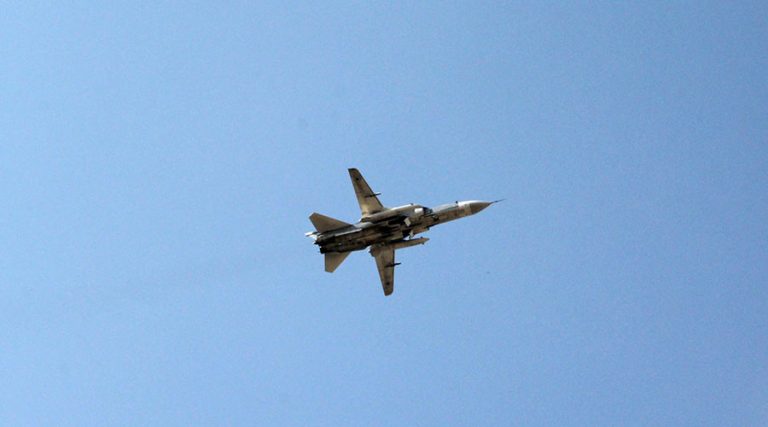 A Russian Su-24 strike aircraft in the sky over the Khmeimim airbase in Syria. Photo: Dmitriy Vinogradov / RIA Novosti

On August 31, fighter jets of the Russian Aerospace Forces carried out a series of airstrikes on the northwestern Syrian region of Greater Idlib, which is occupied by al-Qaeda-affiliated Hay’at Tahrir al-Sham (HTS) and several other terrorist groups.

The airstrikes hit the outskirts of the town of Sarjah in the southern countryside of Idlib, where HTS maintain a number of positions, as well as the remains of a food preservation plant in the western outskirts of Idlib city, which is being used as a headquarters by the terrorist group.

The London-based Syrian Observatory for Human Rights said that the airstrikes resulted in casualties, without providing further details.

This was the second wave of Russian airstrikes to hit Greater Idlib this month. On August 22, more than 14 airstrikes hit the western outskirts of Idlib city. The airstrikes destroyed a headquarters, a communication center and an ammunition depot of HTS, according to the Russian Ministry of Defense.

The recent Russian airstrikes on Greater Idlib were a response to ceasefire violations by HTS and its allies. The ceasefire was brokered by Russia and Turkey more than two years ago. In a briefing on August 29, the Russian Reconciliation Center in Syria, which is tasked with monitoring the ceasefire in the region, reported three indirect fire attacks by HTS.

Turkey maintains a large force in Greater Idlib. Yet, it has been doing nothing to enforce the ceasefire. Russia is apparently trying to maintain pressure on HTS and its allies to prevent a dangerous military confrontation in the region, which remains unstable.