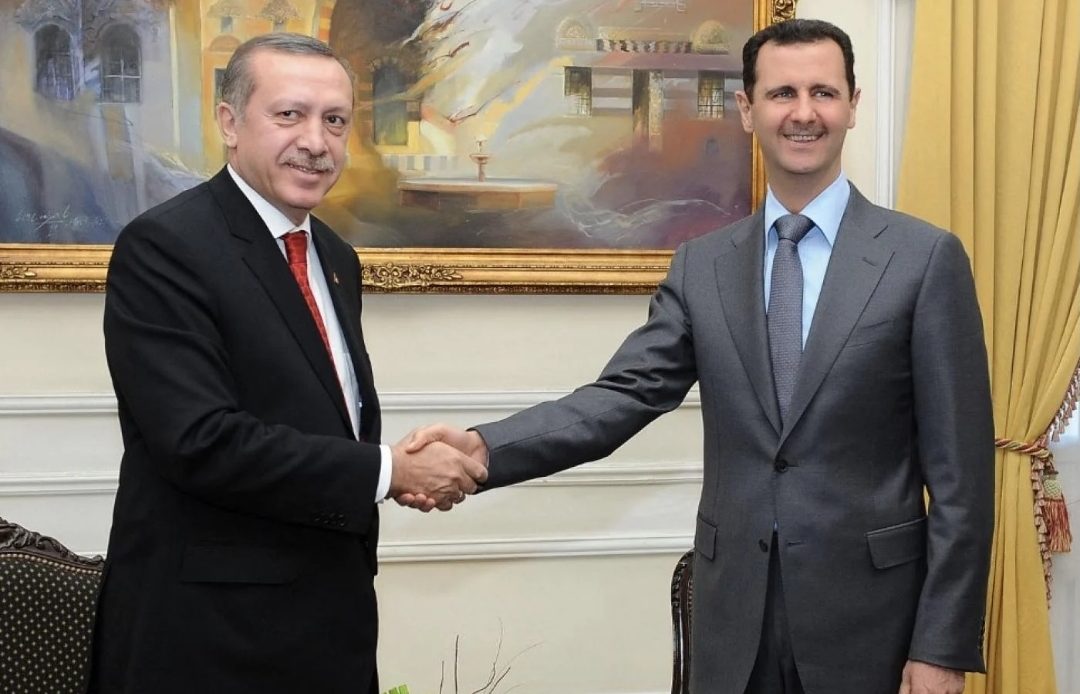 Syria is key to Turkey’s future, economically and politically

Turkish President Recip Tayyip Erdogan told reporters recently, that Ankara needs to “secure further steps with Syria.” He added, “You have to accept that you cannot stop political dialogue and diplomacy between countries. There should always be such dialogue.” Ankara’s goal, he added, was not to defeat Syrian President Bashar Al Assad.

Turkish Foreign Minister Mevlut Cavusoglu disclosed previously that he spoke with his Syrian counterpart, Faisal Mekdad, at a Non-Aligned Movement summit held in Belgrade in October 2021, in the first public high-level meeting between Turkish and Syrian government officials since 2011.  In that meeting, Cavusoglu reportedly told Mekdad that “we need to somehow come to terms with the opposition and the regime in Syria. Otherwise, there will be no lasting peace”.

Over the past year, Turkey has also mended fences with the United Arab Emirates, Saudi Arabia, and Israel. Although Turkey backed the deposed Muslim Brotherhood leader of Egypt, former President Morsi, Turkish officials also appear to be working towards restoring ties with Egypt. This comes after several Arab states have restored relations with Damascus and have begun a process of bringing Assad in from the cold.

Erdogan’s AKP party and his opposition have called for normalization with Damascus to deal with the Syrian refugee issue which is being used as a political tool.

In the last meeting between Russian President Vladimir Putin and Erdogan in Sochi, Putin urged Erdogan to reach out to Assad and restore relations to solve a long list of issues affecting the two neighbors, with security issues being at the top of the list. This would propel the political solution to the Syrian crisis after years of stalemate.

Both Turkey and Syria want to see US troops withdraw from Syria, and neither wants an independent, Kurdish-dominated state in northeast Syria.

The US is dead-set against restoring relations with Damascus and has advised Ankara to not move forward in a peace effort.  Washington’s policy on Syria is to keep the stalemate.

In June 2023 Erdogan will face a re-election vote, and his poll numbers are dismal, while the Syrian refugee issue is one of the top concerns for Turkish voters, regardless of their party. Erdogan’s ruling party, AKP (Islamist Justice and Development), is under threat from other parties, as Erdogan is losing support even among his base.

Turks are unemployed, inflation is at 80%, the currency is devalued, and they see the 3.7 million Syrian refugees as the cause of their suffering.  Erdogan is being blamed for the economic mismanagement of the country and the opposition parties promise economic reforms. Syrian refugees are only under ‘temporary protection status in Turkey.  Erdogan’s pledge to return the millions of refugees to Syria was designed to gain support and votes and matches the promises made by his opposition.

There are now calls to exclude Syrians who have received Turkish citizenship from voting.  Even if that were to be approved, it won’t help the Syrians in Turkey, because virtually every party has promised to send them home, such as Ümit Özdağ, founder of the far-right Zafer (Victory) Party.  Seeing the writing on the wall, social media videos show thousands of Syrians in Turkey are now migrating to Europe in scenes reminiscent of summer 2015.

The US-NATO attack on Syria for regime change

In March 2011 US President Obama and NATO began a regime change project directed at Syria.  Turkey was a US ally, and member of NATO, and was tasked with a huge role in the war.  The tents were up on the border in Turkey even before the first refugee walked in.  By May 2011, Syrian opposition activists convened in Istanbul and set up their headquarters to support the destruction of Syria.  The opposition was made up almost entirely of Muslim Brotherhood members who had not lived in Syria in decades and received the full support of Erdogan.

The National Coalition of Syrian Revolution and Opposition Forces commonly named the Syrian National Coalition (SNC) has reacted to the Turkish overtures of reconciliation by claiming they are just rumors, but sources have reported they are in a panic to lose their funding and status.

The Free Syrian Army began in July 2011 with the CIA and the Turkish National Intelligence Organization (MIT) funding, training, and arming fighters who sought to establish an Islamic State in Syria, while following the Muslim Brotherhood ideology of Radical Islam.  In 2017, President Trump cut off the CIA program to support the terrorists, who the western media had at first dubbed “freedom fighters”, which prompted Erdogan to establish the Syrian National Army, which are Radical Islamic terrorists left over from the CIA program. According to a 2019 poll, 47.5% of Turks see the Free Syrian Army as an “enemy”.

The Syrian refugees in Turkey

Syrians are stereotyped in Turkish media as either backward religious extremists, or as cowards for not fighting to defend their country from terrorism and invasion.

Syrians who have obtained Turkish citizenship still face discrimination in the workforce and social life.  The official policy was never to integrate them into society, but to go home as soon as possible.

Racist attacks and hate speech have been on the rise as the economic situation worsens.  In 2020, 17-year-old market worker Hamza Ajan was beaten to death, in 2022, 22-year-old Sherif Khaled al-Ahmed was killed by six young Turkish men in Istanbul, also in 2022 in Istanbul Sultan Abdul Baset Jabneh was killed.  In 2022 in Gaziantep, 70-year-old Leila Muhammad was videoed being kicked in the face and insulted by a Turkish man in the street.  The video was seen online by millions and portrayed the unwelcome existence in Turkey. The UN refugee agency said that an estimated 800 refugees are returning to Syria each week from Turkey.

The last remaining terrorist-controlled area in Syria is the province of Idlib in the northwest.  Hayat Tahir al-Sham (HTS) is holding about 3 million persons as human hostages, while the Turkish military protects them from attack by either the Syrian or Russian military.

HTS was formed named Jibhat al-Nusra, which was the Al Qaeda branch in Syria. The HTS routinely aligns with Al Qaeda and the Islamic State (IS).  Almost every IS leader killed by the US in airstrikes has been in Idlib.

If Turkey renews its relationship with Syria, HTS will disappear, and their foreign fighters from Central Asia and China will have to go home, even after it was fake Turkish passports issued by Erdogan which moved them from their Uyghur homes to Idlib

The US-Kurdish alliance against ISIS

The US military invaded Syria to fight ISIS, and though ISIS are defeated, the US never left. The US partnered with a renegade Kurdish militia, SDF and YPJ, who are affiliated with the international terrorist group PKK, which has killed thousands in Turkey over three decades.

The Turkish invasion to push back the Kurds

In August 2016, Turkey invaded northern Syria.  The objective was to push back and contain, the SDF and YPJ, who they consider to be terrorists and the enemy of Turkey.  The fact that Turkey’s enemy is the partner of the US has strained relations to the boiling point.  Damascus shares a common interest with Ankara in stopping Kurdish separatist ambitions which will return the northeast to the central government and create a security zone along the border.

Syrian Foreign Minister Faisal al-Mekdad has called for Turkey to withdraw its military from Syria, to stop supporting terrorism, stop interfering in Syrian domestic issues, and solve the water issues between them.

Erdogan and Assad are both invited to attend the Shanghai Cooperation Organization in September and there exists the opportunity for a continuation of the Turkish moves toward Syria.

In the past, Erdogan vowed to pray in the Umayyad Mosque in Damascus, and that might happen.