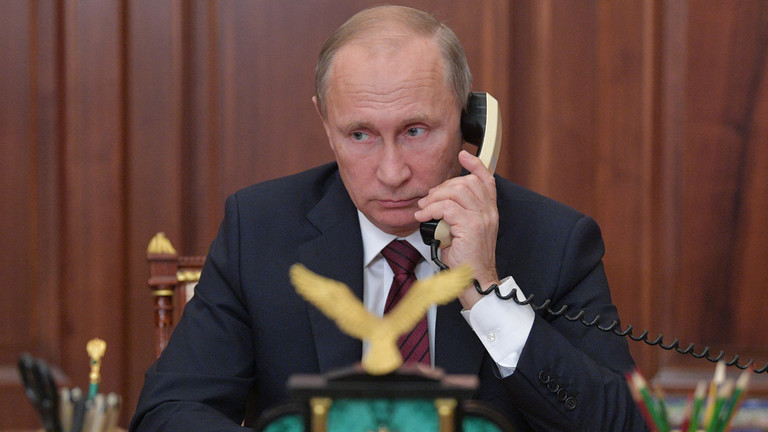 Russian President Vladimir Putin and his French counterpart Emmanuel Macron spoke on the phone on Sunday, trading blame over the precarious situation at the Zaporozhye nuclear power plant in Ukraine.

During the “detailed and frank exchange of views,” Moscow drew attention to Ukraine’s repeated shelling of the plant’s facilities, including its radioactive waste storage, “which is fraught with catastrophic consequences,” the statement from the Kremlin read.

The Russian side also informed Macron of the steps Moscow is taking to protect the facility, while also urging the West to convince Kiev to immediately stop its attacks on the plant.

A separate readout of the call from the Elysee Palace largely pinned the blame for the situation in Zaporozhye on Russia, adding that the “occupation” by Russian troops is putting the facility at risk.

“[Macron] asked that Russian forces withdraw their heavy and light weapons from the [Zaporozhye plant] and that the [International Atomic Energy Agency’s] recommendations be followed to ensure safety at the site,” the statement read. Earlier, Russian Defense Minister Sergey Shoigu claimed that Moscow does not station heavy weaponry at or near the facility.

At the same time, according to the Kremlin, both sides said they were ready to engage in a “non-politicized interaction” to address safety concerns at the facility with the participation of the UN’s International Atomic Energy Agency (IAEA), which inspected the plant earlier this month.

On Sunday, the last working power unit at the Zaporozhye facility, which has been under Russian control since March, was switched off. According to Vladimir Rogov, a member of the regional administration, the decision was made due to continued shelling of the plant by Ukraine. The constantly changing mode in which the reactors and turbines were forced to operate because of the attacks created the risk of an accident, he said.

On Friday, in the wake of the IAEA inspection of the plant, Rafael Grossi, the watchdog’s director, insisted that all attacks on the facility must cease, warning of a looming “nuclear accident.” To stop this from happening, he urged Moscow and Kiev to establish a kind of “sanctuary” at the plant by reaching a “simple protection agreement” that would see the two sides “agree in principle that the plant should not be attacked.”