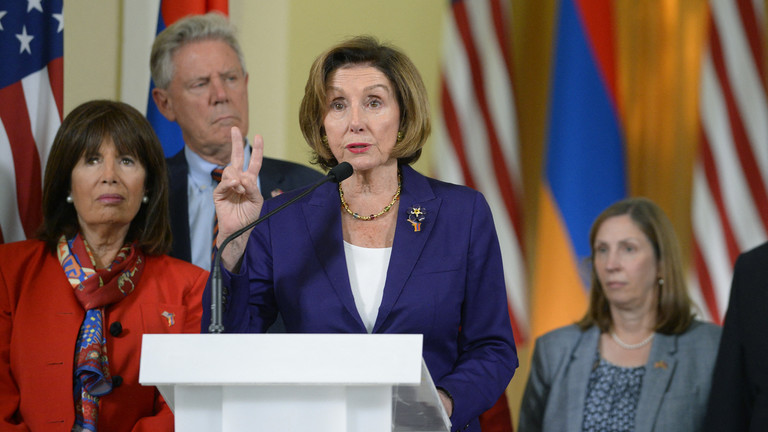 The sovereignty of Armenia is of value to America, the House speaker claims

US House Speaker Nanacy Pelosi blamed Azerbaijan for the current flareup with Armenia and offered security assistance to Yerevan, as she arrived to the Armenian capital on Sunday.

Pelosi said her trip was of prime importance in view of the “illegal and deadly attacks by Azerbaijan on Armenian territory.”

“We strongly condemn those attacks. This was initiated by the Azeris and there has to be recognition of that,” she insisted.

Border clashes erupted between Armenia and Azerbaijan on Tuesday, with both sides accusing each other of initiating the violence. Yerevan has said it lost 135 troops in the fighting, with Baku putting its death toll at 79 soldiers.

The two former Soviet republics remain at odds over the Nagorno-Karabakh region, which has been controlled by ethnic Armenian forces, supported by Yerevan, since the 1990s, but is claimed by Azerbaijan as part of its territory.

The neighboring countries fought a 44-day war over Nagorno-Karabakh in 2020, which ended with a Russia-brokered truce and the ceding of some territories to Baku.

The resolution condemning Azerbaijan’s aggressive action Armenia will be taken up in Congress soon, the third-highest-ranking US official promised.

Also on Sunday, dozens of people staged a rally in Yerevan demanding that Armenia quit the Russia-led Collective Security Treaty Organization (CSTO). The demonstrators chanted slogans, while carrying Armenian and US national flags.

Armenia’s Prime Minister Nikol Pashinyan earlier addressed CSTO for help amid the current crisis, with Baku offering Yerevan a truce shortly after that. The bloc sent a joint mission to Armenia, but refrained from sending military forces, prompting dissatisfaction from Armenian officials.

Pelosi’s previous visit to another global hotspot – Taiwan – provoked a major spike in tensions between the US and China last month.