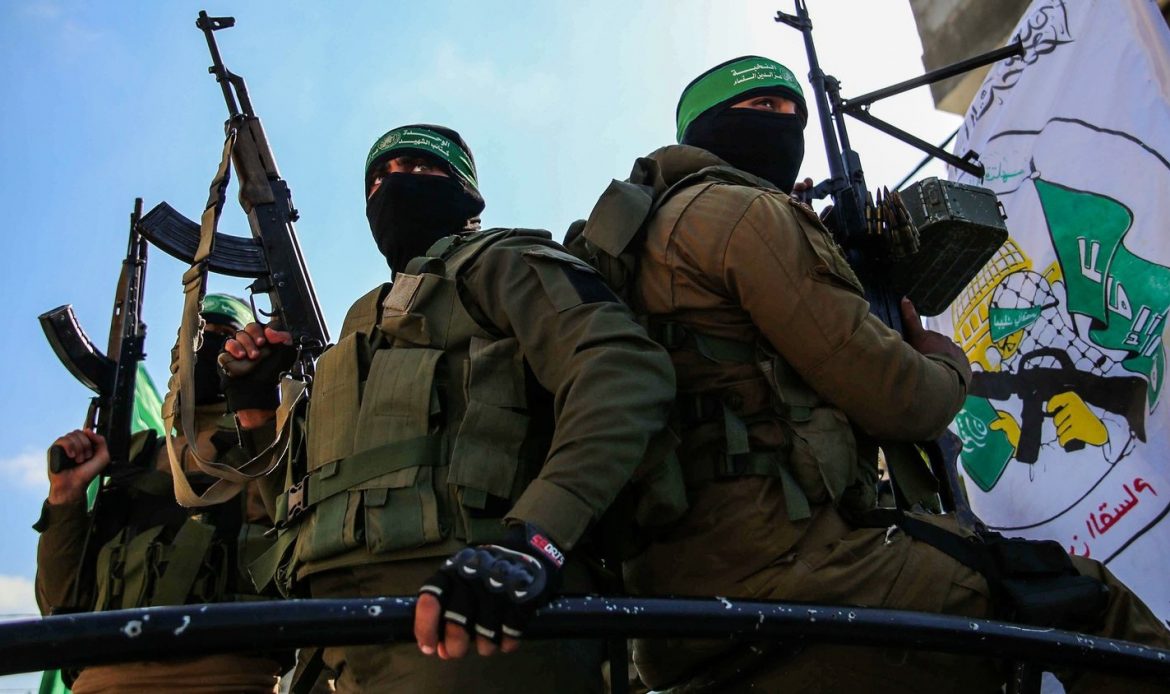 Muhammad Atiwi, a Palestinian who was held for 13 years in an Israeli prison after he was convicted of being a member of Hamas' armed wing, relatives celebrate his release in Gaza, on July 16, 2020.

The West Bank in Palestine is ready to explode

There is a battle brewing in the occupied West Bank of Palestine. Thousands of Israeli occupation forces will be deployed to face a growing resistance force. The ‘natives are restless’ and the Lions’ Den has mobilized to fight for their freedom and human rights.

The Israeli occupation has depended on divisions among the Palestinian factions. However, it has never before faced a unified force of motivated youth who are willing to die for freedom.

500,000 illegal Jewish settlers now live in the West Bank in some 130 settlements. Recently, Israeli forces reported that dozens of settlers ran through Hawara, near Nablus, throwing rocks at Palestinian cars. The settlers used pepper spray on the Israeli commander, as well as another soldier, and sprayed another two soldiers at a nearby checkpoint.  Settlers are allowed to intimidate Palestinians and destroy their property, while Palestinians are hunted down and killed by Israeli occupation forces.

The Palestinian youth have grown up under brutal military occupation and an apartheid state.  The resistance in Jenin, Nablus, and Al-Khalil has inspired rebellion against sieges and attacks, and Palestinians living under the iron hand of oppression are ready to fight the Israeli occupation, and are frustrated with their leadership, which is seen as collaborating with the Israelis in keeping the status quo firmly in place.  The resistance movement sees no benefit in maintaining the occupation and demands a dramatic change in their future.

Palestine’s youth reject the divisions among the factions in the politics of Palestine.  The recent unity deal in Algeria has given them hope that political parties can work together in brigades such as the Lions’ Den, which has fighters from Hamas, Fatah, and others fighting together for a single goal of freedom.

On October 11, an Israeli soldier was killed in an attack north of Nablus, and two other shooting attacks against Israeli forces took place in Beit Ummar, near Al-Khalil, and in Sur Baher, a neighborhood in Al-Quds.

On October 14, Israeli forces killed 20-year-old Mateen Dabaya in a raid on the Jenin refugee camp. Dr. Abdallah Abu Teen, 43, rushed to Dabaya’s aid in front of the Jenin hospital and was also shot and killed by the Israelis in his attempt to give medical care to the injured young man. Two Palestinian paramedics and several civilians were also wounded in the attack by the Israelis at the hospital entrance.

On October 15, a Palestinian in his twenties was killed north of Ramallah, and Israeli forces raided Nablus and arrested a Palestinian man, while continuing to impose restrictions on Palestinians in the West Bank, the hallmark of an apartheid state.

On October 16, Mohammad Turkman, 20, died in Israeli custody because of wounds he had sustained. He had been wounded and captured by Israeli forces in Jenin in late September.

On October 20, Mohammed Fadi Nuri, 16, died after being shot in the stomach last month by Israeli troops near the city of Ramallah.

The Shuafat refugee camp in Al-Quds is completely sealed in a siege by Israeli forces as a form of collective punishment following an attack there, and Israeli police announced that it arrested 50 Palestinians in Al-Quds recently.

Riyad Mansour, the ambassador of Palestine to the UN, has denounced attacks by Israeli occupation forces and called on the UN to comply with international law and Security Council resolutions. Mansour noted that Israeli forces and settler militias “are relentlessly harassing, intimidating and provoking the Palestinian people in a ruthless manner,” and condemned the new attack on the city of Jenin.

The US enables Israel to remain an apartheid state

According to the various international human rights groups, which are often cited by the US as evidence of war crimes and atrocities by American foes,  “Israel” is an apartheid state.  The US and her western liberal allies were the chief critics of the former apartheid state of South Africa, and western criticism helped to fulfill the dreams of freedom and democracy in the land of Nelson Mandela.

The US is like a parent who allows “Israel” to continue self-destructive behavior.  Some parents of teenage drug addicts will buy drugs for their children to protect them from danger and arrest.  The parents are not willing to go through the tortuous procedure of rehab for the child, so they minimize the danger and make the drug addiction as safe as possible. This is known as enabling, and this is the role the US has chosen for itself in its relationship with “Israel” and Palestine.  On the one hand, the US claims to support the democratic aspirations of all peoples, but is unwilling to stand up to Israeli policies of racism, collective punishment, blockades, imprisonment without trial or legal aid, and other crimes perpetrated against the Palestinian people who are living under occupation.  The enabling stance of the US is destructive for both the US and the Palestinians, as the reputation of America suffers from global ridicule and shame.

Arab unity might be too much to ask for, but Palestinian unity has been agreed on in Algeria.  Hamas, Fateh, the Popular Front for the Liberation of Palestine, the PLO, and others signed the deal brokered by Algerian President Abdelmadjid Tebboune.  This deal resolves a 15-year political dispute among the various factions and looks forward to new elections.

“Jenin has demonstrated to the [Palestinian] leaders meeting in Algeria that national unity is built in the field,” Palestinian Prime Minister Mohammad Shtayyeh said.

Why is the west bank resisting?

The Palestinian Authority has lost control in Nablus and Jenin the West Bank.  The Palestinians view their leadership as an extension of Israeli control and oppression. The Lions’ Den in Nablus has claimed responsibility for the latest resistance operations against Israeli occupation forces.

On October 16, the Jenin Brigade announced they will support the Lions’ Den in their resistance to occupation, and this has raised the prospect of increased Israeli raids on Jenin and Nablus.

Israeli Security Minister Benny Gantz trivialized the threat of the Lions’ Den when he made statements on how his occupation forces will capture and eliminate its members.  “Israel” has depended on divisions among the Palestinian factions. However, “Israel” has never before faced a unified force of motivated youth who are willing to die for freedom and the chance to create a new future for themselves and their families. Revolutions occasionally succeed.

According to the Palestinian Ministry of Health, over 170 Palestinians were killed in the West Bank and Gaza since the beginning of 2022, making this year the deadliest since 2015.

Justin Welby, the Archbishop of Canterbury, and Cardinal Vincent Nichols, Archbishop of Westminster, have both expressed concern over the proposed UK embassy move from “Tel Aviv” to Al-Quds.  Liz Truss proposed the idea in her meeting with Israeli Prime Minister Yair Lapid last month.

Pope Francis, the UK’s churches, and the 13 denominations of Christians in occupied Al-Quds have always maintained a position supporting a UN resolution for a two-state solution between “Israel” and Palestine firstly, and secondly a final status for Al-Quds to be decided afterward. Previously, the Christians of occupied Al-Quds stated concern over moving embassies to the occupied city, “We are certain that such steps will yield increased hatred, conflict, violence and suffering in Jerusalem and the Holy Land, moving us farther from the goal of unity and deeper toward destructive division.”

Truss has wanted to follow in the footsteps of President Trump who defied international law when he shifted the US embassy to Al-Quds. The Truss plan was first suggested in her letter to the Conservative Friends of Israel (CFI), a pro-“Israel” lobby group, similar to the pro-Trump AIPAC in the US.

Australian Foreign Minister Penny Wong has announced Australia has reversed its recognition of West “Jerusalem” as the capital of “Israel”.

Wong also told reporters that “the Australian government remains committed to a two-state solution in which ‘Israel’ and a future Palestinian state can coexist in peace and security within internationally recognized borders. We will not support an approach that undermines this prospect.”