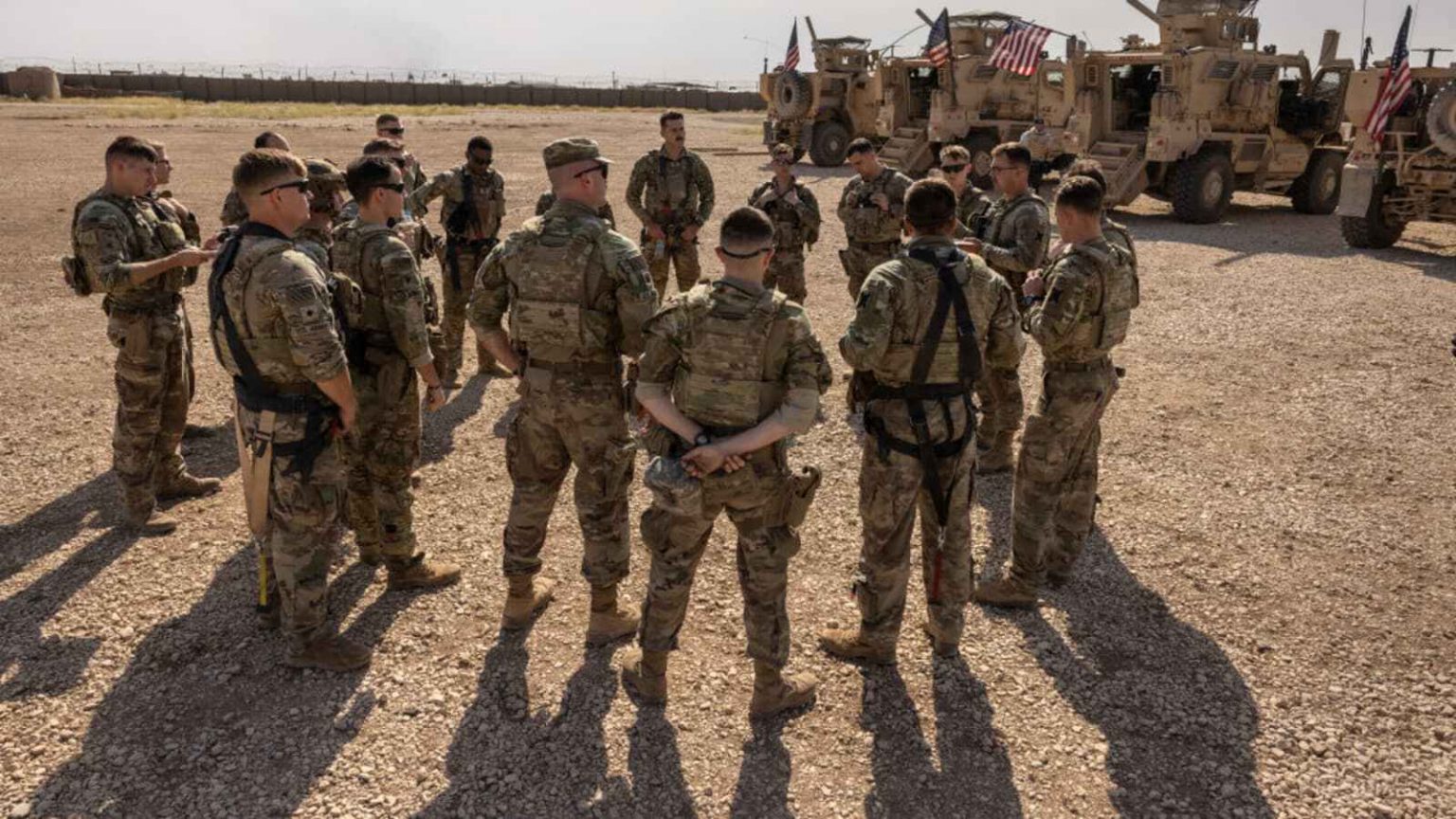 US Troops in Dispute with Their Terrorist Mercenaries in Syria

The US-employed terrorists, Maghawir al-Thawra (MaT), have turned against their partners, the US Army, stationed at al-Tanf base in the eastern Syrian desert.  On October 4, the terrorists, who are employed as mercenaries by the US military, attempted to break out of the illegal US base using a large-caliber machine gun on the pickup truck they were driving.  However, their break out was thwarted by the Syrian Arab Army who hold positions nearby and returned fire causing the MaT to retreat into the US base.

Russian Major General Oleg Yegorov, deputy chief of the Russian Center for Reconciliation of the Opposing Parties in Syria, reported the incident on Wednesday.

The US military had cordoned off al-Tanf base in the 55-kilometer deconfliction zone, shut down the internet, and ordered all mercenaries to lay down their arms and leave the base at once on foot.   On September 27, to reinforce the message, US coalition aircraft flew over the area and broke the sound barrier to drive home their insistence that mercenaries who refuse US military orders must leave.

The military council of the MaT has rejected the US military’s decision to remove the former commander of the MaT and replace him with a man who is not a member of the MaT.  The US-employed terrorists stated, “… that it rejects any foreign intervention in the appointment of its revolutionary leadership.”  The MaT must not have understood that when you are on the payroll of the US military you are obliged to follow their orders. Equally, the US Army must not have understood that when you partner with Radical Islamic terrorists you cannot expect them to follow orders.  As the saying goes, “When you feed a monster, it can turn to bite you.”

Al-Tanf is an illegal US military base in Homs province on the M2 Baghdad–Damascus Highway in the Syria-Jordan-Iraq border triangle.  The outpost began in early 2016 under the command of the Combined Joint Task Force-Operation Inherent Resolve (CJTF-OIR).  The MaT consists of at least 300 terrorists partnered with at least 200 US troops.  The Syrian government has demanded the US leave its occupation of several bases in Syria.

According to Israeli defense sources, al-Tanf hosts around 350 military personnel and civilians, “including some British and French forces that were described as ‘intelligence experts.”   CNN reported in August 2022, that there are approximately 900 US troops in Syria, with most of them split between the al-Tanf base and Syria’s eastern oil fields.

On September 29, Syrian Observatory for Human Rights sources reported that dozens of residents gathered near al-Tanf base to protest the coalition’s decision and called on its command to appoint any other officer from the faction instead of an outsider.

Brigadier General Muhannad al-Talaa was removed from his position by the US-led coalition late last month.  The former colonel, who defected from the Syrian Arab Army, was the founder of the MaT in 2016. Without explicitly charging al-Talaa with any crimes, local speculation points to the former commander’s involvement in instances of corruption, weapon and drug trafficking, and other violations.

Sources say he was removed from his command because he had traveled to Turkey, where he has family living, and while there met with Turkish Intelligence officials.  This would be an obvious violation of the chain of command in US military protocol and would border on spying charges.

However, the same sources point to al-Talaa’s dismissal of corruption, smuggling weapons, and drug trafficking crimes.  Al-Talaa worked with a core of corrupt terrorists within MaT, and if they were exposed by the US forces red-handed for weapons and drug smuggling, he would arrange for them to lay low for a period, and then he would engineer their return to full pay in the MaT.  Al-Talaa became an expert at manipulating the system whereby every six months there is a change of American officers at al-Tanf.

Jordan had demanded that the US remove al-Talaa from command of the MaT, but their pleas were not heeded until now.  The Jordanians became aware that it was al-Talaa and his group of criminal terrorists who were in control of the drug trade plaguing Jordan. This became a security threat to Jordan and its war on drugs. During al-Talaa’s final meeting with Jordanian military intelligence officers, they directly accused him of being a drug dealer.  They had arrested Abu Hamza al-Khudair, a well-known drug dealer, who admitted that al-Talaa was aware of the drug smuggling to Jordan.

Jordan formally cut off humanitarian support to the Rukban refugee camp next to al-Tanf because of al-Talaa’s drug trafficking, but he remained in his post until he was recently removed.

Al-Talaa was replaced by Muhammad Farid al-Qassem, a former captain who defected from the Syrian Arab Army and formed the al-Qaryatayn Martyrs Brigade with support from the US.

Al-Qassem, who is a violent radical, has never been a member of the MaT. According to people from the al-Qaryatayn area, his hometown, he is a “cruel person” and will not be suitable to manage the civilians living in desperate conditions in the squalor of the Rukban camp.

A former MaT commander at al-Tanf said, “There are suspicions that al-Qassem is also involved in smuggling operations through his deployment points.”  The media source close to the coalition agreed, adding that the new commander is also accused of involvement in “a murder and other violations.”

Sources close to the base thought that al-Qassem was chosen because he is an outsider, and will not support the criminal activity his predecessor was involved in, and the Jordanians would accept working with him. However, he has a troubled past with the US military when he was kicked out of the Pentagon training program in 2017 for violations.  After that, he began working with the CIA on another program that dealt with terrorist training for the US-led coalition and American military forces in Syria.

The Rukban refugee camp for internally displaced Syrians is located within the de-confliction zone which includes the al-Tanf base.  Camp residents are split on their acceptance of the decision to remove al-Talaa.  Citizens of the camp live in deplorable conditions and are dependent on the MaT for supplies after humanitarian aid was cut off in 2019.  The US, Syria, and Jordan all have fallen short in supplying aid to the thousands of men, women, and children at Rukban suffering in the desert.

Camp residents who had survived depending on the smuggling activities of al-Talaa are protesting his removal, while others who suffered from his command are accepting the US decision to remove him, and the rest are quietly trying to survive without taking one side or the other.

On September 29, the local council of Rukban published on Facebook, photos, and videos showing protests in which dozens of camp residents participated inside the walls of Tanf, in opposition to the isolation of al-Talaa.

Al-Qassem is said to have a better working relationship with Jordan, which supplies water to the Rukban camp.  However, his appointment is not likely to change Jordan’s policy towards the camp, which does not support aid to the camp other than water.

In October 2019, President Trump ordered the withdrawal of US troops from Syria, but the Pentagon would allow his order to stand, and in the end, the US military won the day.  The US involvement in Syria began in March 2011 in Deraa, and the CIA began its program, Timber Sycamore, in 2012 to provide training and weapons to thousands of terrorists following Radical Islam in their effort to overthrow the secular government in Damascus.  A parallel program run by the Pentagon began in 2014 called Train and Equip, which was a covert program to train terrorists.  In 2017, President Trump shut down the billion-dollar CIA program.

When President Obama designed the 2011 regime change war in Syria, military experts warned that US weapons could fall into the hands of Al Qaeda or other similar terrorist groups.  Obama’s Free Syrian Army died off years ago and morphed into Jibhat al-Nusra, the Al Qaeda affiliate in Syria, who today occupy Idlib, the last remaining terrorist-controlled territory and are holding three million people as human shields.  Al-Talaa was an American-backed terrorist who pulled in a monthly paycheck from Uncle Sam and supplemented his US dollars by selling US weapons to other terrorist groups and smuggling drugs into Jordan.  The US tax-payer-voter should be questioning why the US partners with Radical Islamic terrorists, and perhaps demanding a change in command in the US coalition in Syria.  “When you feed a monster, it can turn to bite you.”