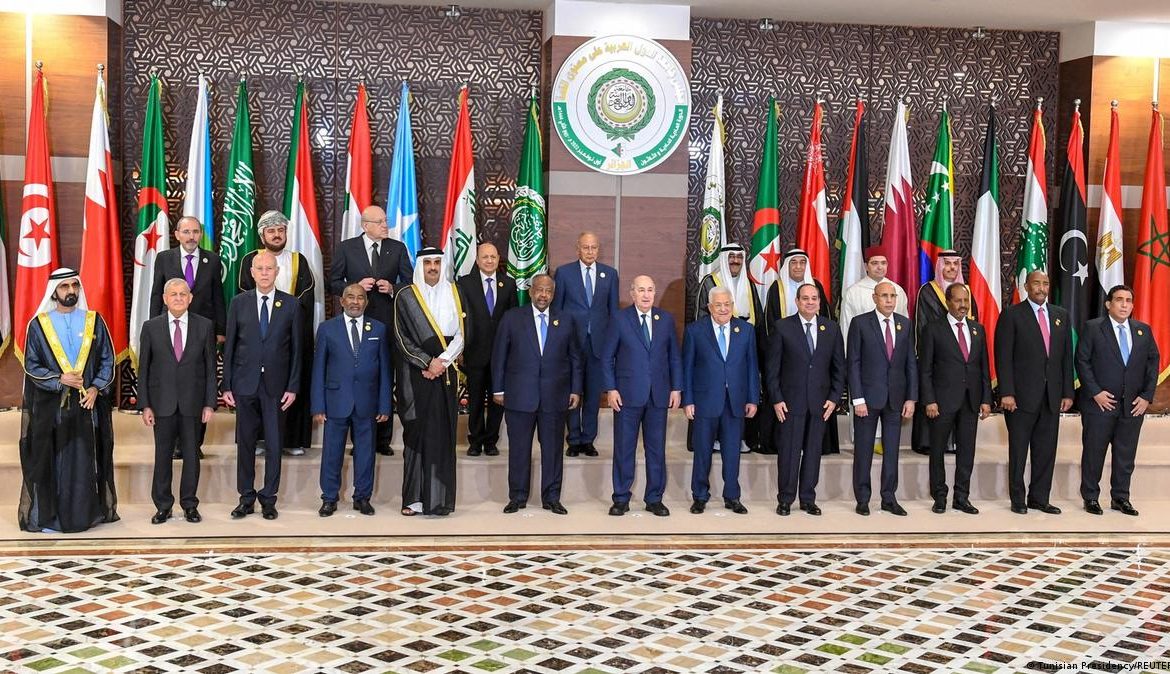 The Arab League met in Algeria for the first time in two years, and their final declaration called for freedom for the Palestinian people who have suffered under a brutal Israeli military occupation for almost six decades.  The meeting of nearly 22 nations across the Middle East and North Africa coincided with Israeli elections, which has brought to power a far-right party that wants to annex the West Bank and deport Palestinians from their homes.

Arab leaders attending the meeting tip-toed around the Abraham Accords, which saw the United Emirates and Bahrain normalize their relations with Israel, with Saudi Arabia later allowing for over-flights of the Kingdom by Israeli aircraft, and is seen as a potential precursor to wider Arab normalization with Israel.

Although the Arab world is deeply divided and polarized, the League managed to deliver a final declaration focused on the core issue of Palestinian human rights and freedom.

The Arab League General Secretariat affirmed its rejection of all Israeli settlement plans, condemned what it described as the annexation of Palestinian territory, stressed the need to compel the Israeli occupation to implement the relevant UN resolutions and work toward a comprehensive and fair two-state solution under the 2002 Arab peace initiative.

Algerian President Abdelmadjid Tebboune said, “Our main and first cause, the mother of all causes, the Palestinian issue, will be at the heart of our concerns and our main priority.”

Secretary General of the United Nations, Antonio Guterres, attended the meeting and appealed for unity across the Arab world.

“Division opens the door to foreign, non-Arab, interference, terrorism, manipulation, and sectarian strife. But united, your leadership can shape a region that makes the most of its enormous potential and contributes to global peace and security,” Guterres said.

Foreign intervention in the Middle East has mainly come from the US.  Muammar Gadhafi of Libya famously addressed the Arab League in 2008 and held up a paper that was sent to him and all other Arab leaders from the US telling them what their agenda was to be, and the expected results of that Arab League meeting.  Gadhafi went on to prophetically warn his counterparts that the US had eliminated Saddam Hussein, and they could all expect they would be next.

Guterres focused attention on the continued suffering of the Palestinian people, underlining the UN’s explicit position that the occupation must end.

“Our shared goal remains two States – Israel and Palestine – living side by side in peace and security, with Al-Quds/Jerusalem as the capital of both States,” he said.

“We must do all we can to ensure the continued success of the Black Sea Grain Initiative to provide relief to those in need, including countries in the Middle East and North Africa relying on accessible and affordable food and fertilizers — both from Ukraine and the Russian Federation,” he said.

The UN is concerned with global famine due to the Ukraine war, but where was the UN when the huge wheat stores in northeast Syria were stolen by the Radical Islamic terrorists utilized by the US-NATO attack on Syria for ‘regime change’?  The wheat was taken to Turkey and then sold to the EU where France used it for their croissants, and Italy for its pasta.

Syria was not invited back

Syria’s participation in the Arab League has been suspended since November 2011, which demonstrates a large group of Arab nations supported the US-NATO attack on Syria using the Muslim Brotherhood ideology and terrorist foot soldiers.

In July 2022, Algeria’s foreign minister decried Syria’s decade-long suspension from the Arab League during a visit to Damascus, indicating support for the war-torn country’s return to the organization under President Bashar Assad.

Arab countries have inched closer toward restoring ties with Syria in recent years, most notably the United Arab Emirates and Bahrain. In October 2021, Jordan’s King Abdullah II received a call from President Assad, the first between the two leaders in a decade.

“Syria’s absence from the Arab League harms cooperation between Arab countries,” said Algerian Foreign Minister Ramtane Lamamra, speaking at a news conference with his Syrian counterpart, Faisal Mekdad, and having met with President Assad while delivering a letter from Algerian President Abdelmadjid Tebboun.

While the Arabs were meeting in Algeria, Likud party leader Benjamin Netanyahu, on trial on corruption charges, was engineering his return to power in Israel through an unusual alliance with an ultra-nationalist party.

Itamar Ben-Gvir, the leader of Israel’s Jewish Power faction, lives in the illegal settlement of Kiryat Arba in the Palestinian city of Hebron. The far-right extremist leader appears likely to take a senior role in government after the Religious Zionism bloc he co-heads, with Bezalel Smotrich, became the third-largest in parliament with 14 seats, the largest gain of any religious party in Israel.

Ben-Gvir has demanded to be appointed as a public security minister in the new Netanyahu government.  That position is problematic because of the history of Ben-Gvir, who has been convicted in 2007 of racist incitement and support of a terrorist group on both the US and Israeli terror blacklists. In the past year, he led a settler storming of the Al-Aqsa Mosque compound and has previously acted as a legal defense for Lehava, a racist group, which has called for the full expulsion of Palestinians, and a ban on Christmas. It views Christian churches as places of idol worship.  The Israeli government has long had the plan to convert churches and Bethlehem into tourist attractions devoid of any connection to practicing Christianity.

Besides deporting all Palestinians, Ben-Gvir also plans to expel Palestinians who are Israeli citizens and have been democratically elected to the Knesset, along with leftist Israeli Jews who are MPs.

“When we form the government, I will promote the Deportation Law, which will deport anyone who acts against the State of Israel or IDF soldiers,” Ben-Gvir said in an interview last August.

Ben-Gvir pulled his gun and admonished police officers responding to an altercation with Palestinians, “If they are throwing stones, shoot them.”

The path forward for Netanhayu’s government may depend on the upcoming November 8 elections in the US, where Republicans may make gains, which may be a green light for Netanyahu and extremism.

The 1949 Geneva Convention, which Israel signed, it is prohibited for an occupying power to move its own population into the territory. Since the occupation of the West Bank in 1967, numerous UN resolutions affirm that Israel’s occupation is illegal, and the settlements on the West Bank have no legal basis.

Despite the international consensus, Israel continues to build illegal settlements on the West Bank, which currently number over 100, with 450,000 Israeli settlers living there, and another 220,00 Jewish settlers living in East Jerusalem.

Israel is an apartheid state

On March 25, 2022, Michael Link, UN Special Rapporteur, concluded that Israel met the conditions of an apartheid state. His findings reported that an institutionalized regime of systematic racial oppression and discrimination has been established, a system of alien rule had been established with the intent to maintain the domination of one racial-national-ethnic group over another, and the imposition of this system of institutionalized discrimination with the intent of permanent domination had been built upon the regular practice of inhumane acts.

The question for liberal western democracies is, “Can democracy, religious extremism, and apartheid policies co-exist?” A follow-up question is, “Can the west continue to support Israel?”