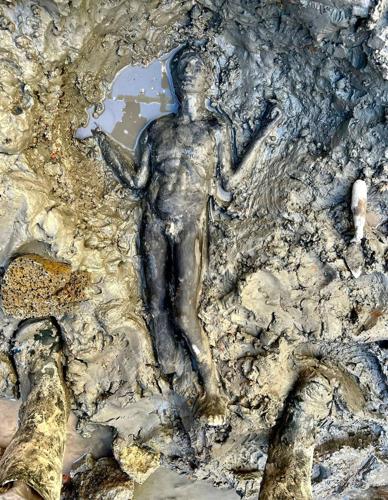 Historians may have to review the history of the relationship between the Etruscan civilization and the Roman Empire, after Italy’s Culture Ministry on Tuesday announced the discovery of several dozen bronze statues believed to be over 2,000 years old in an ancient Tuscan thermal spring.

Massimo Osanna, the ministry’s director of museums, hailed the discovery as one of the most significant ever in the Mediterranean region. He explained that the bronze figurines – which depict humans, gods, and individual body parts – were found perfectly preserved thanks to them being covered in mud. Alongside the statues, archeologists also reportedly found some 5,000 gold, silver, and bronze coins.

According to Jacopo Tabolli, who coordinated the dig for the University for Foreigners in Siena, the discovery sheds new light on the Etruscan civilization and the expansion of the Roman Empire between the 1st and 2nd centuries BC.

“While there were social and civil wars being fought outside the sanctuary … inside the sanctuary, the great elite Etruscan and Roman families prayed together in a context of peace surrounded by conflict,” Tabolli said, noting that the discovered statues bear both Etruscan and Latin inscriptions.

“This possibility to rewrite the relationship and dialectic between the Etruscans and Romans is an exceptional opportunity,” he proclaimed, as cited by the Associated Press.

To showcase the significance of this discovery, Italy’s Culture Ministry has announced the construction of a new museum in the area to house the newly-found antiquities.

The Etruscan civilization was one of several civilizations inhabiting the Italian peninsula before the rise of the Roman Empire. It is believed to have been developed by the people of the Etruria region as early as 900 BC. The Etruscan states shared a common language and culture and covered the territory of what is now Tuscany, western Umbria, and northern Lazio.

The Etruscan civilization was later assimilated into the Roman Empire. Historians believe the process began in the late 4th century BC as wars broke out between the Romans and Etruscans. The Roman Empire fully incorporated all of the Etruscan territories in 27 BC.

this article is originally published at RT.com