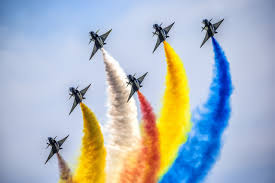 China’s annual International Aviation and Aerospace Exhibition in the Pearl River Delta city of Zhuhai is often used to showcase the country’s rapidly advancing aerospace capabilities. Past debuts have included the FC-31 and J-20 stealth aircraft and the first-ever quantum radar, and the city welcomes elite acrobatics teams from around the globe.

As the 14th Zhuhai Air Show kicked off on Tuesday, attendees got their first look at several new items in the People’s Liberation Army (PLA) arsenal, including new hypersonic missiles, anti-drone technology, and the first passenger airliner designed and made in China.

More than 740 domestic and overseas enterprises from 43 countries and regions are present at the exhibition or online, and some 110 aircraft are positioned on display, as well as numerous land vehicles and weapons.

Another hypersonic weapon, labeled 2PZD-21, was displayed mounted under the wings of a Xi’an H-6K bomber, a highly modernized version of the Soviet-built Tupolev Tu-16 which is China’s only strategic bomber.

According to experts, the missile closely resembles Russia’s Kh-47 Kinzhal, a hypersonic surface strike missile carried by the MiG-31K interceptor and Tu-22M3 bomber – neither of which China uses. The Kinzhal also has a range of more than 1,240 miles and is reported to be capable of carrying a nuclear warhead.

There were also several air defense systems at Zhuhai, including an anti-drone defense system that is reportedly capable of detecting and intercepting drone swarms. The system is made by China Aerospace Science and Industry Corporation (CASIC) and called the ZR-1500, and is itself unmanned.

A new short-range air defense system (SHORAD) was also on display, called the HQ-11. The system is intended to protect against cruise missiles, guided munitions, and aircraft.

this article is originally published at Sputnik.com