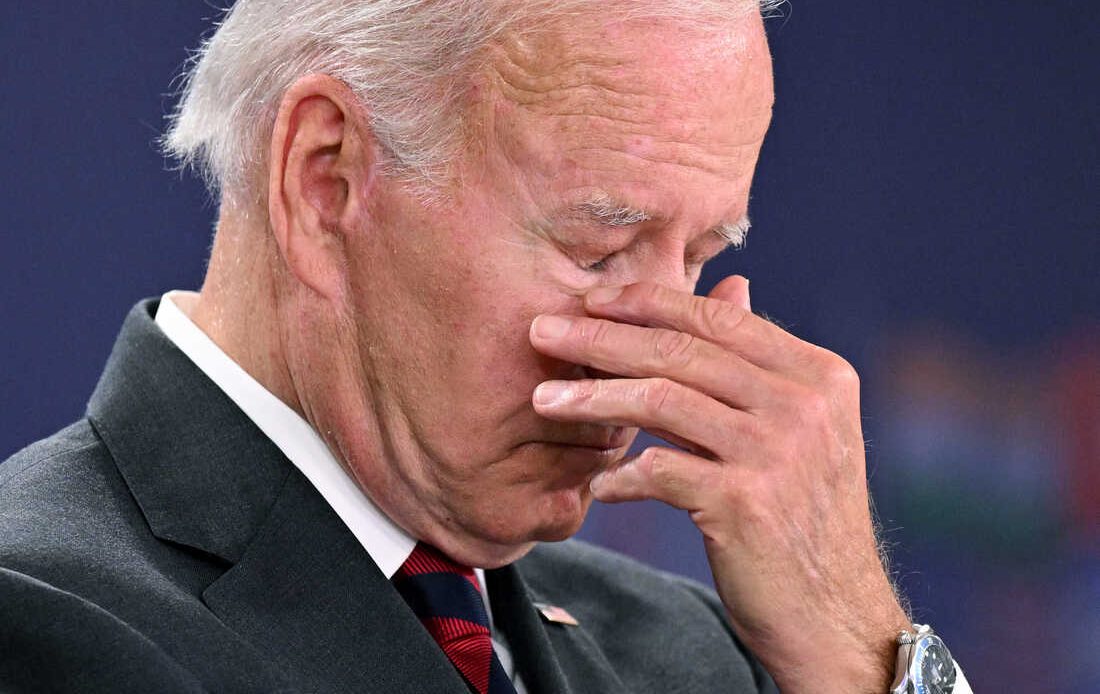 US President Joe Biden and Israel's caretaker prime minister (not pictured) take part in a virtual meeting with leaders of the I2U2 group, which includes, US, Israel, India, and the United Arab Emirates, at a hotel in Jerusalem, on July 14, 2022. (Photo by MANDEL NGAN / AFP) (Photo by MANDEL NGAN/AFP via Getty Images)

A federal judge in the state of Texas has blocked United States President Joe Biden’s hallmark plan to forgive thousands of dollars in student debt.

“In this country, we are not ruled by an all-powerful executive with a pen and a phone. Instead, we are ruled by a Constitution that provides for three distinct and independent branches of government,” Pittman wrote in his decision.

“The Court is not blind to the current political division in our country. But it is fundamental to the survival of our Republic that the separation of powers as outlined in our Constitution be preserved.”

White House Press Secretary Karine Jean-Pierre said the Democrat administration disagreed with the ruling and had filed an immediate appeal.

Biden’s plan, announced in August, would cancel $10,000 in student loan debt for those making less than $125,000 or households with less than $250,000 in income. Pell Grant recipients, a category reserved for students in significant financial need, would get an additional $10,000 in debt forgiven.

The programme was widely popular among young people, and was credited with energising the youth vote in the 2022 midterm elections.

“The President and this Administration are determined to help working and middle-class Americans get back on their feet, while our opponents — backed by extreme Republican special interests — sued to block millions of Americans from getting much-needed relief,” Jean-Pierre said in a statement.

The ruling stemmed from a lawsuit by two borrowers who were partially or fully ineligible for Biden’s loan forgiveness plan. The plaintiffs argued the programme did not follow proper rule-making processes and was unlawful.

They were backed by the Job Creators Network Foundation, a conservative advocacy group founded by Bernie Marcus, a co-founder of the building-supply chain Home Depot.

The legal challenges have created confusion about whether borrowers who expected to have debt cancelled will have to resume making payments come January 1, when a pause prompted by the COVID-19 pandemic is set to expire.

About 26 million people in the US have applied for student loan forgiveness, and the US Department of Education has already approved requests from 16 million, according to the White House.

While the stay that followed the legal challenge brought by the six states temporarily stopped the administration from actually clearing debt, the White House has encouraged borrowers to continue applying for relief, saying the court order did not prevent applications or the review of applications.

The Biden administration has argued the plan was legal under existing legislation that allowed the secretary of education to “waive or modify any statutory or regulatory provision applicable to the student financial assistance programs … as the Secretary deems necessary in connection with a war or other military operation or national emergency”.

The administration had argued the COVID-19 pandemic created the authorisation needed to launch the programme.

In his 26-page ruling, Pittman said it was irrelevant if Biden’s plan was good public policy, calling it “one of the largest exercises of legislative power without congressional authority in the history of the United States”.


This article is originally published by aljazeera.com