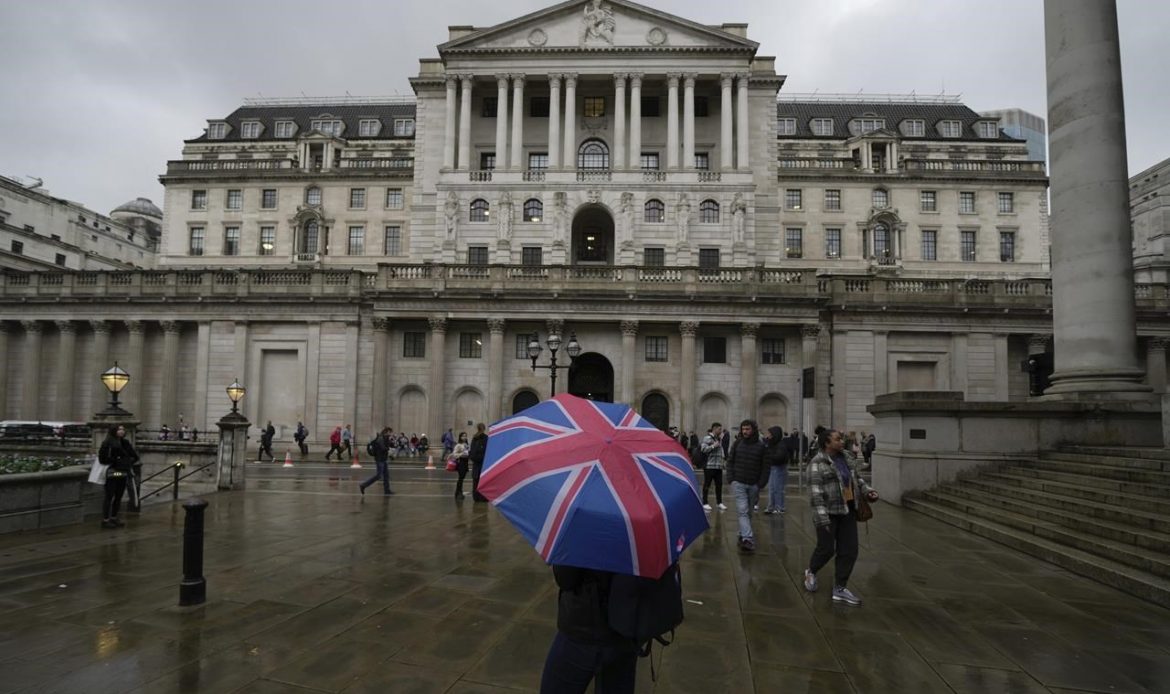 FILE - A woman with an umbrella stands in front of the Bank of England, at the financial district in London, Thursday, Nov. 3, 2022. Britain’s economy shrank in the three months to September, official statistics said Friday, Nov. 11, 2022, as forecasters warned of many months of contraction to come. The Office for National Statistics said gross domestic product fell by 0.2% between July and September, a smaller-than-expected contraction that nevertheless is seen to signal the start of a long recession. (AP Photo/Kin Cheung, File)

The United Kingdom’s economy shrank in the three months to September at the start of what is likely to be a lengthy recession, underscoring the challenge for finance minister Jeremy Hunt as he prepares to raise taxes and cut spending next week.

Economic output shrank by 0.2 percent in the third quarter, Friday’s official data showed.
But it was the first fall in the gross domestic product (GDP) since the start of 2021, when the UK was still under tight coronavirus restrictions, as households and businesses struggle with a severe cost-of-living crisis.

The UK’s economy is now further below its pre-pandemic size – it is the only Group of Seven economy yet to recover fully from the COVID slump – and is smaller than it was three years ago on a calendar-quarter basis.

The Resolution Foundation think-tank said although the fall was smaller than investors had feared, it left the UK on course for its fastest return to recession since the mid-1970s.

Sobering backdrop
Its research director James Smith said the figures provided a sobering backdrop for Hunt’s November 17 budget announcement, when he will try to convince investors that the UK can fix its public finances – and its credibility on economic policy – after Liz Truss’s brief spell as prime minister.

“The chancellor will need to strike a balance between putting the public finances on a sustainable footing, without making the cost-of-living crisis even worse, or hitting already stretched public services,” Smith said.

Responding to the data, Hunt repeated his warnings that tough decisions on tax and spending would be needed.

“I am under no illusion that there is a tough road ahead – one which will require extremely difficult decisions to restore confidence and economic stability,” Hunt said in a statement.

“But to achieve long-term, sustainable growth, we need to grip inflation, balance the books and get debt falling,” he added. “There is no other way.”
Fears turning into reality
The Bank of England said last week that the UK’s economy was set to go into a recession that would last two years if interest rates were to rise as much as investors had been pricing.

Even without further rate hikes, the economy would shrink in five of the six quarters until the end of 2023, it said.

“Fears of a recession are turning into reality,” Suren Thiru, economics director for the Institute of Chartered Accountants in England and Wales, said.

“This fall in output is the start of a punishing period as higher inflation, energy bills and interest rates clobber incomes, pushing us into a technical recession from the end of this year.”


This article is originally published by aljazeera.com