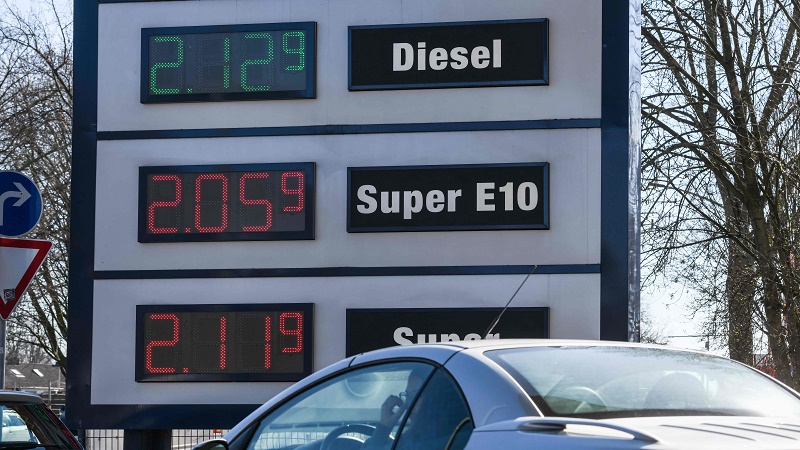 A photograph taken on March 8, 2022 shows a board with prices of gasoline and diesel at a petrol station, in Essen, western Germany. (Photo by Ina FASSBENDER / AFP)

The Labor Department reported Thursday that prices for fuel oil surged 20% last month after declining 2.7% in September. That is markedly higher than the nationwide average increase of 7.7%.

The price spike comes amid a nationwide and global shortage of diesel fuel.

Government data released last month showed the country had just 25 days of diesel supply remaining, with stockpiles at their lowest level for records dating to 1993. In the Northeast, where more people depend on diesel to heat their homes in the winter, supplies are at one-third of their typical levels during this time of year, the Department of Energy said.
The result has been skyrocketing prices that are likely to trickle down to consumers who are already confronting the worst inflation spike in a generation.

Diesel prices for November delivery have surged 38%, which will likely translate into more expensive home heating oil prices, particularly in the Northeast, according to Andy Lipow, president of Lipow Oil Associates, LLC.
Prices are expected to climb even higher in coming months with weekly demand at the highest point in two years amid more trucking, farming and heating reliance.

“The national average price for diesel today is $5.30 per gallon and is expected to go up 15 to 20 cents in the next few weeks,” Lipow said.
The diesel shortage stems from a perfect storm of events. When the COVID-19 pandemic shut down a broad swath of the U.S. economy, it also brought to a halt most refineries in addition to delaying the startup of new refining capacity, Lipow said.

A weeks-long strike at a refinery site in France last month exacerbated the problem, and experts expect the European Union ban on the purchase of Russian crude oil and diesel that begins later this year to further impact supply.
On top of that, a phenomenon known as market backwardation, when prices in the near term are higher than in the future, has made building inventory a “fool’s errand,” Lipow said.

“All of this is occurring as inventories around the world are drawing down,” he said. “The result is rapidly rising diesel prices.”

This article is originally published by foxbusiness.com