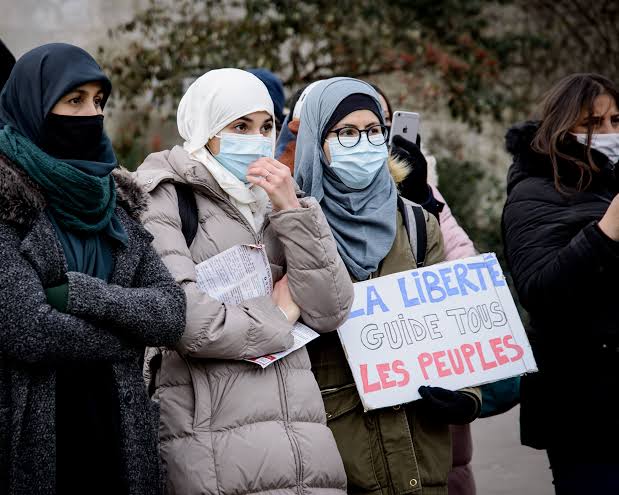 To cover, or not to cover, that is the question women are not allowed to answer

In France, it is banned in schools, and in Iran it is mandatory.  The French fashion police are interfering with women’s freedom while criticizing their counterparts in Iran.

A piece of cloth used by women to cover their hair has become a point of contention. The Orthodox Jewish women and the American Amish women wear head coverings, but when a Muslim woman wears a headscarf (hijab) it becomes an issue.

“We constantly vilify these morality police in Iran and Afghanistan, but in countries like France, if you are wearing the full veil, police will tell you not to wear it and give you a punishment. How is that different?” said Semiha Topal, visiting assistant professor of religious studies at William and Mary.

She said, “The state telling them what to wear or what not to wear, it’s a way of controlling the bodies of women. That’s the main issue. It’s not religion or Islam or any other religion.”

The issue is not religious, but a question of politics and freedom. Women want to be free to make their own choices.

In 2004, France passed a law banning headscarves in state schools, government buildings, and universities. Public officials such as teachers, firefighters, or police officers are also barred from wearing a headscarf while they are at work.

France is home to the largest Muslim population in Europe with 5 million residents.  There is a French ban on wearing the niqab, which hides the face and hair, and the burqa, which covers hair, face, and eyes, on the grounds of security.

According to research, the 2004 headscarf ban “reduces the secondary educational attainment of Muslim girls and affects their trajectory in the labor market and family composition in the long run.”   A UN committee ruled that France violated an international rights treaty by banning a Muslim woman wearing a headscarf from attending school.

The French phobia about head scarves has impacted cancer victims who may wear a head covering after hair loss due to chemotherapy.  Some have been verbally challenged and humiliated in public.

The overly zealous policing of those wearing a headscarf in France is indicative of the polarization between Muslims and western European societies.

Since 2010 the niqab and burka cannot be worn in any public space in France, at risk of a €150 fine, the headscarf, however, is legal in public spaces including shops, cafés, and the streets.

In contrast, the US, UK, Canada, and New Zealand allow headscarves in the classroom.

In November 2019, demonstrations in Paris saw placards reading messages such as “French and Muslim, proud of our both identities”, and “Don’t touch my headscarf, respect my choice, no to Islamophobia” as part of a demonstration against Islamophobia

France also has a ban on the Burkini, which is a fully covered swimming suit, at beaches or public swimming pools. France’s highest administrative court voted to uphold the countrywide ban in June.

The French senate in January voted 160 to 143 to ban the wearing of the hijab in sports competitions, even though FIFA allows them.

French politicians from the Left and the Right have rallied against Muslim-linked garments they view as challenging “laicite”, which is France’s version of secularism.

With the Paris Olympics due to take place in just two years, some xenophobic populists saw this as a good opportunity to apply anti-Muslim bigotry to the sport.  Western Europeans preach freedom for all women, except for Muslim ones.

The debate came to center stage when Vogue France initially praised the American actor Julia Fox for looking stylish with a black head-covering during a visit to Paris Fashion Week.

“Yes to the headscarf!” read an exciting Vogue caption, before it was edited out.  Instagram users pointed out that Vogue was hypocritically praising a white American for covering her head in France where Muslim women are actively oppressed for doing so.

In 2010, French President Sarkozy and German Chancellor Angela Merkel, stood firm in their opposition to Turkey’s bid to join the EU.  The leaders agreed that Turkey, with a mainly Muslim 71-million population, has no place in Europe.

“The rules of the game have changed” since Turkey first applied to become a member of the bloc six decades ago, Merkel said through an interpreter after talks with Turkish Prime Minister Recep Tayyip Erdogan.

In Turkey, the ban on women wearing a headscarf in university was lifted in 2008 and fully lifted in 2017, which the government says is meant to improve democracy.

The ban dated from 1925 when Mustafa Kemal Ataturk passed reforms to move towards Westernization and secularism which banned women from wearing the hijab in government buildings, universities, state functions, and events. He also granted women the vote in 1934, 11 eleven years before France.

Mahsa Amini, 22, died on September 16, following her arrest by the country’s so-called “morality police” for allegedly violating the requirement to wear a hijab that fully covers a woman’s hair. Thousands of women took to the streets in cities across Iran, removing their hijabs and cutting their hair in solidarity.

The Islamic Republic’s current forced hijab law demonstrates how the state can regulate women’s clothing by dictating something as personal as clothing.

In 1936, after a visit to Turkey, Iran’s leader Shah Reza Pahlavi banned the wearing of the hijab. The police had instructions to pull veils off women. The ban was lifted in 1941 due to resistance from the clerical establishment.

By the 1970s, the hijab came to symbolize an anti-Western stance and a challenge to the last Shah of Iran, who was overthrown in 1979. The Islamic Republic that emerged after the revolution made the hijab mandatory in 1981 and Iran continues to dictate women’s fashion.

His interview with the Frankfurter Allgemeine Zeitung (FAZ) came after German interior minister Nancy Faeser called for World Cup tournaments to be awarded according to certain standards, which was a direct jab at Qatar.

Al Thani asserted that different German standards apply to football than to energy policy, he said “On the one hand, the German population is misinformed by government politicians. On the other hand, the government has no problem with Qatar when it comes to energy partnerships and investments, or the rescue of German citizens from Afghanistan.”

There have been calls within German football to “Boycott Qatar 2022,” with massive banners on display at Bundesliga matches recently.

Al Thani accused critics of Qatar of bigotry, and said “It seems difficult for some to accept that a small country, a small Arab country, should be allowed to host the World Cup.”

“Racist stereotypes appear again and again. But that is not the case everywhere for a long time. There are fewer than ten countries from which such sharp criticism comes. The rest of the world is happy with us.”

In April 2022, Right-wing candidate Marine Le Pen pledged to impose a total ban on the wearing of the Muslim headscarf in all public places if elected President of France.  She calls the hijab “Islamist clothing”, and her party proposed an “anti-Islamist” bill last year.

Le Pen found an audience for her anti-Islamic political rhetoric and was accused in 2015 of inciting religious hatred after she equated Muslims praying in the streets of France to Nazi occupation during WWII.

In the aftermath of the September 11, 2001 attacks in the US, the West equated Islam with terrorism.  Western European society has a real problem dealing with Muslims who are now a very sizeable community across Europe, especially in France and Germany.

The ability of a state to dictate how a woman appears in public is all about communicating to the citizens the strength of the state.