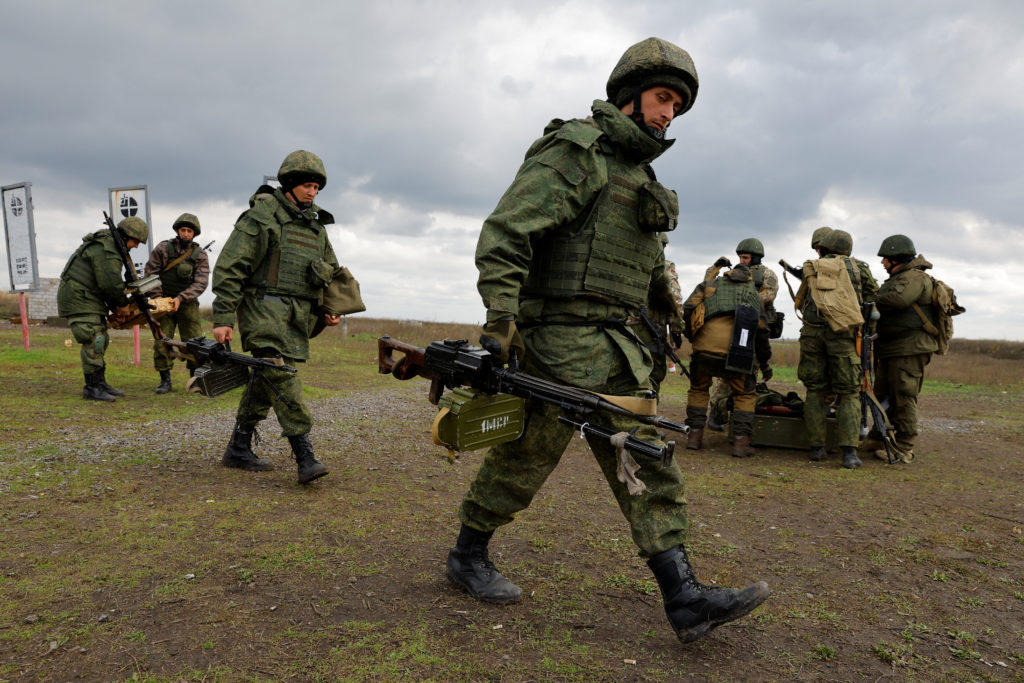 Russian newly-mobilised reservists train at a shooting range in the course of Russia-Ukraine conflict in the Donetsk region, Russian-controlled Ukraine, October 10, 2022. REUTERS/Alexander Ermochenko

Kremlin Does Not Consider Decision to Leave Kherson Humiliating

Kremlin spokesman Dmitry Peskov said on Friday that Moscow does not consider the decision to leave Kherson humiliating.

“No, no,” Peskov said, answering a relevant question.

The Kherson region is a subject of Russia, and its status cannot be changed, Kremlin spokesman Dmitry Peskov said.

“This is a subject of Russia. [The status of] this subject is legislatively fixed, defined. There are no and can be no changes,” Peskov said, when asked whether Russia continued to consider the entire Kherson region as its own territory and whether it would legally define the status of the region’s right-bank part.

The Russian troops have taken up pre-prepared defensive positions on the left bank of the Dnipro River after the crossing, the Russian Defense Ministry said on Friday.

On Wednesday, Commander of the Joint Russian Forces in Ukraine Sergey Surovikin reported to Minister of Defense Sergei Shoigu that it was necessary to withdraw the troops from the right bank of the Dnepr river, including the city of Kherson, and organize a defense on its left bank. This plan was accepted by the defense minister.

In October, Russia started the evacuation of civilians from the Dnepr right bank to other regions in order to save them from constant shelling by Ukrainian forces.

The Ukrainian artillery, using NATO weaponry, targeted various infrastructure facilities, including the Kakhovka Hydroelectric Station. If the dam were to be destroyed, Kherson and many nearby settlements would have been flooded, which would have led to the blockade of the Russian forces on the right bank.

Russia launched its special military operation in Ukraine on February 24, after the Donetsk and Lugansk people’s republics appealed for help in defending themselves against Ukrainian provocations. In response to Russia’s operation, Western countries have rolled out a comprehensive sanctions campaign against Moscow and have been supplying weapons to Ukraine.