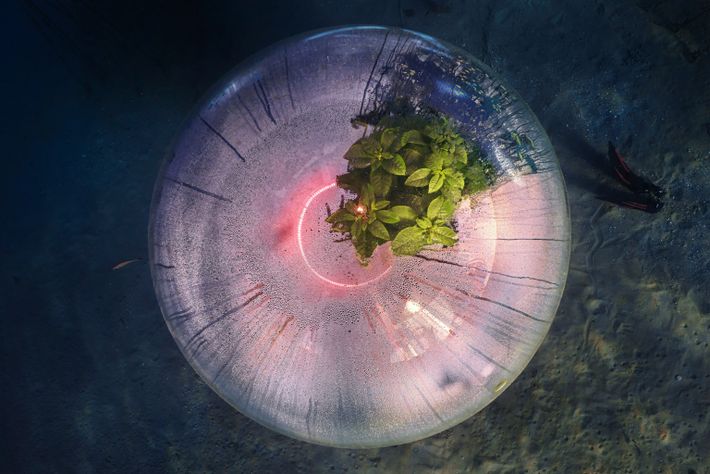 An hour’s drive from Genoa in northwestern Italy, off the coast of the picturesque village of Noli, nine transparent plastic bubbles appear to hover underwater—their trapped air fragrant with the scent of herbs.The installation, known as Nemo’s Garden, is an experiment meant to test the viability of underwater greenhouses.

The submerged “biospheres” consist of plastic domes rigged up with hydroponic equipment, plant seeds, and air-circulating fans. Each dome is like “a miniature space station,” says Sergio Gamberini, the inventor of Nemo’s Garden and the CEO of Ocean Reef, a U.S.-Italian company that primarily makes scuba diving equipment.Plants experience unique stressors at depth, so they grow differently in Nemo’s Garden than they do on the surface. One 2020 study found that the garden’s basil contained more chlorophyll and antioxidants than surface basil did, as well as a different mix of essential oils.

Gamberini’s hope is to help arid coastal countries grow more food without the costly need to desalinate water for crops. His unconventional approach has fascinated photographer Luca Locatelli, who visited the site last year to explore its biospheres and even sample pesto made with the undersea basil.

“We need someone who thinks about crazy things—not only ordinary inventions—that are coming out of a real passion,” Locatelli says. “It might be something, it might not, [but] I like the fact that someone is so brave to invest money on such a thing.”Top: Each plastic structure—called a biosphere—resembles a large balloon and holds about 2,000 liters (528 gallons) of air. The biospheres are anchored beneath 15 to 36 feet of water.Bottom: As sunlight warms the humid air within each dome, fresh water naturally condenses on the walls, which can be collected to water the plants. The first five biospheres of Nemo‘s Garden were arranged in a pentagon around a central hub. Over the years, four more have been added (one visible at top right).

Two team members anchor one of the biospheres to the seabed with chains. Small platforms beneath each biosphere‘s dome lets divers enter to check in on and harvest plants.Top: The devoted team behind Nemo’s Garden includes Swedish-born diver Teddie Falkeborn.Bottom: Luca Gamberini, the son of Nemo’s Garden inventor Sergio Gamberini, serves as the project’s head of marketing.0:12Top: Today‘s robust biospheres are a far cry from the original prototype for Nemo‘s Garden, which was made out of a transparent balloon and a plastic food container.Bottom: The seawater circulating outside the biospheres helps keep their temperatures fairly steady.Top: After their harvest, plants are brought to the surface in clear plastic bags, dried, and stored until they can be used.Bottom: In addition to basil, Nemo‘s Garden has experimented with tomatoes, okra, beans, green peas, herbs, and flowers.

Each biosphere‘s sensors wirelessly report real-time readings such as humidity, temperature, and air composition to a central control tower styled as a “Tree of Life.”A small ring of lights on the ceiling of each biosphere provides extra illumination, and a small fan helps keep the air circulating.So far, the underwater farm’s most visible environmental impact is a surprising one: Acting like an artificial coral reef, the garden appears to have attracted marine life to the surrounding area.Luca Locatelli is an environmental photographer and filmmaker focused on the relations between people, science and technology, and the environment. This story is part of an immersive exhibition created for the Museum of Photography Gallerie d’Italia Torino-Intesa San Paolo in partnership with the Ellen McArthur Foundation.