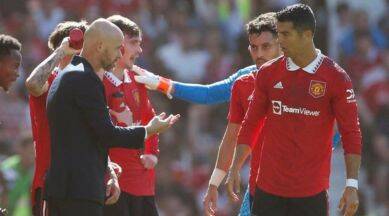 Ronaldo, who re-joined United in August 2021 and finished as their top scorer in all competitions last season with 24 goals, asked to leave the club in the summer.

“I think the fans should know the truth,” the Portugal international added. “I want the best for the club. This is why I come to Manchester United.

“But you have some things inside that don’t help [us] reach the top level as City, Liverpool and even now Arsenal…a club with this dimension should be top of the tree in my opinion and they are not unfortunately.

“As Picasso said, you have to destroy it to rebuild it (the artist’s exact quote was: ‘Every act of creation is first an act of destruction’) and if they start with me, for me, it’s not a problem.

“I love Manchester United, I love the fans, they’re always on my side. But if they want to do it different… they have to change many, many things.”

Ronaldo was also critical of former United team-mate Wayne Rooney after the Englishman said he is in danger of becoming an “unwanted distraction” at Old Trafford.

Ronaldo said of Rooney: “I don’t know why he criticises me so badly…probably because he finished his career and I’m still playing at a high level.

“I’m not going to say that I’m looking better than him. Which is true…”

Ronaldo, who recently captained United in their 3-1 defeat at Aston Villa, also revealed how former boss Ferguson persuaded him to return to the club last summer.

“I followed my heart,” the five-time Ballon d’Or winner said. “He [Sir Alex] said to me, ‘It’s impossible for you to come to Manchester City’, and I said, ‘OK, boss’.”

Asked what Ferguson thinks of United’s current situation, Ronaldo added: “He knows better than anybody that the club is not on the path they deserve to be.”He knows. Everyone knows. The people who don’t see that… it’s because they don’t want to see; they are blind.”Ten Hag and Man Utd players ‘extremely disappointed’Sky Sports News understands Ten Hag and the Manchester United players are extremely disappointed with the manner and timing of Ronaldo’s interview.The club only found out about the interview as they were preparing to fly back from London on Sunday evening following their 2-1 win over Fulham and they do not understand why he has said what he has said.They are hugely disappointed that he would disrespect the club, his manager and team-mates in this way and United are likely to consider all their options now regarding the player.Ronaldo was told on Thursday that he would not be in the starting XI against Fulham but he would have been in the squad. He told the club he was ill.No one at United has ever criticised or disrespected Ronaldo – even when he refused to come on as a substitute against Tottenham.