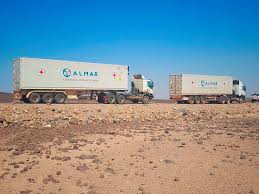 Ethiopia’s Tigray region on Tuesday welcomed the first international aid delivery since a truce to end fighting, with the International Committee of the Red Cross (ICRC) driving two medical trucks to the conflict-ravaged area.

Implementation includes unhindered access for aid to a population facing disease and famine.

“It is an enormous relief for us to deliver this cargo,” Nicolas Von Arx, head of the ICRC delegation in Ethiopia, said in a statement. “The healthcare system in the region is under extreme pressure and these deliveries are a lifeline for people who need medical help.”

The ICRC described the delivery into the regional capital Mekelle as the first international aid into Tigray since a previous ceasefire broke in August.

Half of the region’s 5.5 million people are in severe need of food. Aid agencies say they will not know the true extent of needs until they can access areas for the first time in months.