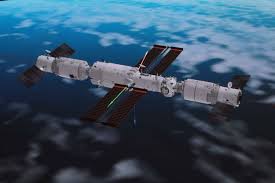 China’s Tianzhou-4 cargo spacecraft re-entered the atmosphere in a controlled manner at 7:21 a.m. Tuesday, according to the China Manned Space Agency (CMS).

Most of the spacecraft’s components burned up during the re-entry, and a small amount of its debris fell into the scheduled safe waters of the South Pacific, the CMS said.

The agency had put out a notice on Monday for the spacecraft’s re-entry, mentioning the location and where the debris would fall.

The CMS on Tuesday also published orbital parameters for the second-stage debris of the Long March-7 Y6 rocket, the rocket that propelled the Tianzhou-5 cargo ship into space last Sunday.

“The China Space Station’s orbital parameters have been made public and space institutions can calculate accordingly,” Sun told CGTN.

The Tianzhou-4 cargo spacecraft successfully detached itself from China’s space station at 14:55 Beijing Time on November 9 after completing a supply delivery mission.

It was launched into space on May 10 from the Wenchang Space Launch Site in south China’s Hainan Province, carrying about six tonnes of supplies to China’s space station.

Its successor, the Tianzhou-5 cargo spacecraft, was launched on Saturday and docked with the space station about two hours after. The Tianzhou-5 is tasked to deliver supplies for China’s space station, the construction of which is expected to be completed this year.