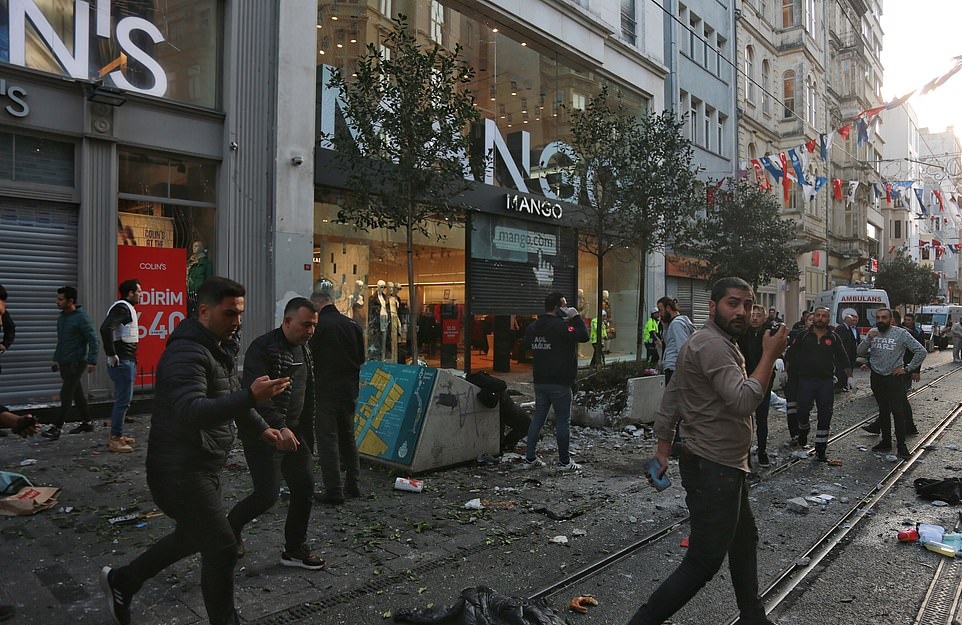 On November 13, a blast ripped through Istiklal street, a busy pedestrian area in the Beyoglu neighborhood of Istanbul.  The explosion killed six people and wounded 81 at about 4:30 pm local time.

Among the dead were Arzu Ozsoy and her 15-year-old daughter Yagmur Ucar, a nine-year-old girl and her father, and a married couple. All were Turkish citizens.

Later, politicians visited the site where a reported 1,200 Turkish flags were displayed along with flower memorials to the victims.

On November 15, Health Minister Fahrettin Koca said 58 of those injured had been discharged after being treated, while 17 were still in hospital, with six more in intensive care.

According to state-run news agency Anadolu, the suspect is a Syrian woman Ahlam Albasir, who after being detained by police had confessed to the bombing and having acted on behalf of the Kurdistan Workers’ Party (PKK) terrorist group. She is claimed to have been trained by the PKK and its Syrian affiliate, the People’s Defense Units (YPG), and she is claimed to have entered Turkey illegally from Afrin, Syria.

The police conducted a raid in the Istanbul suburb of Kucukcekmerce early on November 14, while visiting 21 addresses, and had taken at least 46 people into custody in the course of the investigation into the attack.

The police released on November 16 security footage of a woman wearing a headscarf, camouflage pants, a backpack, and carrying a plastic bag walking across Taksim square on her way to the scene of the blast.  In another security footage, the same woman sits on a bench at 3:30 pm, leaves her backpack at 4:11 pm, walks away towards Taksim square, and when the explosion occurs she runs away from the scene.

Turkish Interior Minister Suleiman Soylu said that police have a phone/audio tape that indicates the PKK had ordered her killing to prevent her capture.

However, on November 14, the PKK and the Syrian Democratic Forces (SDF), which is comprised chiefly of YPG fighters, denied responsibility for the attack.

“Istanbul terror attack suspect would have fled to Greece today if she had not been caught,” said Soylu on November 14.  He was referring to the PKK training camp in Lavrio, south-east Attica, in Greece.  The camp in Lavrio began as a Kurdish refugee camp but evolved into a self-governed camp where even the Greek police and authorities are afraid to enter.

Questions abound concerning if the captured suspect is the same woman in the video.  To wrap up the deadly attack, did the police find the right suspect?  Terrorist attacks in Turkey have come from the PKK for decades, but there is a possibility of other groups such as Al Qaeda and Islamic State (IS).

From 2015 to 2017 the PKK and IS carried out attacks across Turkey.  One such attack also occurred on the same Istiklal street in March 2016, which was carried out by an IS suicide bomber that killed four people.

While the PKK is deemed a terrorist group by Turkey, the United States, and the European Union, Washington allied with the YPG against IS in the conflict in Syria.  The fiercest fighting group in the SDF is the YPG, and they were the fighting partners with the US military, and remain so in the northeast of Syria where the US maintains several illegal military occupation bases.

Turkish President Erdogan and US President Trump, and now President Biden, have long strongly disagreed on the support and alliance given by the US to the separatist Kurdish in Syria, who are administered by the communist ideology founded by Abdullah Ocalan, the imprisoned leader of the PKK.

The PKK has carried out terrorist attacks in Turkey for the last three decades and has killed more than 40,000 people.  The YPG in Syria is directly linked to the PKK.  The Syrian government has control of most of Syria, except the Al Qaeda enclave in Idlib, and the northeast region under the occupation of the SDF and YPG.

Turkey has conducted three invasions into northern Syria against the YPG. Erdogan has long threatened another incursion into Syria to pursue Kurdish targets, and the recent attack in Istanbul may prompt a decision to carry out a new attack into Syria.  The Syrian military cannot attack Turkey for fear of invoking Article 5 of NATO.   Additionally, the Russians are attempting to keep the peace in the northeast region of Syria while negotiating with Turkey on shared interests.

Syrian refugees in Turkey are afraid of the response of the Turkish government to the blast.  Since the prime suspect is claimed to be Syrian, what will that do to the Syrians who are law-abiding refugees inside Turkey?

Turkish political parties have listened to the Turkish citizens who feel that the poor economy is to blame on the Syrian refugees.  The Syrians feel they are no longer welcome as violence and racism against the refugees have become increasingly common.

When Trump asked Erdogan for help in the fight against IS, it was noted by the US and its western allies that Turkey was not forthcoming.  Trump commented publically to the effect that everyone is against IS, but Turkey didn’t share that enthusiasm.

“This attack, if followed by others, could result in the electorate swinging to the right and consolidating around the security candidate,” said Soner Cagaptay, a senior fellow at the Washington Institute, to Al Jazeera.

Cagaptay said, “This is what happened the last time Turkey went through a series of terror attacks in 2015.”  A wave of bombings and other attacks began nationwide when a ceasefire between Ankara and the PKK broke down in mid-2015, ahead of elections that year.

Turkish elections are set for June 2023; polls suggest Erdogan could lose after two decades in power.  Erdogan’s opposition has said they will deport the Syrian refugees if elected.  Erdogan has matched that promise to gain the voter’s waning support ahead of the elections.

Turkish foreign policy towards Syria was ordered by US President Obama ahead of the March 2011 attack on Syria for ‘regime change’.  Erdogan and his AKP party are aligned with the global organization of the Muslim Brotherhood, which stands on the same political platform as Al Qaeda and IS.  This is the political ideology known as Radical Islam, which French President Macron has declared war on.

At the time the US ordered Turkish support of terrorists against Syria, the Turkish exports to Syria equaled all of the combined Turkish exports globally.  Syria later banned all business with Turkey and that began the descent of the Turkish economy.  It is now at its lowest point, with hyperinflation and currency devaluation.

After supporting the international terrorists flowing through Turkey for ‘boots on the ground’ in Syria, Trump cut off in 2017 the CIA and Pentagon programs begun by Obama to support the terrorists fighting for Syrian ‘regime change’.

Recently, Erdogan and his senior officials have voiced publicly their overtures toward Damascus, and their willingness to repair their broken relationship with Syrian President Bashar al-Assad.

Syria became a national security problem for Turkey because Erdogan supported Radical Islamic terrorists who were successful in creating chaos inside Syria which prompted the Kurds to take advantage of the security vacuum to establish a communist administration in the northeast region, which has come back full circle to haunt Erdogan.

President Assad has said before, to be careful when you feed a monster because it can later turn to bite you.