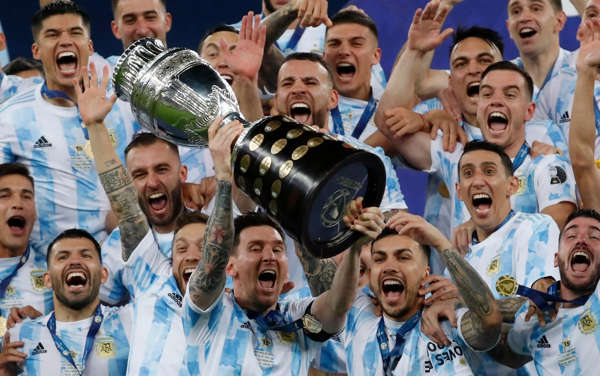 Argentina were far from their formidable best at the 2018 World Cup, a dramatic 4-3 defeat by eventual champions France led to their exit at the Round of 16 stage, and will be aiming to show vast improvements in Qatar.

They came second in their qualifying group without losing a game, three more draws meaning they finished six points behind Brazil, with Lionel Messi and Lautaro Martínez claiming seven goals apiece, but more significantly won their first Copa América for 10 years in 2021, beating their great rivals in the final by virtue of an Angel Di María goal.

Who are their key players?

Until the day he retires from international football (which for a short time in 2016 seemed to have been the case), Messi will always be the standout name in Argentina’s squad. While he didn’t enjoy the most fruitful of campaigns with new club PSG in 2021-22 – at least by his superhuman standards – he is always one of the most dangerous players at the tournament who can produce the moment of magic his country needs.

As well as the captain, Martínez has also been weighing in with his fair share of goals in the lead-up to what will be his first ever World Cup. He has bagged 21 goals in 39 appearances since earning his first Argentina cap back in 2018 and will be hoping to build on a successful domestic season with Inter Milan in the next couple of months leading up to the tournament; Martinez scored 21 goals in 35 Serie A appearances in 2021-22.

One of the more crucial defensive players for Argentina will be Cristian Romero. The 24-year-old made an instant impact in north London after signing for Tottenham in the summer of 2021, making 22 league appearances last season and simultaneously cementing his place as a regular in the national side.

Who, where and when do Argentina play?

Argentina are in Group C along with Poland, Mexico and Saudi Arabia.

What is Argentina’s World Cup record?

Argentina have been World Cup winners on two occasions: 1978 and 1986. The latter, won in Mexico is one of the most iconic triumphs in the tournament’s history with La Albiceleste captained by Diego Maradona, who was at the height of his powers.

In the midst of his successful seven-year spell with Napoli, he created five and scored five, including the infamous Hand of God goal and the mazy 60-yard run later voted ‘Goal of the Century’ in a 2-1 quarter-final win over England.

They also finished runners-up in both 1990 and 2014, losing to Germany, in one form or another, in the final on both occasions.

Argentina are currently a best price of 11/2 to win the World Cup.

Information correct as of November 16.