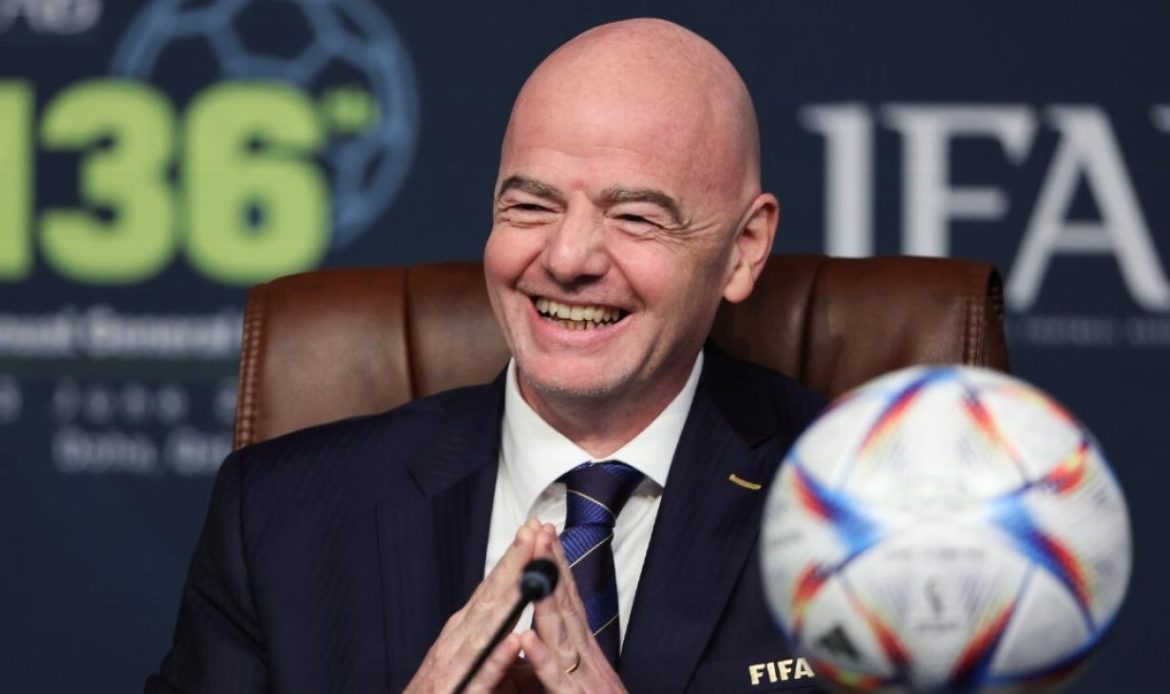 Doha, QatarCNN — The World Cup finally gets underway on Sunday after 12 years of questions and criticisms of the tournament being held in Qatar. But though kickoff for the opening match is just hours away, soccer itself is still being overshadowed by off-the-field matters.FIFA President Gianni Infantino’s extraordinary tirade against Western critics of the controversial tournament in an explosive hour-long monologue is still making headlines around the world. Human rights groups described it as “crass” and an “insult” to migrant workers.Infantino, the boss of world soccer’s governing body, looked on glumly as he addressed hundreds of journalists in Doha, Qatar, Saturday, and started the news conference with a near hour-long speech, during which he accused Western critics of hypocrisy and racism.“We are taught many lessons from Europeans, from the Western world,” he said, referring to criticisms of Qatar’s human rights record.

“What we Europeans have been doing for the last 3,000 years, we should be apologizing for the next 3,000 years before starting to give moral lessons.”

This tournament will be a historic event, the first World Cup to be held in the Middle East, but is also mired in controversy, with much of the build-up focusing on human rights, from the death of migrant workers and the conditions many have endured in Qatar, to LGBTQ and women’s rights.

Those involved in the tournament have faced much criticism. Last week British comedian Joe Lycett questioned David Beckham’s status as a gay icon were the former England captain and Manchester United star to continue in his role as a Qatar World Cup ambassador.

Homosexuality in Qatar is illegal and punishable by up to three years in prison. A report from Human Rights Watch, published last month, documented cases as recently as September of Qatari security forces arbitrarily arresting LGBT people and subjecting them to “ill-treatment in detention.”

Colombian singer Maluma, who features in the official World Cup anthem, walked out of an interview on Israeli television when he was questioned about the Gulf state’s human rights record.

‘Today I feel gay’While Qatar’s team will take on Ecuador in the first game at 11 a.m. ET Sunday, in his remarkable press conference Infantino barely spoke about soccer and focused his attention on what he called the “hypocrisy” of Western criticism.Infantino told journalists that he knew what it felt like to be discriminated against, saying he was bullied as a child for having red hair and freckles.“Today I feel Qatari. Today I feel Arab. Today I feel African. Today I feel gay. Today I feel disabled. Today I feel a migrant worker,” he said, in front of a stunned audience.

“I feel this, all this, because what I’ve been seeing and what I’ve been told, since I don’t read, otherwise I would be depressed I think.“What I’ve seen brings me back to my personal story. I am a son of migrant workers. My parents were working very very hard in difficult situations.”Infantino said progress had been made in Qatar on a range of issues, but insisted real change took time, adding that FIFA would not leave the country after the tournament finished. He suggested that he thought some Western journalists would forget about the issues.“We need to invest in education, to give them a better future, to give them hope. We should all educate ourselves,” he said.“Reform and change takes time. It took hundreds of years in our countries in Europe. It takes time everywhere, the only way to get results is by engaging […] not by shouting.”Human rights groups have criticized the FIFA boss and his speech. Nicholas McGeehan, director of FairSquare, a non-profit human rights organization, said in a statement: “Infantino’s comments were as crass as they were clumsy and suggest that the FIFA president is getting his talking points direct from the Qatari authorities.Steve Cockburn, Amnesty International’s head of economic and social justice, said in a statement: “In brushing aside legitimate human rights criticisms, Gianni Infantino is dismissing the enormous price paid by migrant workers to make his flagship tournament possible – as well as FIFA’s responsibility for it.

Infantino also addressed questions around the last-minute decision to ban alcohol from being sold at the eight stadiums which will host the tournament’s 64 matches. In a FIFA statement issued on Friday, the governing body said alcohol would be sold at fan zones and licensed venues.

The Muslim country is considered to be very conservative and tightly regulates alcohol sales and usage.

In September, Qatar had said it would permit ticketed fans to buy alcoholic beer at World Cup stadiums three hours before kickoff and for one hour after the final whistle, but not during the match.

“Let me first assure you that every decision that is taken in this World Cup is a joint decision between Qatar and FIFA,” he said. “Every decision is discussed, debated and taken jointly.”

“There will be […] over 200 places where you can buy alcohol in Qatar and over 10 fan zones, where over 100,000 people can simultaneously drink alcohol.

“I think personally, if for three hours a day you cannot drink a beer, you will survive.”

“Especially because actually the same rules apply in France or in Spain or in Portugal or in Scotland, where no beer is allowed in stadiums now,” he added.

“It seems to become a big thing because it’s a Muslim country, or I don’t know why.”

Infantino finished the press conference by insisting that everyone would be safe in Qatar, amid concerns from the LGBTQ community.

Homosexuality in Qatar is illegal and punishable by up to three years in prison, but the FIFA president promised that this was a tournament for everyone.

“Let me mention as well, the LGBT situation. I have been speaking about this topic with the highest leadership of the country several times, not just once. They have confirmed, and I can confirm, that everyone is welcome,” Infantino said.

“This is a clear FIFA requirement. Everyone has to be welcomed, everyone that comes to Qatar is welcome whatever religion, race, sexual orientation, belief she or he has. Everyone is welcome. This was our requirement and the Qatari state sticks to that requirement,” Infantino said.