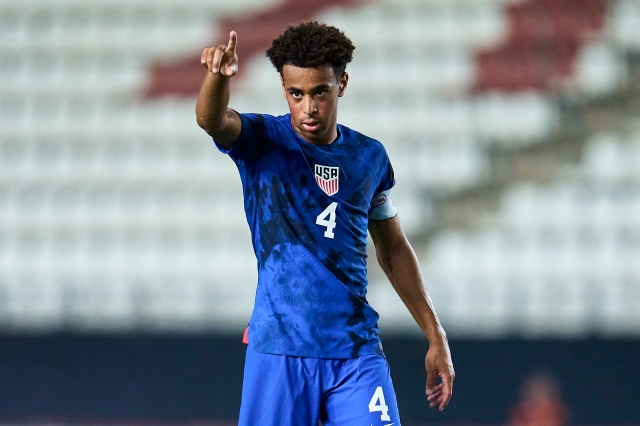 World Cup: Viewer’s guide | Group previews | Top 30 players | Power rankings]DOHA, Qatar — The U.S. men’s national team went 4 1/2 years without a consistent captain, but on the eve of the 2022 World Cup, it named a historic one.Tyler Adams will lead the USMNT out onto the field Monday against Wales (2 p.m. ET, Fox/Telemundo).When he does, he’ll be the youngest captain at this World Cup, and the first Black man to captain the U.S. throughout any World Cup.He was elevated into the role, at 23 years old, by his peers, via a team vote this fall. Adams has previously captained the team nine times, but only for a game at a time, on a rotating basis. The responsibility had, for years, been shared among a players’ “leadership council,” which also features Christian Pulisic, Weston McKennie, DeAndre Yedlin and Walker Zimmerman. Through 56 games under head coach Gregg Berhalter since January 2019, 14 different players had worn the armband.With the World Cup approaching, though, Berhalter went to the leadership council and asked them about the future of the captaincy. They thought it best to name a permanent captain.And Adams, a pitbull-like defensive midfielder from Wappingers Falls, New York, was always the most logical choice. He is a natural leader, with words and by example. “I want to hold the guys around me to the same standard,” he said at a Sunday news conference. “I don’t want to lose and then have to point the finger and say, `you let me down today.’ I just want to make sure that everyone’s on the same page intensity-wise, mentality-wise, no frustration — we all buy into the same thing. And yeah, I think I’ve been doing that since a young age.”

He broke into USMNT in late 2017, at age 18, shortly after an aging group of players failed to qualify for the 2018 World Cup. Ever since, when healthy, he has been a rock in the starting lineup, and a key figure in the USMNT’s youth movement. He moved from the New York Red Bulls to RB Leipzig in Germany, and then this past summer to Leeds United in the English Premier League, where he is already beloved.He is, at 23, the youngest U.S. captain at a World Cup since 1950, but already carries himself like a veteran.He will not quite be the first Black player to wear the armband for the U.S. in a World Cup game; Earnie Stewart did in 2002. But Stewart was deputizing for an injured Claudio Reyna, who returned one game later. Adams, on the other hand, will captain the USMNT throughout the tournament; he’ll be the first African American to do that.And at the Ahmad Bin Ali Stadium on Monday, he will march onto the field at the forefront of the most diverse USMNT ever. Twelve of the 26 players are Black. And that, in what has often been viewed as a “rich white kid sport” in America, is significant.