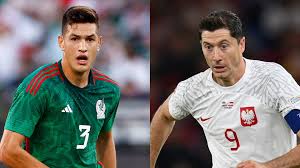 Mexico will kick off its 2022 World Cup campaign against Robert Lewandowski, Piotr Zielinski and Poland on Tuesday at Stadium 974 in Doha, Qatar.

Gerardo “Tata” Martino’s side qualified by finishing 2nd in CONCACAF (one place and three points above the USMNT), as they get set to compete in their 8th straight World Cup.

Poland qualified by beating Sweden in the sides’ UEFA playoff in March. Poland were previously scheduled to face Russia in the semifinals, but Russia were banned from the competition following the country’s invasion of Ukraine, thus Poland advanced in a walkover.

At various points during qualifying, Tata found himself under plenty of pressure as many fans doubted he would still be in charge if/when Mexico took the field in Qatar. Here’s the positive spin on Mexico’s recent World Cup appearances: seven straight tournaments, seven straight times they advanced from the group stage. Now, here’s the negative spin: seven straight eliminations in the round of 16; zero quarterfinal appearances; 0-for-7 after losing to Brazil in 2018. Alexis Vega could be the next Mexican star to make the jump to Europe, and potentially the Premier League, with a strong showing at the World Cup. A number of European clubs, including fellow Mexico star Raul Jimenez’s Wolves, are reportedly interested in the 24-year-old Guadalajara winger.

As for Poland, 2022 will be back-to-back World Cup appearances, on the heels of missing back-to-back tournaments in 2010 and 2014. They were eliminated from the group after two games in 2018, before winning in their farewell appearance on matchday 3. For many of the stars the world has become so familiar with in recent years, this will be their last hurrah, as Lewandowski (34), Kamil Glik (34), Kamil Grosicki (34), Grzegorz Krychowiak (32) approach the finish line internationally. Between them, 414 caps’ worth of experience at a very high level. Poland haven’t been to the knockout rounds of the World Cup since 1986 in, coincidentally, Mexico.