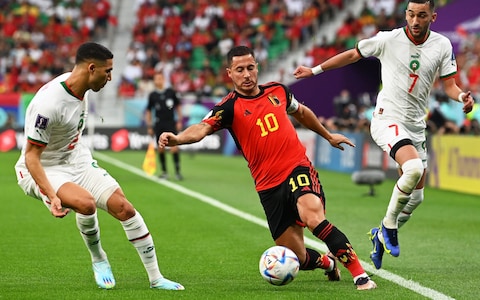 Courtois is the coolest player on the pitch as he successfully attempts a Cruyff turn with En-Nesyri charging down on the goalkeeper, before booting the ball clear.

Better from Morroco – for the first time this match they get their foot on the ball and get into the Belgium half. It comes to Ziyech on the right who cuts in and hits a left-foot shot from distance that doesn’t trouble Courtois.

It’s still all Belgium – they’re dominated possession and territory and there’s a lot of pressure on the Moroccans. As I type Meunier has a low shot from outside the area but it’s straight at Bono.

How would you rate De Bruyne’s start?

Rate him and all the other players on display here.

Another Belgium free-kick, this one from the left, KDB leaves it for Hazard T who hits it low to the edge of the area to his brother who lays it off for KDB. The Man City man hits it first time and it’s well blocked.

That was a well-worked free-kick and Belgium will be happy with how this game has started.

Another corner for Belgium. Hazard T takes it, it’s cleared well before the ball ends up at the feet of Hazard E, but the former Chelsea man is double-teamed by Amrabat and Hakimi.

It’s all Belgium at the moment, they passing the ball well and being patient, waiting for their chance which, for now, isn’t forthcoming.

Morocco haven’t been out of their own half for a while.

Kevin de Bruyne does well on the right and forces the foul in the final third on the right.

The resulting free-kick is floated in well but well cleared by Morocco.

The game has settled from it’s initial slight frenzy. Belgium are playing keep ball and doing it quite well – Morocco are happy to sit deep and gift them possession.

First chance of the game goes Belgium’s way – a lovely run by Batshuayi is picked out by Hazard T and the striker’s shot is well saved.

From the resulting corner Morocco head clear for another corner. This one they clear the other way and the danger, for not at least, is gone for the north Africans.

Early doors but already it’s clear that the Moroccans are looking to the right-hand side of Ziyech and Hakimi.

This is Belgium’s 50th match at the World Cup can they do something special to mark the half-ton?

Good run from Ziyech on the right ends with an overhit low cross. You can hear the Moroccans over the TV – sounds more like Rabat than downtown Doha.

They’re under way at the Al Thumama Stadium, the very least Belgium will want is a much-improved performance after the 1-0 win over Canada.

Optimism is hard to find within the Belgium camp. Kevin De Bruyne has described the team as “too old” to win this World Cup, while Eden Hazard reckons their best chance was four years ago. Their stodgy victory over Canada, in the opening game, did little to suggest these two stars were wrong in their assessments.

We will have a much better idea of Belgium’s standing after this meeting with Morocco, who are a much better team than you might think. An exciting match awaits (hopefully).

Eden Hazard has been fat-shamed

An Egyptian reporter accused Hazard of having put on weight, something the 31-year-old didn’t appreciate, saying: “I can’t say more about that than that it’s not true. My weight is stable and I work hard.”

Who are you backing in this one?

All to play for in Group F

Thanks to Tom Ward for holding fort while I dashed to get a bite to eat after Costa Rica’s mini-shock win over Japan.

So Belgium can secure qualification for the second round with a win over the north Africans this afternoon. Neither Croatia or Morocco can progress or be eliminated today, but a Croatia win over Canada in the 4 o’clock kick-off would put them in a good position to make the round of 16.

Big call upYouri Tielemans is on the bench for this one with Martinez instead turning to 21-year-old Amadou Onana.

“Medically, Romelu was only available for the third game, but he’s ahead of where he should be and the signs are very good.”

“I don’t expect him to be involved on Sunday unless something very good happens today [Saturday].”

Welcome to the Al Thumama Stadium as Belgium and Morocco meet in a crucial Group F clash.

Belgium escaped with a 1-0 win against Canada earlier this week in a match where many felt they were lucky.

The Canadians dominated proceedings for much of the contest, with their inability to find the back of the net eventually denying them the chance of an upset.

Belgium must now re-group and get their start firing against a Morocco side who remain focused on qualification after an opening-match draw against Croatia.

“We are a complete team, we have the best goalkeeper in the world, one of the best midfielders in the world and striker. We have to enjoy moments, we have to play our game, try on the pitch and we’ll see what happens.”

Morocco were defensively rigid against Croatia and will prove a tough nut for the Belgians to crack with Romelu Lukaku still absent through injury.

Hazard though is confident his squad has enough quality to break them down.

He added: “I think the first match was difficult to manage, we had the same experience four years ago.

“Our first game against Panama wasn’t great, we managed to score and things went better. It’s always difficult playing your first match, there’s stress, you don’t want to lose the ball. So you try to hide and not lose the ball.

“But I’m not worried. I know we have great players who can cause problems for the opponent. We went to get the ball to Kevin, to Youri (Tielemans), they’re our danger players. I’m pretty confident actually.”

Join us from 12 for full team news.