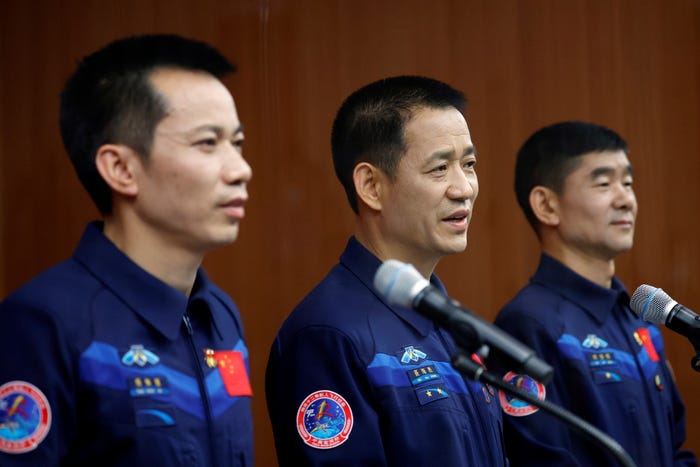 China will launch the Shenzhou-15 crewed spaceship on Tuesday evening, sending another batch of three taikonauts to the orbiting China Space Station (CSS), the China Manned Space Agency (CMSA) said at a press conference on Monday.

A Long March-2F Y15 rocket carrying the spaceship is scheduled to blast off at 11:08 p.m. Beijing Time from the Jiuquan Satellite Launch Center in northwest China, said Ji Qiming, spokesperson for the CMSA.

Taikonauts Fei Junlong, Deng Qingming and Zhang Lu have been selected to carry out the Shenzhou-15 space mission, with Fei serving as the mission commander. They will live and work in the space station for six months and return to Earth in May next year.

The Shenzhou-15 mission, the last one in the construction phase of the CSS, will mark the first crew handover in the newly completed three-module space station.

After entering orbit, the spaceship will make a fast, automated rendezvous and dock with the front port of the space station’s core module Tianhe.

The crew members will be greeted by the three Shenzhou-14 taikonauts currently aboard the space station. The two teams will stay together for about a week, before the Shenzhou-14 crew head back to Earth.

CSS to be expanded

With the arrival of the Shenzhou-15 spaceship, the space station will be expanded to its largest configuration formed of three modules and three spaceships, with a total mass of nearly 100 tonnes, Ji said.

During their stay in orbit, the Shenzhou-15 taikonauts will witness the arrival of the Tianzhou-6 cargo spacecraft and Shenzhou-16 manned spaceship. The team will also have a handover with the upcoming Shenzhou-16 crew in orbit.

During the six-month mission, the Shenzhou-15 crew members will complete various tasks, according to Ji.

Firstly, they will verify the space station’s capability to support taikonauts’ long-term stay.

Secondly, they will unlock, install and test 15 experiment cabinets, and carry out more than 40 scientific experiments and technical tests in the fields of space science research and application, space medicine and space technologies.

Besides, they will conduct three to four extra-vehicular activities to complete tasks including the installation of expansion pumps for the Mengtian lab module.

In coordination with the ground team, the crew will also complete six cargo transfers, moving cargo out of the space station from the airlock cabin.

In addition, they will carry out daily management and maintenance of the space station along with in-orbit exercise and training.

Astronauts from other countries are welcome to conduct experiments in the CSS, Ji said, adding that many countries have applied to send astronauts to participate in spaceflight missions to the CSS, and the CMSA is coordinating with relevant countries on it.

The country has conducted various forms of exchanges and cooperation with other space agencies and international organizations, he noted.

Space science projects selected by China, the United Nations Office for Outer Space Affairs and the European Space Agency are being implemented as planned, and relevant payloads will be sent to the space station for experiments starting from next year, Ji added.

The Shenzhou-15 adopted the configuration of Shenzhou-14 with three modules. An orbital module, one for re-entry and service module.

“A new batch of spaceships started to be used since Shenzhou-12 mission,” said Diao Weihe, chief designer of the manned spaceship system at the 5th Academy of China Aerospace Science and Technology Corporation.  “So now it’s Shenzhou-15, which reaches the maximum reliability as it’s already the fourth one of the batch.”

Diao elaborated that the team has made some improvement to enhance the Shenzhou-15’s capability. “We  optimized the layout inside the spaceship and its ability for re-entry to Earth.”

The taikonauts can enjoy more fresh fruits this time as they packed more for this mission, added Diao.

He also said the team has prepared plans for the spaceship in different phases including lifting off, docking, separation and returning to secure the taikonauts’ safety in the mission.

A Long March-2F Y15 will be carrying the Shenzhou-15 spaceship for the mission. The rocket is among the new batch of the Long March-2F carrier rockets with upgrades and it’s also the first time it will collaborate with the new ground facilities at the launch pad.